Something for the weekend, Sir? (all on the NHS!)… RICHARD LITTLEJOHN on handing out free condoms to the over-60s

The government department which meets with the sole purpose of giving this column something to write about has been working overtime again this week.

How else would they have decided to hand out free condoms to the over-60s on the NHS?

You couldn’t make it up.

Our old friends at Public Health England have really done the bizzo this time. They’re behind a pilot scheme in Derbyshire aimed at distributing rubber johnnies to ‘Silver Singles’ via, and I quote, ‘GP surgeries, community venues and food banks’. 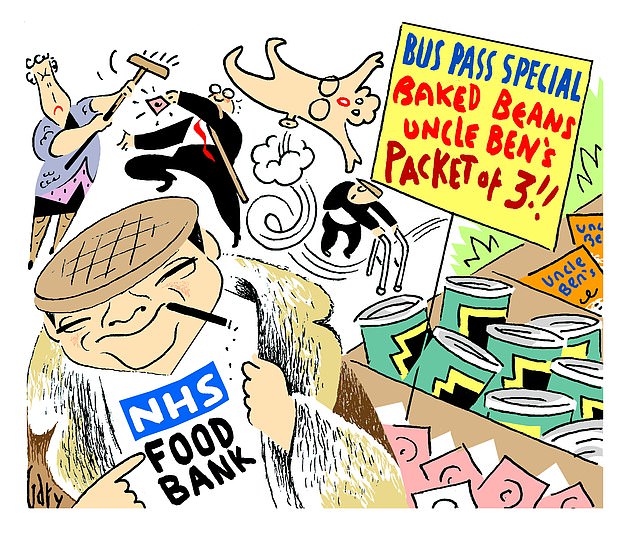 Our old friends at Public Health England have really done the bizzo this time. They’re behind a pilot scheme in Derbyshire aimed at distributing rubber johnnies to ‘Silver Singles’ via, and I quote, ‘GP surgeries, community venues and food banks’

Run that by me again. They’re giving away packets of three at food banks?

‘Just nipping down the food bank, love. Anything we need? Righty-ho, tin of baked beans, half a pound of tuppenny rice and some of those knobbly Durex.’

Presumably, it’s the flavoured variety they’ll be handing out with the Heinz 57.

By way of full disclosure, I should tell you that one of the most lucrative night’s work I ever did was making an after-dinner speech to the annual sales conference of the London Rubber Company, getting on for 25 years ago. To be honest, I don’t enjoy after-dinner speaking, but they were paying eight grand and offering a chauffeur-driven Jag there and back, so it would have been rude not to.

Frankly, the whole gig put me right off after-dinner speaking for life. You can’t do 20 minutes of rubber johnny jokes to an audience consisting of people who spend their lives replenishing vending machines in public toilets.

They’ve heard them all before and, anyway, it’s not a job for anyone with a sense of humour, when you come to think about it.

To say that I died a death would be an understatement. During the meal I was sitting next to the marketing director, an earnest woman about my age.

In the interests of making small talk, I asked her how they tested the flavoured condoms, having recently spotted that the Gents in my local pub in North London had just started knocking them out in a selection of exotic flavours, including Malibu and Mivvi.

‘We have tasting panels,’ she said, with a completely straight face.

‘Do you take part?’ I wondered.

‘Oh, yes. We sample them after lunch in the boardroom.’

There’s no answer to that, as Eric Morecambe used to say. Sounds like the sort of work the BBC wine buff Jilly Goolden would have enjoyed. ‘I’m getting hints of saffron and smoked haddock.’ But I persevered.

‘One thing that’s always puzzled me,’ I said. ‘All these flavours, pina colada, lager and lime, walnut whip, etc. Why don’t you do cheese and onion?’

Without missing a beat, she gave me a quizzical look and said: ‘No call for it.’

That was the moment when I knew the evening wasn’t going to end well.

Oh, and I’ve still got a souvenir of the evening, which they presented to me on the night, mounted on a wooden plinth.

It’s a stainless steel cylinder they use to pass an electric current through the condoms to make sure they don’t leak.

About 15 inches tall, and four inches in circumference, this fearsome projectile is obviously modelled on the device described in the old rugby song, An Engineer Told Me Before He Died. I defy any man to look at it without being overwhelmed by a shrivelling sense of gross inadequacy.

Anyway, I digress. If I’d written a column back then predicting that one day the NHS would be giving away condoms at food banks to the over-60s, the editor would have called me into his office, probably summoning security at the same time.

You’ve gone too far this time, Rich. How about a sabbatical? Or a drying-out clinic?

But here we are in Austerity Britain, 2019, where the allegedly cash-starved NHS is giving free rubber johnnies to anyone eligible for a bus pass.

Why Derbyshire, for a start, m’duck? Are they all at it like rabbits in the East Midlands? And why the over-60s, most of whom are probably thanking their lucky stars that they don’t have to use condoms any more?

The official line is that, thanks to social media, the over-60s are having more casual sex than ever and, as a result, baby boomers are suffering from an epidemic of sexually transmitted diseases.

You can spot the walking frames leaning up against the rustling bushes in the park. Swipe left for a Nora Batty lookalike.

Well, that’s their excuse and they’re sticking to it. They’ve even come up with a catchy slogan for the campaign.

Can you imagine the committee meeting called to discuss that?

‘Ladies and gentlemen. We’re planning to give away rubber johnnies to old age pensioners, but we need a name for it. Any suggestions?’

‘How about Jiggle, Wiggle?’

What will the NHS be giving away next — those inflatable dolls, from Only Fools And Horses?

Still, it should do wonders for the bottom line of manufacturers like the London Rubber Company, or whatever it calls itself these days.

Something for the weekend, sir? Help yourself, they’re free.

Prior to this new injection of taxpayers’ cash from the NHS, the Aids scare in the Eighties was the best thing to have happened to the condom industry, after sales fell following the invention of The Pill.

During the miners’ strike in 1984, one of my Evening Standard colleagues was billeted in a bed & breakfast in Rotherham, or somewhere like that.

On the first night, he found himself invited to share the bed of his landlady, a formidably enthusiastic woman of mature years — like Michael Caine’s landlady in Get Carter.

When he was telling us the tale over a beer back in Fleet Street, someone said: ‘I do hope you practised safe sex.’

‘No bother, there,’ he replied. ‘Couldn’t have been safer. She was far too old to have babies.’

All you need to know about the diseased state of British politics is that Tom Watson, Labour’s Deputy Leader, is being talked up as a voice of moderation.

In a world of deranged fanatics like O.J. Corbyn and Soubry Loo, two-bob spivs like Chucky Umunna, the hopeless Mother Theresa, and anti-democratic planks of wood like Spread Fear Phil and Dominique Grievance, I can see how Watson might appear to some as a sensible alternative.

In common with Bonking Boris, he lost a bit of timber when he took up with a bird half his age. And he scrubs up quite well these days.

But I didn’t dub him the Nonce Finder General for nothing. Watson is guilty of abusing parliamentary privilege to smear blameless Conservatives as child-molesters. Don’t forget, too, that he had his nose deep in the expenses scandal trough.

The new model Turbo-Butter Tommy is also a sworn enemy of our Free Press, which he wants to hobble and bring under State control. Please don’t be fooled. Watson remains a very bad, mad and dangerous man, utterly unsuited for high office.

If he’s one of life’s ‘moderates’ we must be in more trouble than we thought.

My colleague Ephraim Hardcastle reports that Elton John has ‘chosen’ pretty boy actor Taron Egerton, whoever he is, to play him in an upcoming movie. I’m assuming Angela Merkel wasn’t available.

It’s a game we’ve all played. Who would portray us in our own movie? My old picture byline looked like Peter Sellers starring as Fred Kite in I’m All Right, Jack. 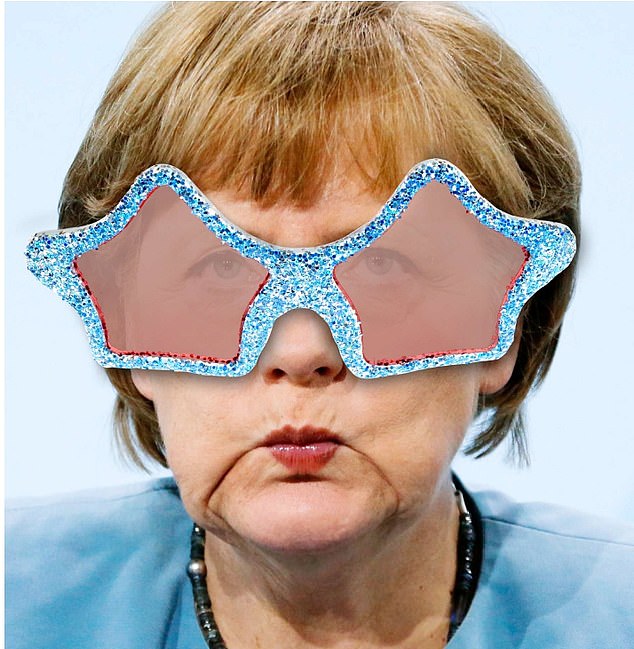 My colleague Ephraim Hardcastle reports that Elton John has ‘chosen’ pretty boy actor Taron Egerton, whoever he is, to play him in an upcoming movie. I’m assuming Angela Merkel wasn’t available

Years ago, I accepted that the role of your Uncle Rich would probably be best suited not to a young Paul Newman, but the great Michael Elphick, shortly before he drank himself to death.

Dear old Mike is the only man I’ve ever seen carried in to a boozer.

Occasionally, we get to see ourselves as others see us. Recently, I had to have a new passport photo taken.

When it emerged from the printer, I realised that, far from being the spit of some Hollywood matinee idol, these days I look like one of the Hatton Garden safe deposit robbers.

Thieves have stolen more than £120,000 from parking meters, sucking out the cash using heavy-duty vacuum cleaners.