Millions are facing pensions pain: Retirees could miss out on up to £430 a year with Government plan to axe ‘triple lock’ as Liz Truss clings to power

Millions of pensioners could face an income squeeze of up to £430 next year after Liz Truss ditched her pledge to protect the ‘triple lock’.

In a surprise U-turn, Downing Street warned she was no longer committed to raising pensions in line with inflation, despite having guaranteed just that only two weeks ago.

It said the Prime Minister was now ‘not making any commitments on individual policy areas’ ahead of the Halloween Budget – when ministers need to find £40billion in cuts.

One option being considered by the Treasury is for pensions to rise in line with earnings rather than inflation, meaning an increase of 5.5 per cent instead of 10 per cent.

That would cost pensioners £8.35 a week, or £434 a year, but save around £4.5billion a year, according to the Institute for Fiscal Studies. The proposal sparked an immediate backlash, with Age UK warning of a ‘betrayal of our older population’.

Tory MP Nigel Mills said it was ‘ridiculous’ not to keep the triple lock, which guarantees that the state pension will rise in line with either inflation, earnings or 2.5 per cent – whichever is the highest. He warned the move could cost the party at the next election because so many older people vote Tory.

‘The idea that people on a fixed income would not get an increase in line with inflation is preposterous,’ said Mr Mills, who chairs the all-party group on pensions. ‘It’s not like they can go back to work after being retired for 20 years to earn the shortfall. I hope someone gets a grip on this pretty quickly and this is just a mis-speak because it’s ridiculous. 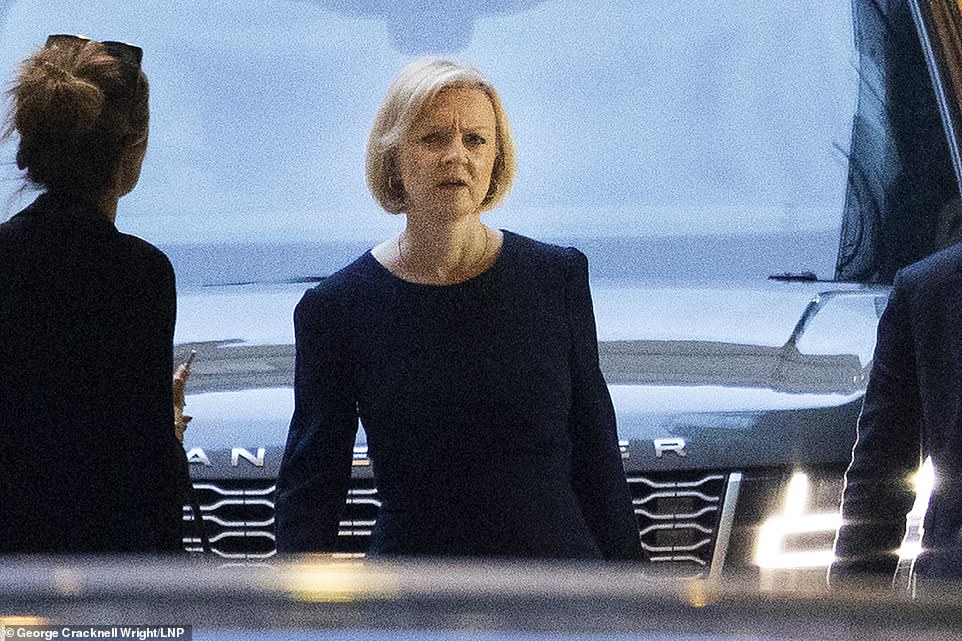 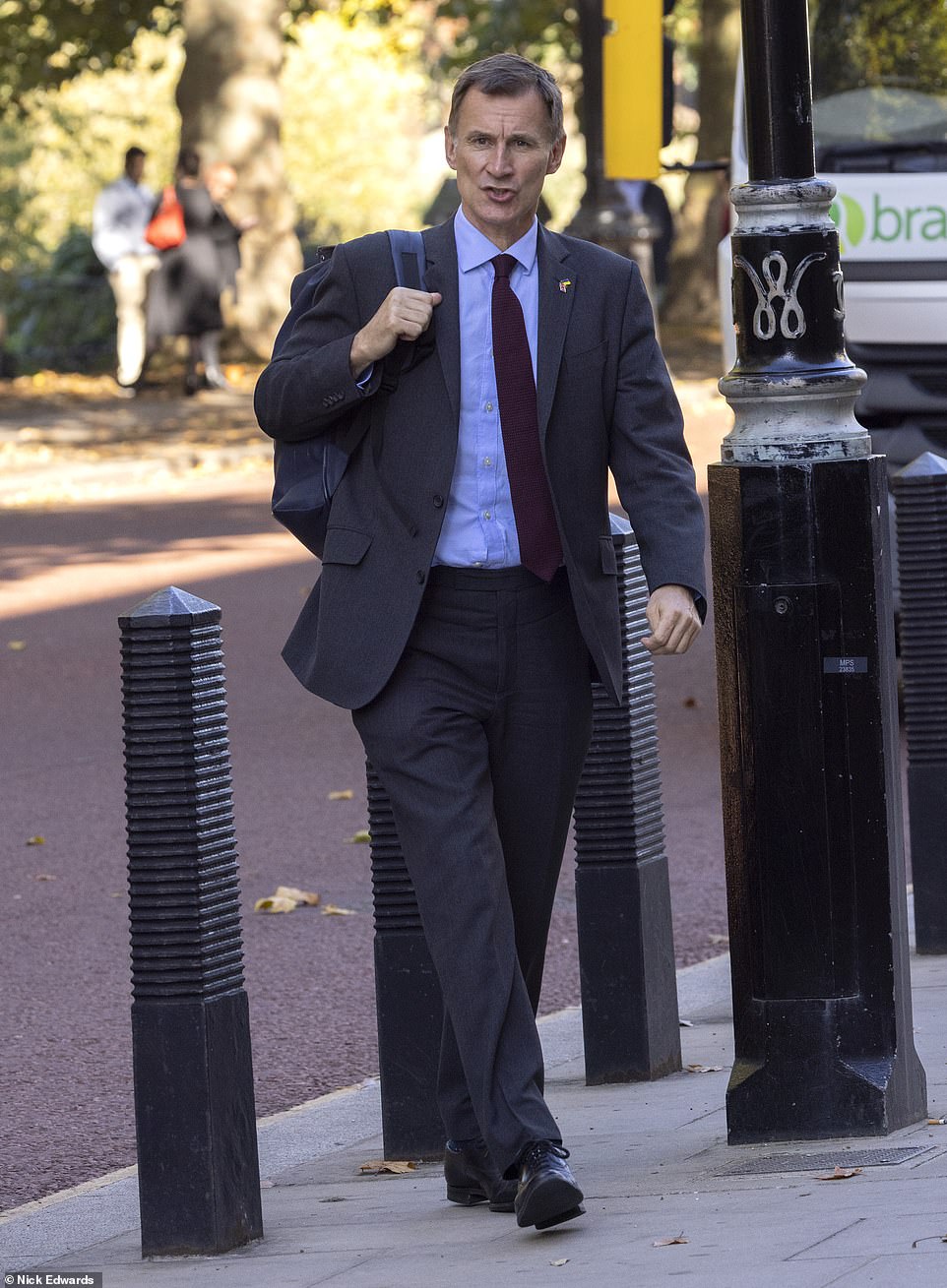 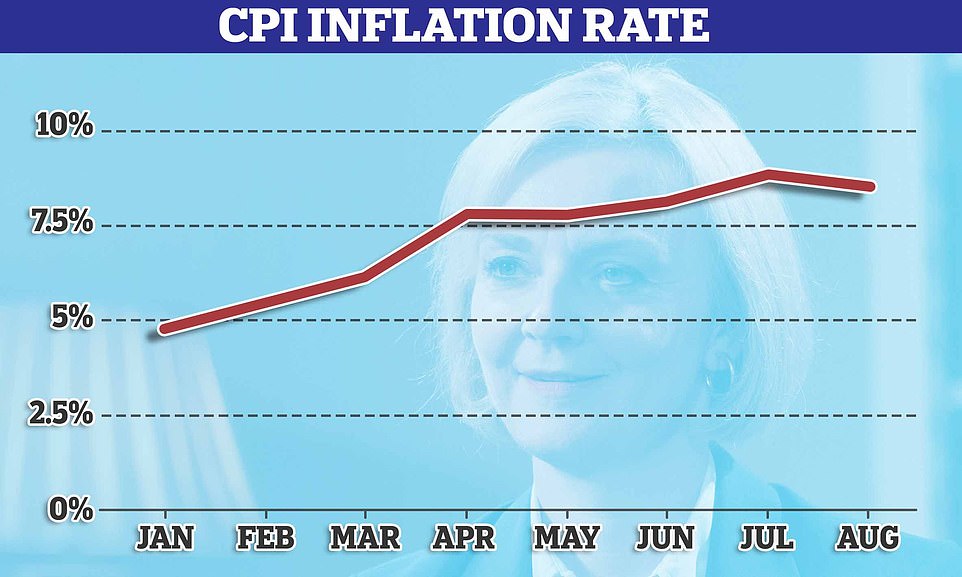 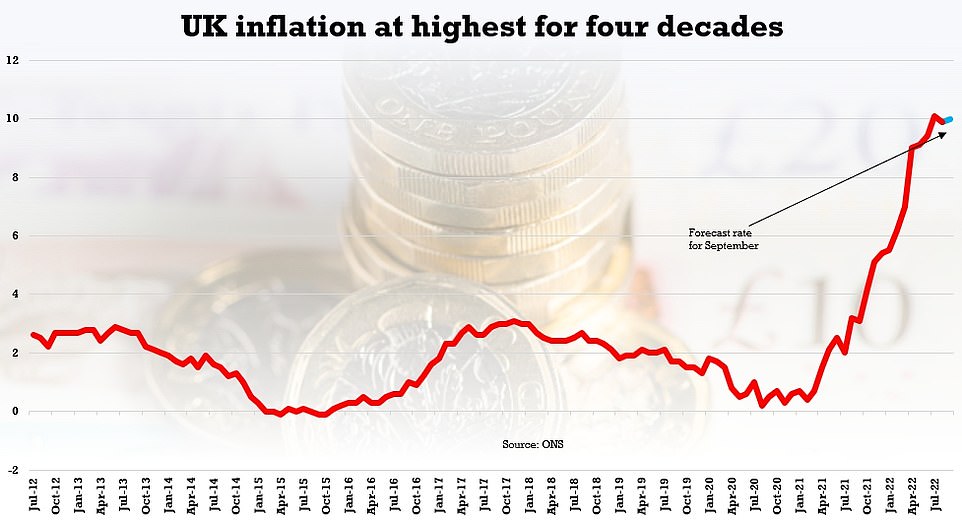 Former minister Maria Caulfield warned any attack on pensions would have trouble getting through parliament: ‘I will not be voting to end the pensions triple lock. Pensioners should not be paying the price for the cost of living crisis whether caused by the war in Ukraine or mini-Budgets.’

Fellow Tory Steve Double said: ‘We understand the Government needs to balance the books, which has been made harder as a result of the disastrous mini-Budget. But the most vulnerable and least well off should not be the ones who pay the price to do so.’

The warnings came as:

Introduced in 2010, the triple lock was suspended this year in the wake of the pandemic but was due to return next year.

During the Tory leadership contest, Miss Truss confirmed she would restore the policy, saying: ‘I won’t fudge the figures. I’m fully committed to the triple lock, which gives the highest rate.’

Speaking at the Conservative Party conference this month she confirmed she was ‘committed’ to the policy.

But, asked whether the policy still stood yesterday, her official spokesman said: ‘We are very aware of how many vulnerable pensioners there are and indeed our priority ahead of this fiscal plan is we continue to protect the most vulnerable in society.

‘The Prime Minister and the Chancellor are not making any commitments on individual policy areas at this point but, as I say, the decisions will be made through the prism of what matters most to the most vulnerable.’ No 10 said the decision to review the pledge was a ‘mutual decision’ by the PM and Chancellor. Cabinet Office minister Brendan Clarke-Smith told Times Radio that pensioners could ‘breathe easy’ as the triple lock was a manifesto commitment.

But Government sources confirmed that the future of the mechanism was under review. If the lock was dropped the new state pension of £185.15 per week would rise to £195.35 rather than £203.70.

Treasury sources said Mr Hunt was considering a range of options, including whether the triple lock should be suspended for a further year, or possibly longer.

Some ministers believe the huge package of energy support should be taken into account when considering next year’s pension payments. A source said: ‘A large part of the inflation faced by pensioners is energy, and they are getting a lot of help separately with that. It is fair to consider that as a factor.’

Another senior Tory said capping pensions in line with earnings would make it easier to do the same with benefits – a move that could save at least £3billion more.

The source said: ‘You can make the case in these exceptional circumstances no one should be getting a bigger increase than the average worker.’

But Caroline Abrahams of Age UK said the pensions triple lock was a Tory manifesto pledge that Miss Truss had committed to ‘in the clearest possible terms’.

She added: ‘If she reneges on it now it will be a betrayal of our older population, and hurt those on low and modest incomes the most. Let’s be clear, anything less than the triple lock would mean a real terms cut in the state pension, which is only worth on average about £9,000 anyway, yet comprises the bulk of the income of most older people.

‘Many older people are already deeply apprehensive about how they will get through the winter as prices continue to soar, so any decision to break the triple lock promise would be a huge blow.

Give Liz a chance! Top Tories tell colleagues the Prime Minister and her Chancellor ‘deserve time to set out economic strategy’ and urge them to hold off on plot to oust her until end of the month

BY HARRIET LINE DEPUTY POLITICAL EDITOR FOR THE DAILY MAIL

Senior Tories have told rebel MPs they must wait until Halloween before trying to remove Liz Truss from office.

Party grandees want the Prime Minister to be given a chance to turn her perilous position around in the upcoming Budget on October 31.

Miss Truss received a warm reception from Brexiteer backbenchers in the European Research Group last night – despite having ditched many of the tax-cutting plans they campaigned for.

ERG chairman Mark Francois said the meeting had been ‘positive’, adding: ‘She was open. She answered every question that she was asked directly.

‘And as you will know, colleagues in the ERG aren’t necessarily hesitant about asking questions. And so she was very clear in the answers that she gave.’ 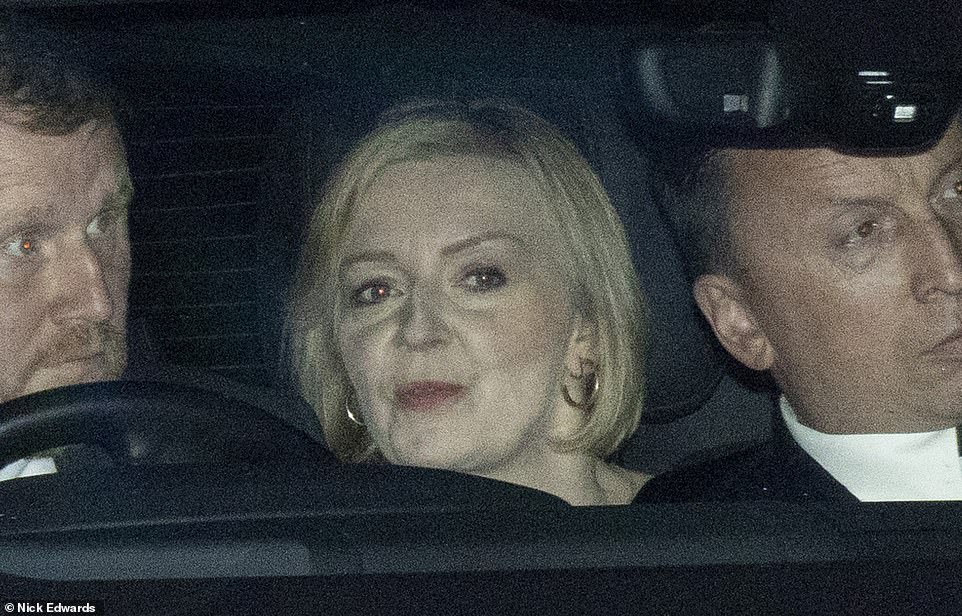 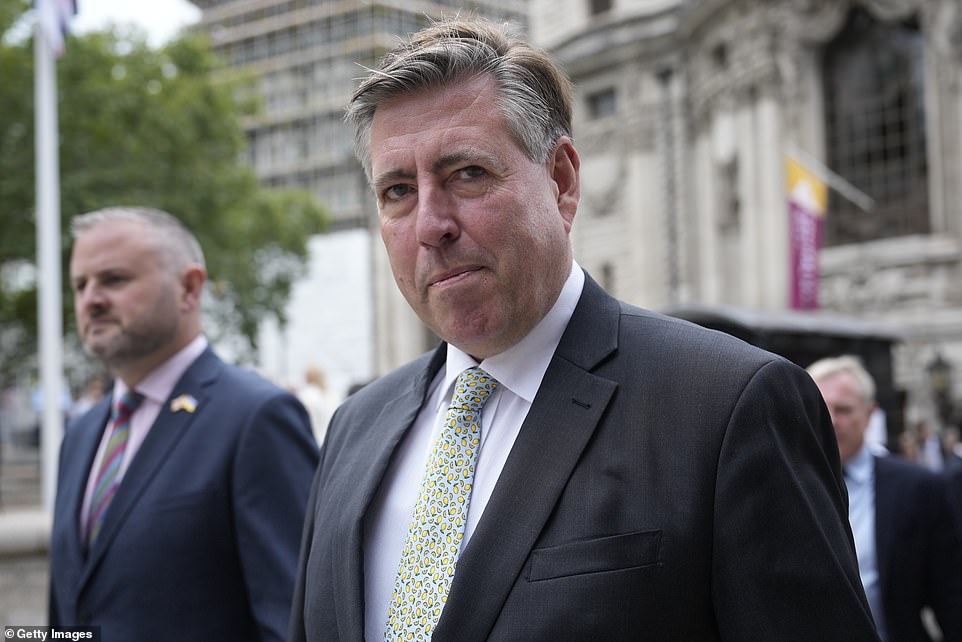 Many rebels are pressing Tory shop steward Sir Graham Brady to tell the Prime Minister her time is up, or change the party rules to allow an immediate vote of confidence in her leadership

The PM told them that she found it ‘painful’ to have to perform a U-turn on her agenda, but she did it ‘because she had to’.

But she was warned by a senior minister yesterday that she cannot afford to make any more mistakes as she battles to stay in No 10.

Armed forces minister James Heappey said that ‘given how skittish our politics are’ at the moment ‘I don’t think there’s the opportunity to make any more mistakes’.

He told Sky News that Miss Truss had ‘fronted up to her mistake very quickly’ but ‘there are people in the parliamentary party who don’t want that to be the end of it’.

However, he also insisted many Tories recognise that ‘this is a moment when this country needs its Government to knuckle down and get back on with the day job’.

Several backbenchers believe the Budget on October 31 will be the crunch point.

‘I think that is the really decisive moment when we see what the Government strategy is and how much change Jeremy Hunt has made to it all,’ a senior Tory said.

Many rebels are pressing Tory shop steward Sir Graham Brady to tell the Prime Minister her time is up, or change the party rules to allow an immediate vote of confidence in her leadership.

But Sir Graham, chairman of the 1922 Committee of backbench MPs, is said to be resisting an immediate putsch, arguing that the PM and Chancellor Jeremy Hunt deserve the chance to set out their economic strategy.

Mr Hunt will use the Budget to backtrack on a raft of previous tax cutting plans after his predecessor Kwasi Kwarteng’s mini-Budget shook the market.

Senior Tory backbencher Tobias Ellwood said the Government conducted an ‘experiment’ with the economy that did not go well.

But there was a ‘calmer’ Westminster compared with the past few days and weeks, as ‘we have got back to understanding what the Conservatives usually do well’.

It came as Conservative former minister Liam Fox warned yesterday that market forces will be ‘the judge and jury’ of the Tory party under Miss Truss’s leadership.

Describing the Prime Minister as ‘very chastened’, he said: ‘We now need to recognise that Conservative governments really have a long-term task, which is the sound management of public finances.

‘I think that will be the judge and jury of us. We need to make sure that, given the huge borrowing that we took on in the pandemic, with the furlough scheme – making sure that we kept businesses afloat and we kept jobs alive – and now the increased costs, obviously, of the intervention on fuel, which was planned to be £91billion, which was half of what we spend on the NHS in a year.

‘These are not small funds, and they have to be paid back sometime, and the finances have to be balanced.’

Conservative former minister Sir John Redwood added: ‘I want this Government to show unity between the Prime Minister and Chancellor around a growth strategy that will work.

‘If we have too deep a recession, then we will borrow far too much money.’

No 10 last night told Tory MPs it was ‘the time to unite and deliver stability’. In a message leaked to LBC Radio, it said: ‘Our full focus now must be on delivering stability for the British people, not talking to ourselves about ourselves…

‘If we do not unite as a party, the alternative is putting the Labour-led anti-growth coalition into power.’

Mr Canzini, a Tory party veteran and ardent Brexiteer, had attended her meeting with the ERG.

‘No 10 wanted more operators dedicated to outreach and ensuring messages were landing with colleagues. Great decision.’