A YouTube star has found herself at the centre of a race row over her interviews with celebrities’ in fast-food spots.

Amelia Dimoldenberg, has been accused of being involved in ‘mocking black culture’ over her role as host of Chicken Shop Date, a tongue-in-cheek interview series.

The show sees the 28-year-old go on awkward ‘first dates’ with famous people in a place styled like stereotypically British ‘chicken shops’.

Celebrities such as Louis Theroux, Ed Sheeran, Daniel Kaluuya, Keke Palmer and Jade Thirwell have all appeared on the popular show, with some videos in the series being viewed more than 10million times.

But she has come under scrutiny after US comic Andrew Schulz accused her of being a ‘white girl who takes black people to eat chicken’. 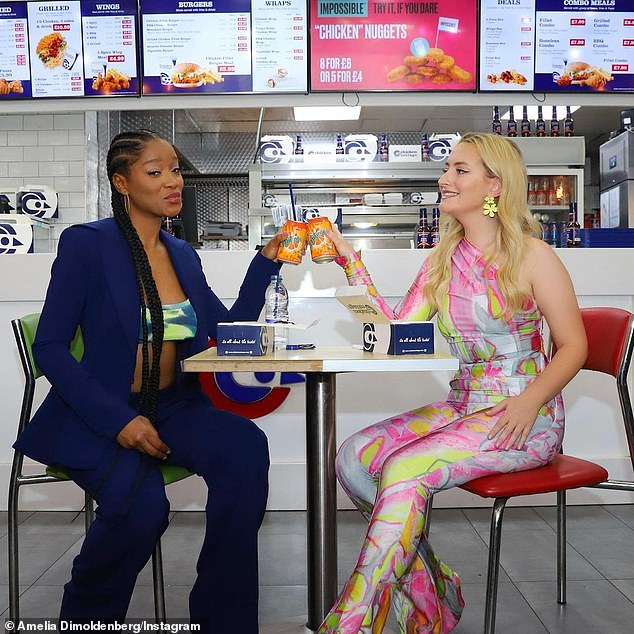 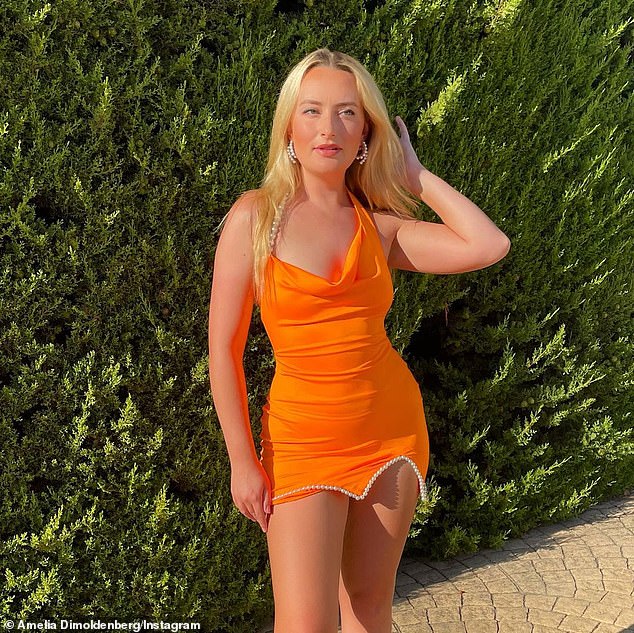 Dimoldenberg (pictured) has become popular for her YouTube show, which has seen her interview the likes of Daniel Kaluuya, Louis Theroux and Ed Sheeran 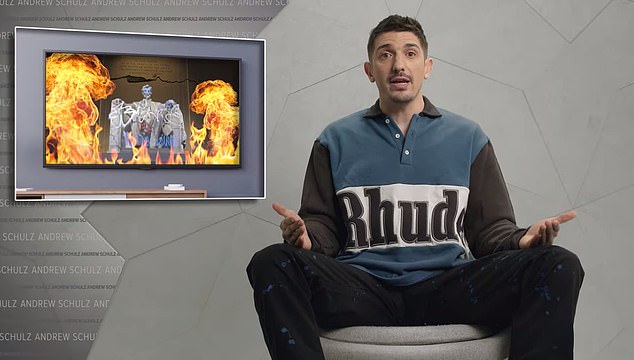 On a podcast with British YouTuber KSI, the 38-year-old asked ‘is that not weird a little bit?’, a reference to a racist trope in the United States that stereotypically eat fried chicken.

In footage from the interview, he says: ‘I was like “hold on, what is the premise of this show?”

‘A white girl who takes black people to eat chicken. I was like “what is happening in Europe right now?”

A laughing KSI, whose real name is JJ Olatunji, replies: ‘Actually, I didn’t even think about it like that. Bro it’s just clicked in my head.’ 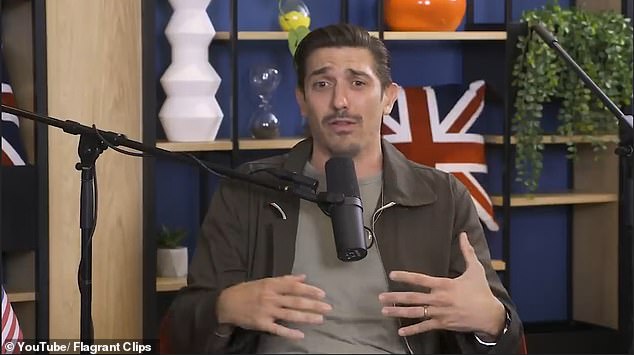 Schulz made the comments on a podcast (pictured), where he asked ‘what is happening in Europe right now?’ 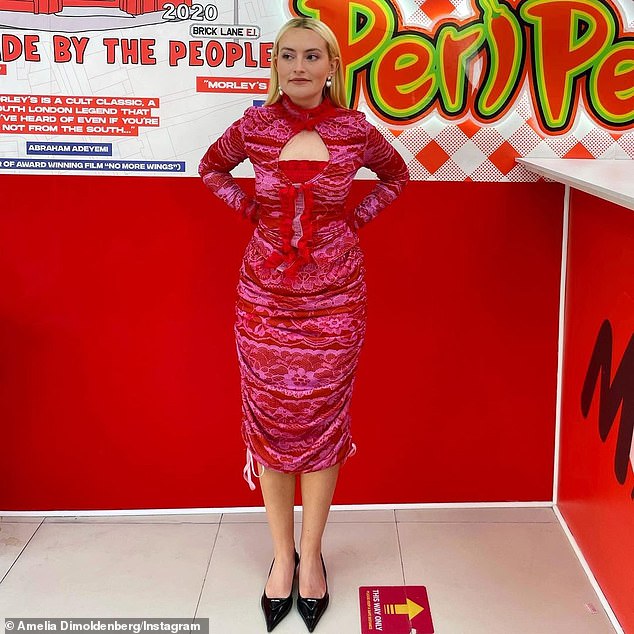 Schulz, speaking over him, replies: ‘There’s this blonde white girl going “look how much these black people love chicken!”‘

Schulz himself is no stranger to being involved in race storms – in 2020 he was criticised for making jokes perceived as being anti-Asian.

In a show he branded Covid ‘the Asian parasite’ and the ‘Wuhanic Plague’, and said ‘Chinese viruses have killed almost as many people as Chinese dictators’.

He also called Chinese president Xi Jinping ‘Winnie the Flu’ – a reference to the country’s banning unflattering comparisons between the politician and the fictional character.

His comments have contributed to an ongoing debate on social media, where Dimoldenberg has been accused of being someone who ‘cleverly uses the juxtaposition of an awkward white girl in a chicken shop as her whole gimmick’.

In an article about the why the show makes some people uncomfortable on feminist website Refinery29, writer Shaznay Martin said: ‘The conversation is really about white privilege and access. People are wondering why it’s so easy for white people to enter and succeed in our cultural spaces.

‘Particularly, when many Black creatives and Black talent in the UK media industry are struggling to secure gigs and be seen, whereas white people can gain status and visibility in minutes.’

She added: ‘At the end of the day, no one is calling for her to be flogged or de-platformed, but it’s important for us to be able to have these conversations and critique this very unlevel playing field of an industry we are in.

‘Perhaps it might not be such an issue if everybody was being fed, but it’s clear that some feel that there are too few seats at the table for a white person to take up a whole chair.’ 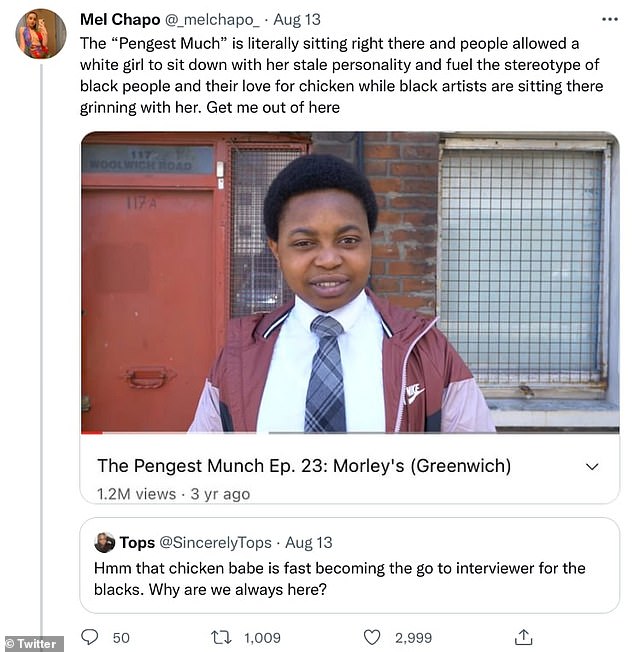 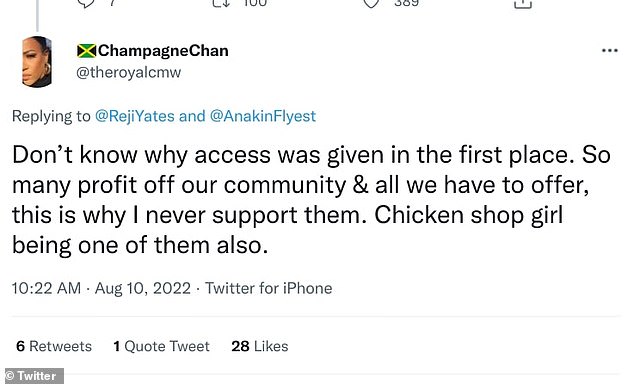 @cinetamaris said: ‘I would also like to add Amelia’s presence allows a voyeuristic lens for white ppl to experience blackness without having to support black ppl. she says she’s aware of her privilege but if u are, why continue a show whose entire premise is mocking black culture?’

@_melchapo_ said: ‘The “Pengest Munch” is literally sitting right there and people allowed a white girl to sit down with her stale personality and fuel the stereotype of black people and their love for chicken while black artists are sitting there grinning with her. Get me out of here.’

@theroyalcmw added: ‘Don’t know why access was given in the first place. So many profit off our community & all we have to offer, this is why I never support them. Chicken shop girl being one of them also.’

But some have come to Dimoldenberg’s defence, saying she ‘deserves her popularity’ and that people didn’t have a problem with it until it became a hit in the US. 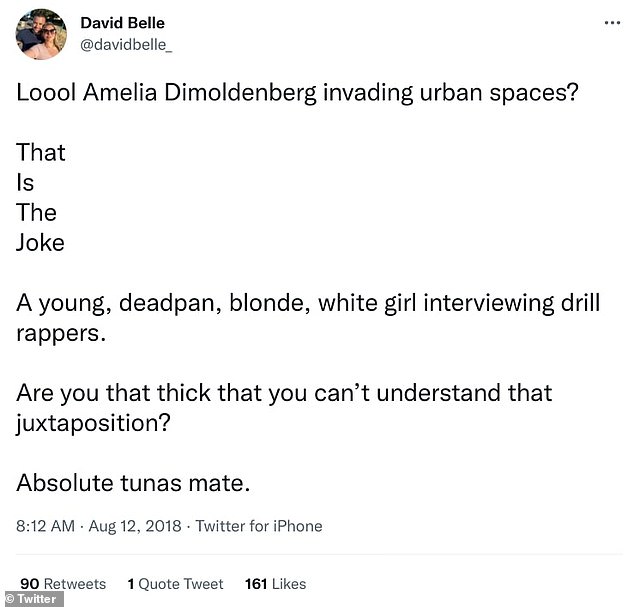 @Badbadman2000 said: ‘First it’s not a black thing, chicken shops are a London thing – it’s London culture. Secondly, she came up with a unique proposition, comedy interviews in a very un-date like place. She deserves her popularity. Leave her alone man.’

@333_m1a wrote: ‘All I’m saying is, no one had an issue with Chicken Shop Date until it became popular in America x’

And @davidbelle_ added: ‘Loool Amelia Dimoldenberg invading urban spaces? That Is The Joke. A young, deadpan, blonde, white girl interviewing drill rappers. Are you that thick that you can’t understand that juxtaposition? Absolute tunas mate.’