The government had an obligation to all Victorians in a pandemic, including the elderly, not just to businesses which would suffer economic losses, lawyers have argued in the Supreme Court in their attempt to get two COVID-19 class actions thrown out.

The separate class actions have been brought on behalf of retail businesses, and people who lost work in last year’s second-wave lockdowns following outbreaks in hotel quarantine. 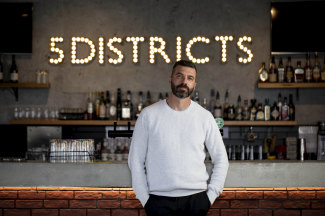 5 Districts NY owner Anthony Ferrara: “We are calling to account those who put us in this dire position.”Credit: Arsineh Houspian

Lawyers acting for the state are in the midst of a two-day application before Supreme Court judge Justice John Dixon to get the cases thrown out of court.

Lead plaintiffs Keilor Park restaurant 5 Districts NY argue the government was negligent in its response to the pandemic, and held a duty to take reasonable care to ensure that effective infection prevention and control measures were implemented in hotel quarantine.

“They weren’t up to snuff, they weren’t effective and the consequences were the virus escaped and stage three and above restrictions were imposed,” Wendy Harris, QC, told the court on Monday.

In the second class action, the lawyers – led by John Richards, QC – acting for a 21-year-old who lost his job, say the state had a duty to take reasonable care in hotel quarantine with the procurement and supervision of guards, and to provide infection-control training and supervision. 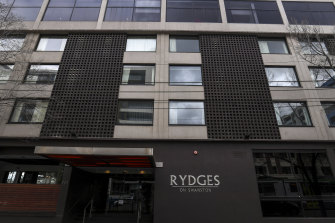 There was a failure, Mr Richards argued, to procure police or defence force troops like other states did.

The 21-year-old plaintiff Jordan Roberts installed roadside crash barriers and lost his $1100 a week job. The class action includes people who owned and worked at businesses impacted by the shutdowns including licensed premises, gyms, beauty salons and real estate agencies.

Both cases allege from May last year, the virus spread into the community and caused the state’s lengthy 15-week lockdown because hotel quarantine failed.

Victoria’s second wave of COVID-19 claimed more than 800 lives and caused four months of tough restrictions including a night-time curfew, widespread commercial shutdown and a ban on leaving home for anything but limited exercise and essential supplies. 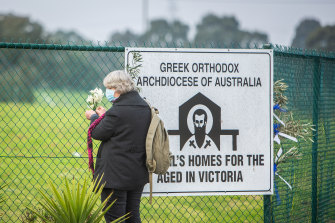 Outside St Basil’s aged care home in July, which became the site of one of Victoria’s deadliest coronavirus outbreaks last year.Credit:Scott McNaughton

Lawyers for the plaintiffs in the two class actions do not say how that transmission occurred, but called on Justice Dixon to draw an inference from the genomic sequence and epidemiological evidence that linked most of the second wave back to the hotels.

But lawyers for the state said there was a disconnect that “fatally infects” the cases.

They argued the state, which included the health and jobs ministers and their secretaries, did not have a duty of care to avoid economic loss when restrictions were imposed by a chief health officer independently exercising a discretionary power.

Rachel Doyle, SC, said decision-makers were discharging public health duties for all Victorians, including the elderly and ill, and not just for those who had commercial interests.

It was not appropriate, Ms Doyle said, to impose liability for economic loss on a state exercising powers in the aid of public health.

“That in seeking to discharge that purpose and obligation to all Victorians, it would serve to distort the attainment of that objective of those responsibilities if it had to prioritise the commercial interests,” she said.

Ms Doyle said the plaintiffs must establish what the standard of care was for hotel quarantine, a system which had never before been established.

In law, there were “well-trodden paths” and a “suite of experts that could be rolled out” in court to establish standards of care for injuries sustained in surgery. 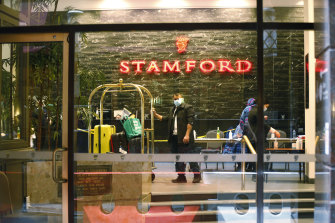 Hotel workers inside the Stamford Plaza, one of the quarantine hotels that became the site of an outbreak last year.Credit: Getty Images

This was not the case for hotel quarantine, and Ms Doyle said the standard established had to be the one at the time of the breach, and not by today’s knowledge, in an environment where the standard changed almost weekly (for example, masks not being worn to masks being worn).

Ms Doyle also called on the plaintiffs to establish what would have happened if defence force troops or police were used instead of private security.

The lawyers for the plaintiffs will respond to the application on Tuesday.

Meanwhile, a man has faced court charged with incitement over allegations he encouraged people to leave their homes during last year’s COVID-19 lockdown and attend a “freedom day” protest in Melbourne.

Fanos Panayides, 38, is one of several charged with inciting others to protest against anti-lockdown measures, and police allege he used a Facebook page to encourage people to leave their homes in breach of state laws.

Mr Panayides, of Epping, appeared before Melbourne Magistrates Court on Monday, via a video link, and had his bail extended to appear again on August 24.