Want to buy a ghost town? This house is for sale with an Old West town hidden in the backyard – complete with a saloon, jail and barbershop

A buyer apparently looking for a spot to hang up their spurs is purchasing a home with three bedrooms, five bathrooms  – and an entire Wild West town in its backyard.

Potential buyers for the five-acre property in Woodinville, Washington, off State Route 9 and surrounded by trees, will be transported to a bygone era complete with an onsite saloon, jail, barbershop and grocery store.

Real estate agent Kari Haas of Windermere Real Estate told DailyMail it is the ‘coolest property [she] has ever sold,’ and that more 100 people have toured the site since it came on the market two weeks ago.

A cash offer above the $1.8 million asking price was accepted and closing is expected next week. Haas would only divulge that the buyer was not ‘a single person or a family.’

A previous owner has removed the bar and other features from the saloon, along with the wall that divides it from the barbershop.

You can see where a desk, heat source and cell bars were inside the jail building, but they too have been removed by previous owners. The 1,000-square-foot row of buildings are connected to each other by a secret hallway in back, Haas said. 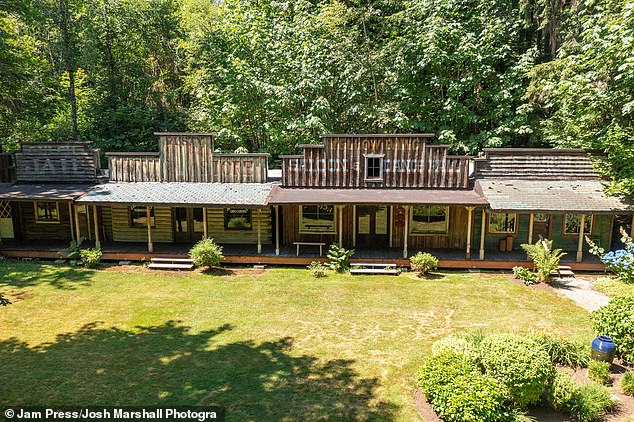 Built in the 1800s, the components of the little ghost town were hauled to the Woodinville parcel from the tiny rural community of Silvana, which currently houses 90 residents. 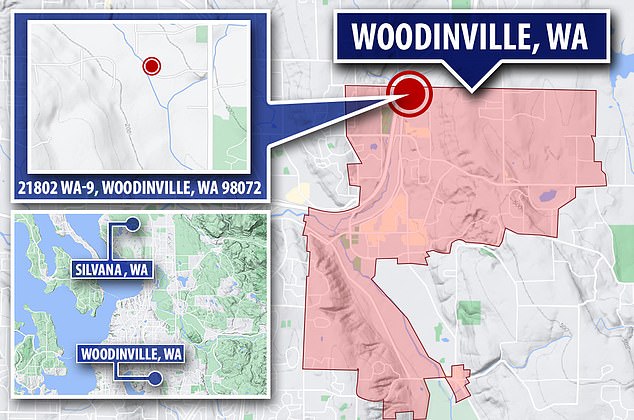 The buildings were shipped in from rural community of Silvana, a bona-fide ghost town with 90 current residents about an hour north where the buildings now stand 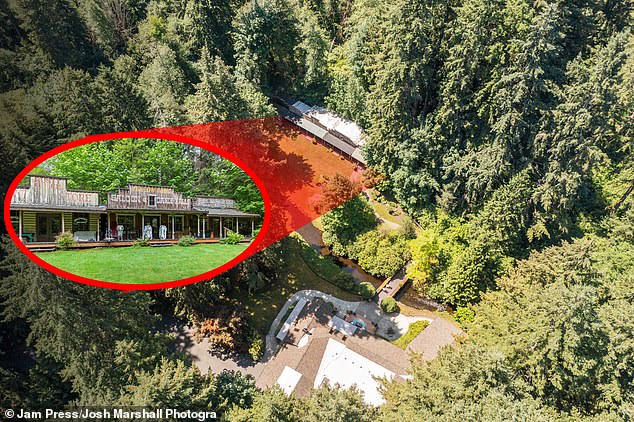 Built in the 1800s, the components of the little ghost town, which sit in the back yard of a more traditional home, were hauled to the newly listed property in Woodinville from the tiny rural community of Silvana, still standing and home to just 90 residents, by original owner Walter H. Jones in 1959.

When Jones began erecting the town neighbors clamored to get a look, according to a 1963 article in the Northshore Citizen.

Along with importing the slice of the past, Jones, who bought the land in 1948, gave the property itself a history of its own. He created Jones’ Fantastic Museum, an ever-growing collection of sideshow oddities that ended up part of the 1962 Seattle World’s Fair.

Gradually, his 500-square-foot cabin ballooned to 3,679 square feet to accommodate more of his collections, Haas told the Daily Mail.

‘[Son] Rin Jones told me that his dad would collect stuff so his mom would be like “there’s too much stuff,” so [Walter] would build another room onto the log home,’ Haas said.

Although the oddities have been auctioned off and sold since Jones’ death, the resulting huge cabin and its little Western town remain.

But at the time, as word of the unique project spread, and more and more visitors came, the eccentric homeowner abandoned his hardware manufacturing business, according to the Citizen, to collect oddities full-time.

‘I’m just trying to bring back some of the glamor, illusion and fakery of the old time medicine man shows and sideshows,’ he said to the local publication. 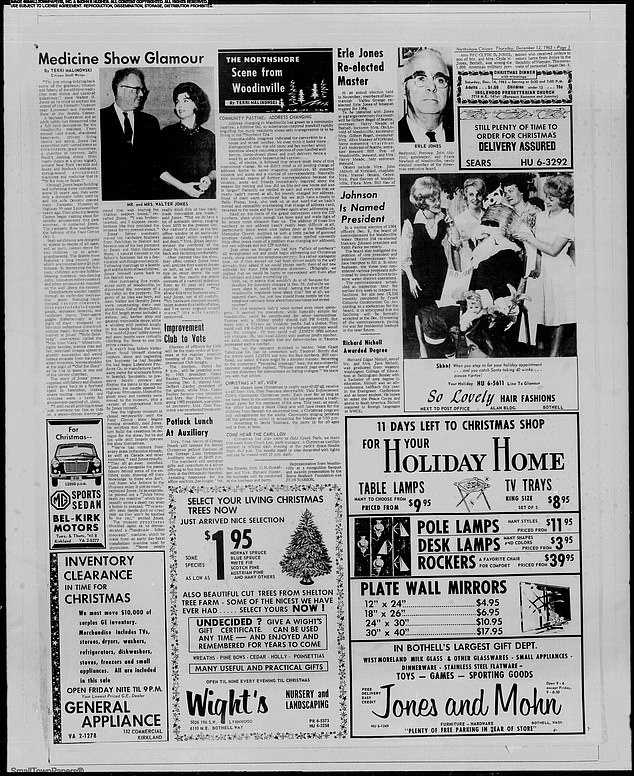 When original owner Walter H. Jones began erecting the town after buying the land in 1948, neighbors clamored to get a look, according to a 1963 article in the Northshore Citizen . 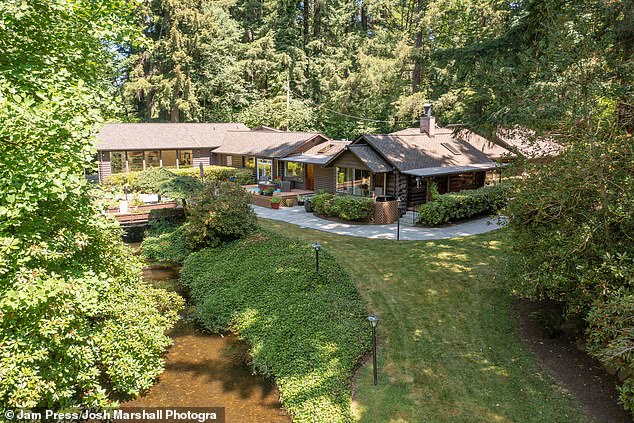 The cabin on the property was built in 1933, and was expanded gradually by Jones to reach its current square footage. The property also features winding gardens, trails and a romantic bridge over a creek running through the parcel. 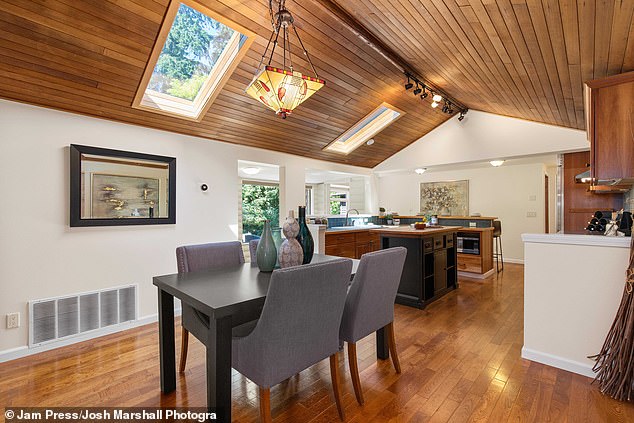 Gradually, his 500 square foot cabin on the property ballooned with new additions to 3,679 square feet in an ongoing effort to create more space for his collections, agent Kari Haas of Windermere Real Estate told the Daily Mail. 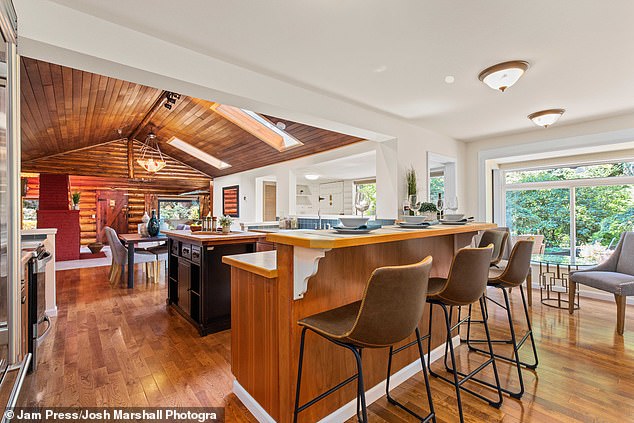 Tentatively, an offer above the $1.8 million asking price has been extended, in cash, and will close next week. She would only divulge that the buyer was not ‘a single person or a family.’ 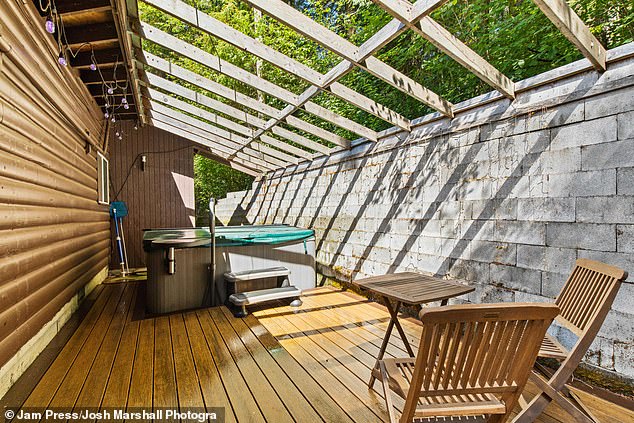 ‘[Son] Rin Jones told me that his dad would collect stuff so his mom would be like “there’s too much stuff,” so [Walter] would build another room onto the log home.’

Among this ‘stuff’: thousands of newspaper clippings and antiques, mannequins sporting extra arms and legs, funhouse mirrors, P.T. Barnum-style stuffed cryptids like the ‘Abdominal [sic] Snow Woman,’ a chamber of horrors and a ‘Death Ray.

‘Those who recognize the patent fakery behind some of the exhibits enjoy showing off to those who don’t,’ said Jones in the article. ‘Those who believe in the illusions enjoy it just as much.’

Also included in the parcel, where Jones’ family lived until the early 2000s, are winding hiking trails, looping gardens, and a river spanned by a romantic bridge.

The subsequent and current owner Nathan Clarenburg hosted events and ran a bed and breakfast called ‘The Streamhouse’ on the property. Now in his 60s, Clarenburg decided to sell the large property to someone who could better maintain and use the space.

‘He is sad to do it because he loves it – it’s not that much upkeep, but it’s a lot for one person,’ Haas said.

Haas said that the property is zoned for ‘anything but a strip club,’ allowing for its strange features. Seven cars can fit in the home’s garage, while more than 40 vehicles can be parked outside, according to the listing.

Thirty minutes away from both Seattle and the nearest airport, it is home to heron, owls, bobcats, coyotes and bears. Haas said the site’s location should not be overlooked.

‘When you’re on the bridge and looking at the little bear creek, it’s unbelievably peaceful,’ she told DailyMail. ‘There’s trout and salmon in the creek and it’s a really cool place.’