WASHINGTON — An Arizona man who became the target of online conspiracy theories after joining protesters outside the Capitol on Jan. 6 told a House committee that he wasn’t secretly working for the government during the attack and that the campaign against him has torn apart his life.

Ray Epps told the Jan. 6 committee that the theory that he was working for the FBI never made much sense, given that Epps’ image landed on an FBI poster in the immediate aftermath of the attack. He wasn’t working for the CIA, or the NSA, or the D.C. Metropolitan Police Department, he said.

“The only time I’ve been involved with the government was when I was a Marine in the United States Marine Corps,” Epps said.

Epps, who was a supporter of former President Donald Trump, said in the interview released Thursday that his grandchildren were being “picked on at school” because of his actions. He’s gotten death threats. His business dropped. People have shown up at his house.

“We had a tour bus come by our home and our business with all these whacked out people in it,” Epps said. “There are good people out there that was in Washington. Those aren’t the people that’s coming by our house. This attracts — when they do this sort of thing, this attracts all the crazies out there.”

The night before the attack, Epps was seen on video telling other Trump supporters that they needed to go into the Capitol. Epps told the committee that he was under the impression that the building, which was closed to the general public because of COVID restrictions, would be open.

“The Capitol is the people’s house and the rotunda — people can go into the rotunda and — and see what’s happening there. My vision was, get as many people in there as we can and surround it, be there, let them know that we’re not happy with the — with what — what has happened, and that was it. No violence,” Epps said. “I never intended to break the law. It’s not in my DNA. I’ve never — I’m sure you’ve looked up my record. I don’t break the law.”

Epps’ view of whether he could go into the building, he said, changed on Jan. 6. Body camera video shows Epps asking law enforcement officers how he can assist them, offering to help move rioters back from the police line and away from the steps. He turns towards members of the crowd and tries to get them to calm down. Another rioter, one of the first to breach the barricades, also told authorities that Epps told him to “relax“ and that police were just doing their job. 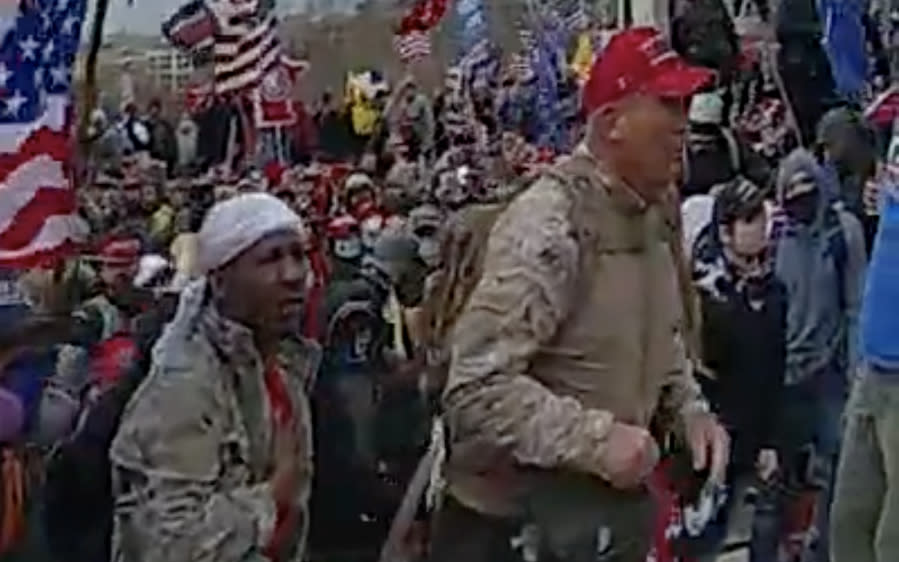 Epps left after assisting a man who was having a medical episode, he said. “I just looked around, and I was sick. There was a lot of tear gas, a lot of bad stuff going on,” he indicated he helped bring the man further away from the building and propped him up against a tree, and was about to call 911, but the man waved him off. He said he left at that point.

“I saw people crawling all over the Capitol, climbing the walls. It made me kind of ill to my stomach… there was no point in going back. It had gone beyond to what I wanted it to be,” Epps said.

Epps previously spoke with The New York Times about what happened on Jan. 6, and the Jan. 6 committee released a statement following their Jan 21, 2022, interview with Epps dismissing the conspiracy theories floated by other members of Congress.

In his interview with the Jan. 6 committee, Epps explains a text he sent to his nephew at 2:12 p.m. on Jan. 6 saying he was upfront and “orchestrated” things, Epps explained, he didn’t know what was happening. At that moment, a rioter was smashing in a window to the Capitol, but Epps said he was no longer at the Capitol complex.

Even after telling the committee how conspiracy theories had torn apart his life, Epps continued to repeat other unfounded claims about the 2020 election including that “antifa” had infiltrated the mob.

Epps specifically pointed to Reps. Thomas Massie, Matt Gaetz, and Marjorie Taylor Greene as members who spread lies about him.

“I mean, it’s real crazy stuff, and [Massie] brought that kind of stuff to the floor of the House. When that happened, it just blew up. It got really, really bad,” he said. “Him and, gosh, Gaetz and Greene, and, yeah, they’re just blowing this thing up. So it got really, really difficult after that. The crazies started coming out of the woodwork.”Epps did not place a similar level of blame on Trump, who has also spread the conspiracy theory, telling the committee that he thinks the former president was being fed bad information.