Pregnant Theranos founder Elizabeth Holmes could serve only half of her 11 year sentence, it was reported on Friday – as former employees of the collapsed company said they were pleased she was handed a hefty sentence.

Holmes, 38, sobbed as she was sentenced by US federal judge Edward Davila, telling the court that she ‘tried to change the world.’

Yet it remains possible that Holmes, who plans to appeal, will only serve half her sentence, and could be free in five years.

‘Thanks to good time credits and the First Step Act — which she is eligible for — she will probably serve about half of that time,’ said Matthew Keys, a journalist reporting on the trial.

The First Step Act was passed by the Trump administration in December 2018, with the title standing for: ‘Formerly Incarcerated Reenter Society Transformed Safely Transitioning Every Person.’

Under the act, prisoners are given the opportunity to get a shortened sentence for positive behavior and job training. They can gain up to 54 days of credit against their sentence for each year they serve if they behave well behind bars.

She left court after the sentencing and was ordered to surrender on April 27, but that could be affected by the birth of her second child. It’s unclear when she is due to give birth, but she appeared heavily-pregnant Friday.

Former colleagues of Holmes said they were relieved Judge Davila sided with prosecutors, who sought a 15-year sentence, instead of listening to pleas for clemency from Holmes’ partner Billy Evans, father of their one-year-old son and unborn child. 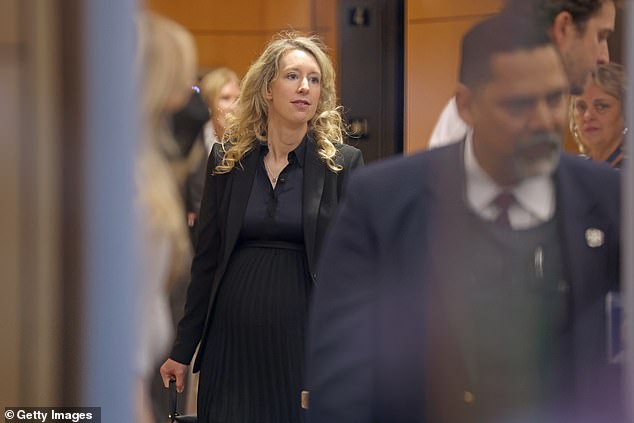 Elizabeth Holmes is seen on Friday arriving in court for her sentencing. She was handed 11 years – less than the 15 years the prosecutors requested, but more than the nine years recommended by probation officers 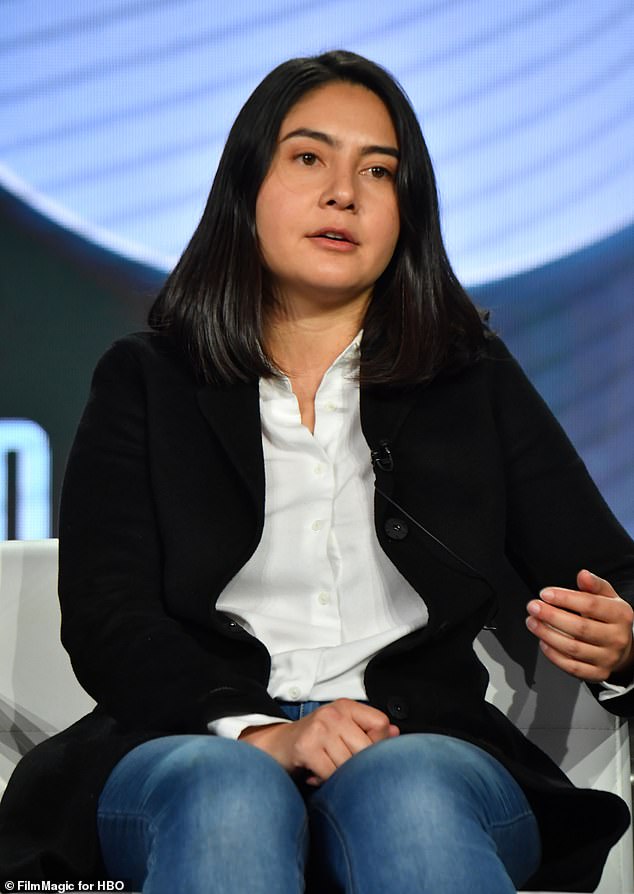 Erika Cheung, who worked at Theranos, said she was pleased with the sentencing of her former boss

Erika Cheung, a former Theranos lab worker who challenged the company’s technology, only to be met with threats from its lawyers, said she hoped the sentence sent a strong message.

‘Hopefully, it sends a signal that we need to start by taking more responsibility and more accountability in the tech industry because of the influence they have over people’s lives,’ she said.

‘It is just sad. There are no winners. It didn’t have to be this way.’

Brad Arington, a regulatory lawyer and Theranos’s former privacy officer, agreed that the sentencing sent a strong signal – noting that lives were ripped apart by her lies.

‘She was never held accountable,’ he said.

‘There is a sense that she is finally being held accountable. For many of us, there is some sense of closure because of that accountability.’

On Friday, Holmes, dressed in a dark blouse and black skirt, was surrounded by her friends and family, who hugged her in the courtroom after her sentence was handed down.

She has 14 days to file an appeal. 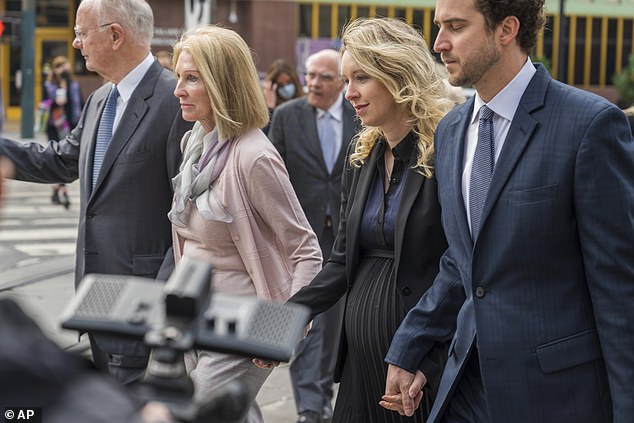 Theranos CEO Elizabeth Holmes arrives at federal court in San Jose, California, on Friday with a federal judge sentencing her to 11 years in prison 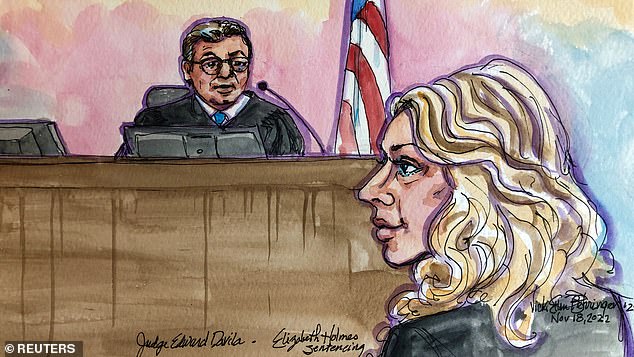 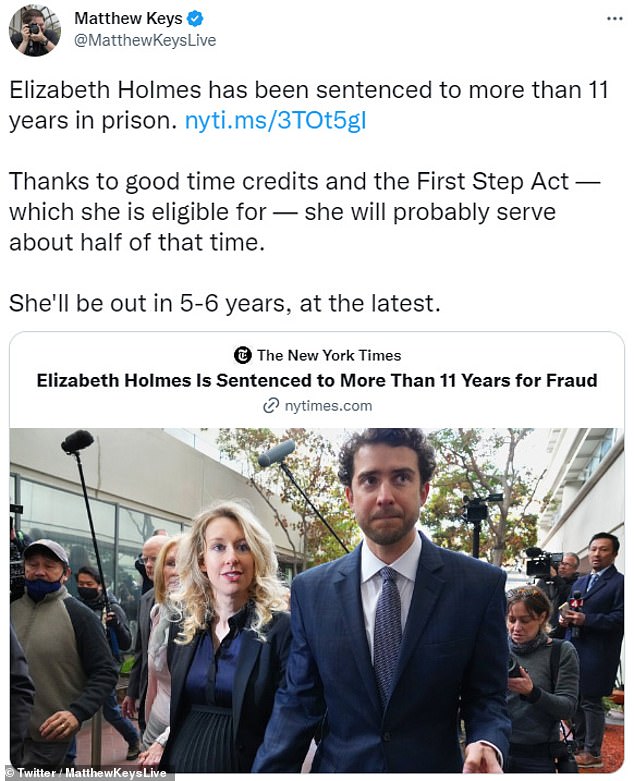 During the hearing, Holmes cried and said she was ‘devastated’ by her failures and would have done many things differently if she had the chance.

‘I have felt deep shame for what people went through because I failed them,’ she said.

Sentencing Holmes, Davila said: ‘This case is so troubling on so many levels. There’s no question that Ms. Holmes is bright.

‘Was there a loss of a moral compass here? The tragedy of this case is Ms. Holmes is brilliant.

‘Failure is normal. But failure by fraud is not OK. What is the pathology of fraud? Is it the inability to accept responsibility? Perhaps that the cautionary tale to come from this case.’

Holmes and her family remained silent as they walked into the court building, holding hands with Evans, her partner.

She was allowed to remain seated during the proceedings.

Addressing the court, Holmes broke down in tears, saying: ‘I stand before you taking responsibility for Theranos. I loved Theranos. It was my life’s work.

‘There are so many things I would do differently if I had the chance. I tried to realize my dream too quickly.

‘Yesterday I tried to change the world. Today, I’m wise, and want to change myself.’ 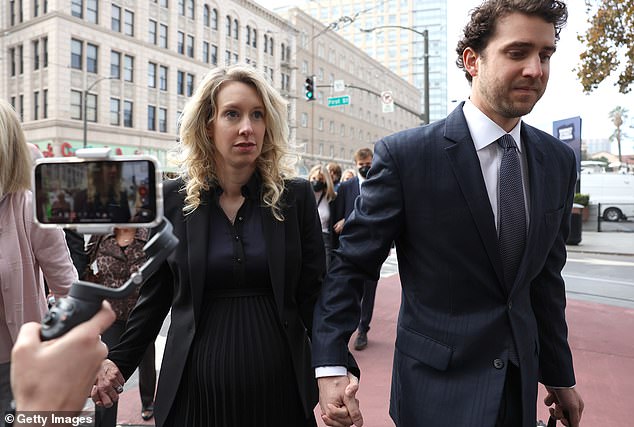 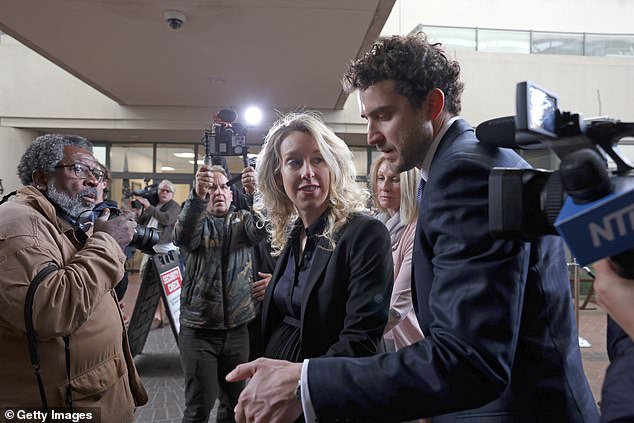 Homes, 38, defrauded investors out of $140million by claiming her Theranos blood test technology would change the world 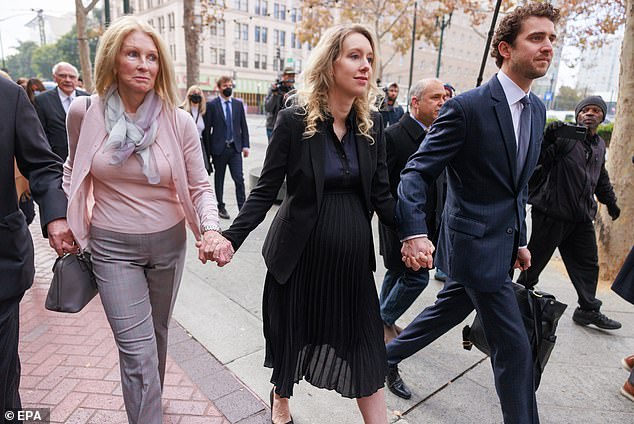 Heavily pregnant Holmes and her family remained silent as they walked into the court building, holding hands with her partner Billy Evans. She will have to self-surrender on April 27 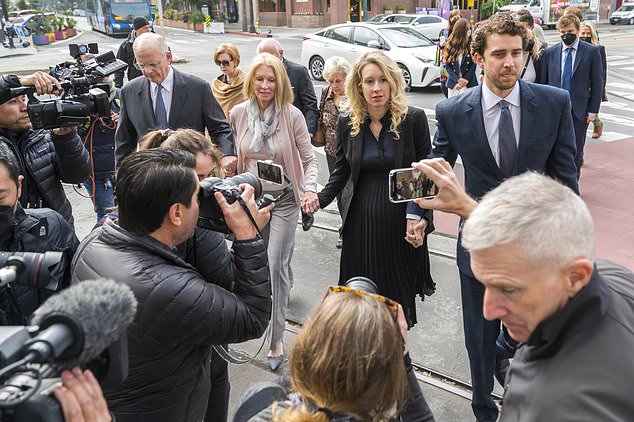 Theranos founder and CEO Elizabeth Holmes, center, walks into federal court with her partner Billy Evans, right, and her parents 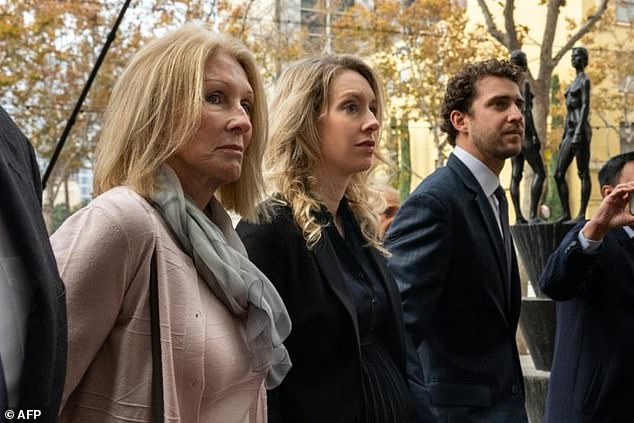 Theranos founder Elizabeth Holmes (center) was accompanied by her mother Noel Holmes and partner Billy Evans at the San Jose, California, court where she was sentenced to 11 years in prison for defrauding investors

A restitution will take place in the future.

He added that Holmes has not accepted responsibility for her actions, telling the court: ‘She maintains that she did nothing wrong’.

Alex Shultz, the son of George Shultz and father of Tyler Shultz, told the court that Tyler ‘slept with a knife under his pillow’ out of fear someone was going to ‘kill him’ because he stood up to Holmes.

He said: ‘They took advantage of my dad. He never wanted to be irrelevant. Elizabeth recognized that and targeted him.

‘Elizabeth hired a private investigator to follow my son. My son slept with a knife under his pillow thinking someone was going to come and murder him in the middle of the night.

‘There’s a lot of talk about Sunny and Elizabeth. From my family’s perspective, Elizabeth is their Sunny Balwani. She took advantage of my family.’

US attorney John Bostic told the court that while Holmes was not guilty of intending to defraud patients, that ‘does not mean she did not have a reckless disregard’ for them.

Bostic told the court that they should consider an enhancement to her sentence because she engaged in recklessness that put patients at risk of bodily harm.

He said she did so by advertising Theranos blood-testing technology to healthcare providers and patients and used the devices on patients despite knowing the results were unreliable.

The court also heard that Holmes told a Walgreens consultant: ‘They don’t put pretty people like me in jail.’ 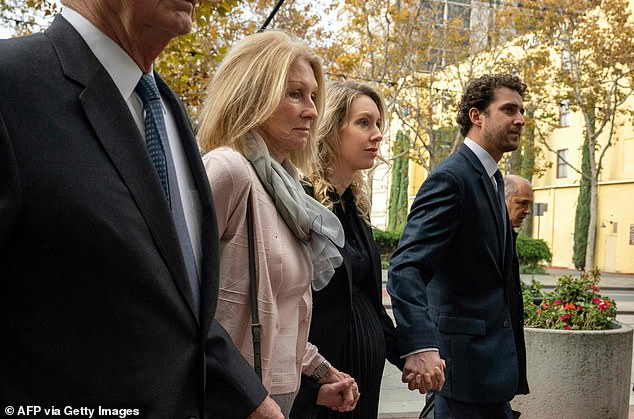 Prosecuting attorney claims Elizabeth Holmes at one point wrote: ‘They don’t put attractive people like me in jail’ 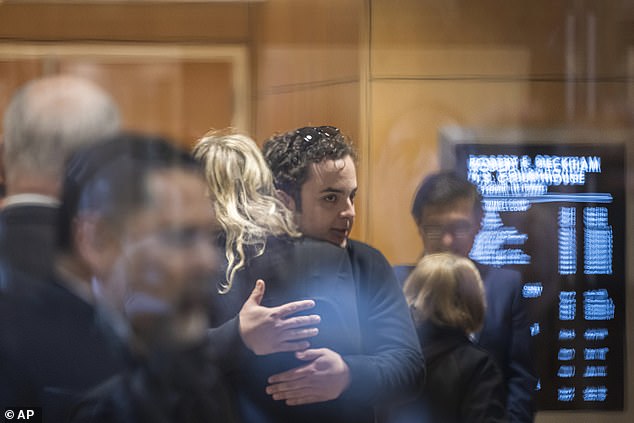 Among the 137 letters submitted to the judge was one from Evans and Senator Cory Booker, with Holmes surrounded by her team of nine lawyers in the federal courtroom.

Evans begged for mercy for his partner, citing the couple’s young son and the baby on the way.

The federal probation office had recommended a 9-year prison sentence, according to court papers.

Assistant U.S. Attorney Jeff Schenk told the judge before he handed down the sentence that a 15-year sentence would be ‘making a statement that the ends don’t justify the means.’

Her saga has been dissected in an HBO documentary and an award-winning Hulu TV series about her meteoric rise and mortifying downfall.

Prosecutors asked that she serve a three-year supervised release and pay back more than $800 million in restitution.

It is less than the maximum sentence of 20 years she could face, but her legal team asked for a sentence of no more than 18 months, preferably served in home confinement.

Her legal team say that Holmes deserves the more lenient treatment because she is now a devoted mother. 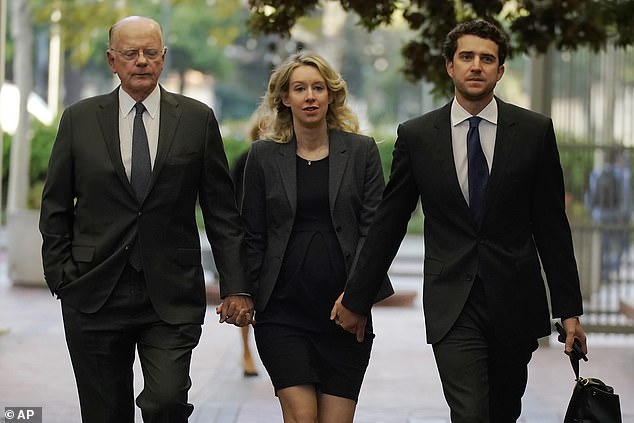 Holmes found herself in hot water after she falsely claimed that her blood tests could diagnose a multitude of health conditions with a drop of blood. Holmes, center, arrives at federal court with her father, Christian Holmes IV, left, and partner, Billy Evans, in California on October 17 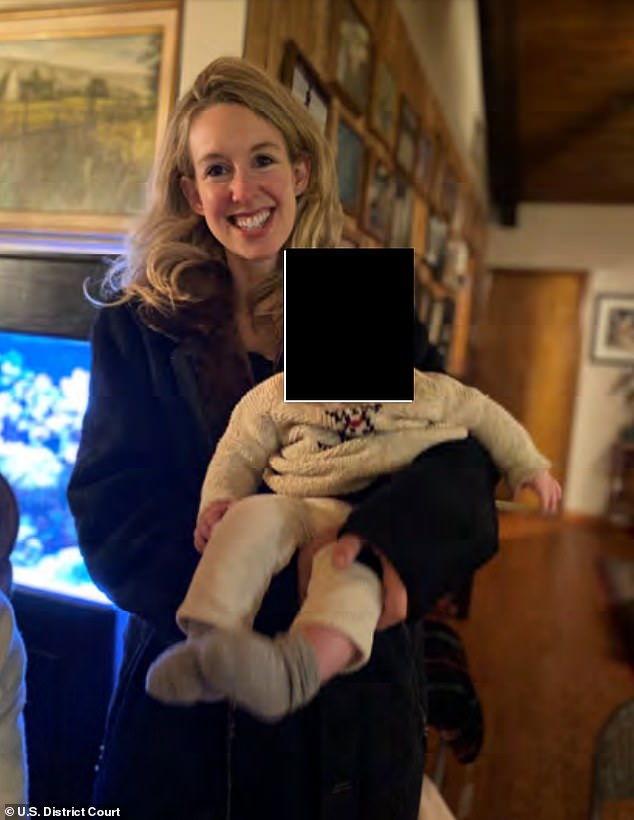 Holmes, shown with her son, is ‘terribly scared’, according to her partner. ‘It’s been a long road of hardship for her. All that being said, we have found peace in this storm. She now lives what she and I both believe to be a dream,’ he said 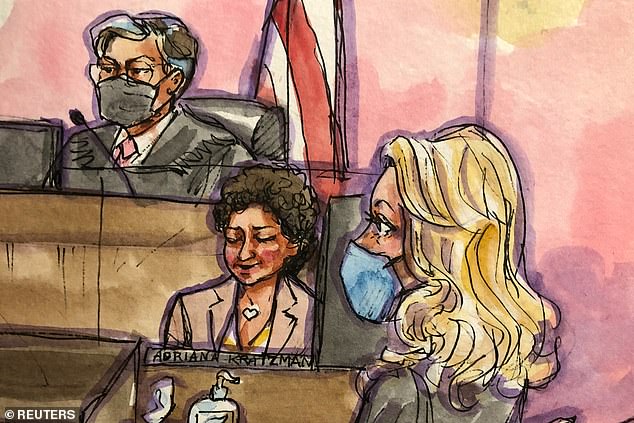 Theranos founder Elizabeth Holmes listens as the court clerk reads before Judge Edward Davila that she was found guilty on four of 11 counts in her fraud trial on January 3, 2022

While charming investors, Holmes managed to convince ex-US Defense Secretary James Mattis and two former U.S. Secretaries of State, Henry Kissinger and the late George Shultz to serve on the Theranos board.

Mattis testified against her during her trial, and Shultz’s son blasted Holmes for concocting a scheme that played Shultz ‘for the fool.’ 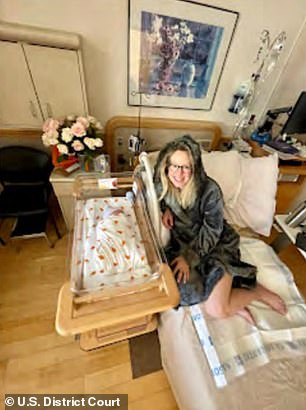 Holmes family shared personal pictures of her as a new mother in their letters to the judge, asking for mercy

Davila’s judgment – and Holmes’ reporting date for a potential stint in prison – could be affected by her second pregnancy in two years.

After giving birth to a son shortly before her trial started last year, Holmes became pregnant at some point while free on bail this year.

Although her lawyers don’t mention the pregnancy in a 82-page memo submitted to Davila last week, the pregnancy was confirmed in a letter from her current partner.

In that 12-page letter, which included pictures of Holmes doting on their 1-year-old son, Evans mentioned that Holmes participated in a Golden Gate Bridge swimming event earlier this year while pregnant.

He also noted Holmes suffered through a case of COVID-19 in August while pregnant. Evans didn’t disclose Holmes’ due date in his letter.

Federal prosecutor Robert Leach described her crimes as one of the most egregious white-collar ever committed in Silicon Valley. 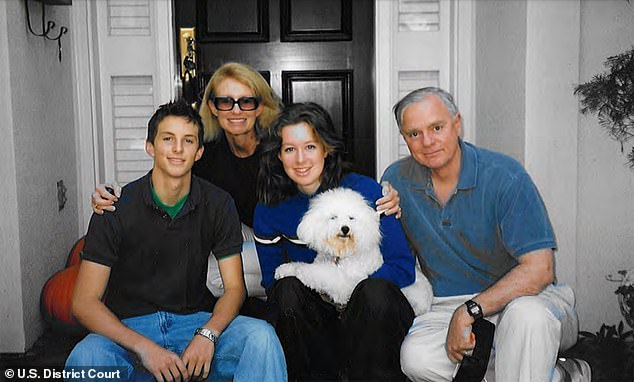 Holmes with her parents and brother. Her mother attended every day of the civil trial 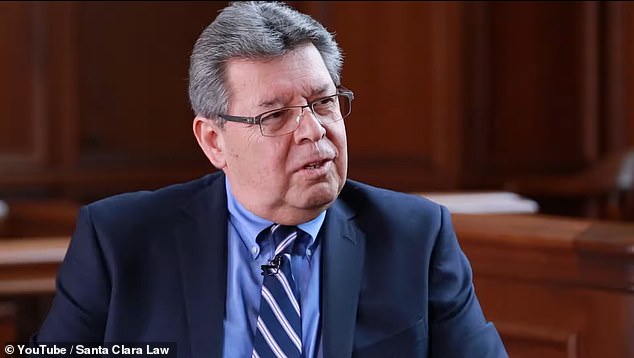 The Honorable Edward J. Davila (pictured) sentenced Holmes for her crimes on Friday

In a scathing 46-page memo, Leach told the judge he has an opportunity to send a message that curbs the hubris and hyperbole unleashed by the tech boom of the past decade.

He claims Holmes ‘preyed on hopes of her investors that a young, dynamic entrepreneur had changed healthcare,’ Leach wrote.

‘And through her deceit, she attained spectacular fame, adoration, and billions of dollars of wealth.’

Holmes was acquitted by a jury on four counts of fraud and conspiracy, linked to the patients who took Theranos blood tests.

However Leach also asked Davila to factor in the health threats posed by Holmes´ conduct.

Holmes’ lawyer Kevin Downey says that she never stopped trying to perfect the technology until Theranos collapsed in 2018.

They also pointed out that Holmes never sold any of her Theranos shares – a stake valued at $4.5 billion in 2014 when Holmes was being hailed as the next Steve Jobs on the covers of business magazines.

Defending herself against criminal charges has left Holmes with ‘substantial debt from which she is unlikely to recover.’

Downey also asked Davila to consider the alleged sexual and emotional abuse Holmes suffered while she was involved romantically with Ramesh ‘Sunny’ Balwani.

Balwani became a Theranos investor, top executive and eventually an accomplice in her crimes.

The 57-year-old is scheduled to be sentenced on December 7 after being convicted in a July trial on 12 counts of fraud and conspiracy.