As he celebrated Christmas Eve mass in St Peter’s Basilica on Monday night, Pope Francis said: “An insatiable greed marks all human history, even today, when paradoxically a few dine luxuriantly while all too many go without the daily bread needed to survive.”

The 82-year-old pope, who leads the world’s 1.3 billion Catholics, said people should seek “not material riches but love, not gluttony but charity, not ostentation but simplicity”.

In comments reported by Vatican News, he said that if people spent their lives being selfish then their heart would “remain barred to God’s light”.

He added: “Today too, the road is uphill: the heights of our selfishness need to be surmounted, and we must not lose our footing or slide into worldliness and consumerism.” 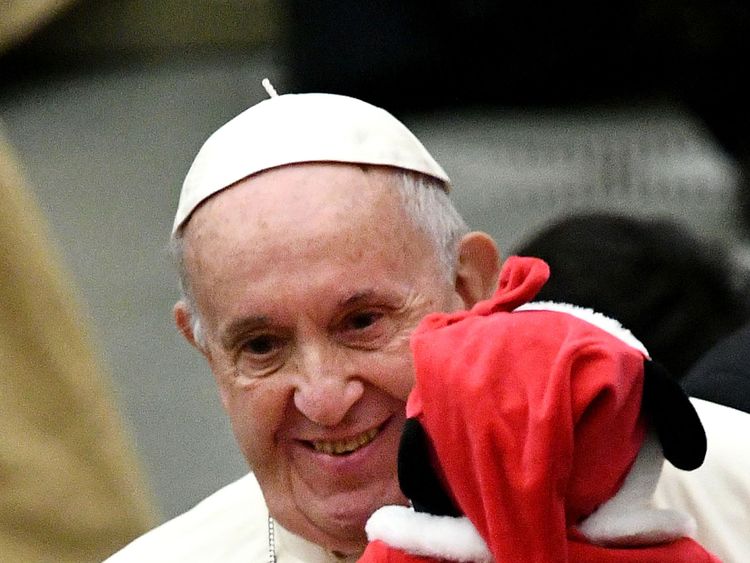 The message continues a theme of supporting the world’s poor that has been central to Pope Francis’s five years in the role.

He has previously spoken against the world’s financial system, blaming it for making the rich richer at the expense of the poor.

Last year his Christmas Eve message focused on migrants, with him urging the world not to forget the plight of millions of people driven from their homes.

The pope compared them to Mary and Joseph who, according to the Bible, travelled to Bethlehem ahead of Jesus’s birth but found no place to stay.

He said then: “So many other footsteps are hidden in the footsteps of Joseph and Mary.

“We see the tracks of millions of persons who do not choose to go away but, driven from their land, leave behind their dear ones.”

The pope’s message began what will be a busy week for him – a Christmas Day message and blessing for thousands of pilgrims expected to gather in Saint Peter’s Square, a 26 December prayer, New Year’s Eve vespers and a 1 January mass.