London: Pope Francis has condemned Russia’s “cruel and senseless” war in Ukraine and urged leaders to strive for peace as he marked what he called an “Easter of war” on Sunday.

It was the first Easter since 2019 that the public was allowed in St Peter’s Square at the Vatican, with an estimated 50,000 people gathering to listen to the 85-year-old pope’s twice-yearly address which is traditionally an overview of world conflicts. 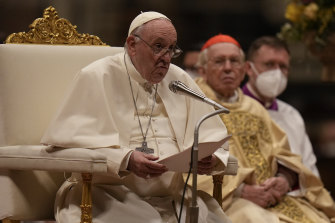 Pope Francis presides over an Easter vigil ceremony at the Vatican.Credit:Alessandra Tarantino

He dedicated much of the message to Ukraine, with the crowd waving yellow and blue flags and cheering in solidarity.

“Please, please, let us not get used to war,” Francis pleaded, after denouncing “the flexing of muscles while people are suffering”.

“Our eyes, too, are incredulous on this Easter of war. We have seen all too much blood, all too much violence. Our hearts, too, have been filled with fear and anguish, as so many of our brothers and sisters have had to lock themselves away in order to be safe from bombing.

“May there be peace for war-torn Ukraine, so sorely tried by the violence and destruction of the cruel and senseless war into which it was dragged,” he said.

While Francis has yet to publicly condemn the Russian leader by name, his denunciations of the war in Ukraine have grown stronger. Last month he said that international organisations, such as the United Nations, had proven to be useless in stopping violence and atrocities.

He again raised the spectre of the war leading to a nuclear conflict, quoting the 1955 manifesto by philosopher Bertrand Russell and physicist Albert Einstein: “Shall we put an end to the human race, or shall mankind renounce war?“

“I hold in my heart all the many Ukrainian victims, the millions of refugees and internally displaced persons, the divided families, the elderly left to themselves, the lives broken and the cities razed to the ground,” he said.

He also called for peace between Palestinians and Israelis, as well as in other countries across the globe including Yemen, a country which he described as suffering “from a conflict forgotten by all,” and the Democratic Republic of Congo, which he is due to visit in July. 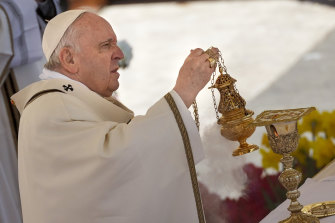 “Please, please, let us not get used to war,” Pope Francis pleaded.Credit:Alessandra Tarantino

The pope, who suffers from chronic back pain and has a knee ligament problem, appeared comfortable during the long mass that preceded the “Urbi et Orbi” address, a Latin term meaning to the city and to the world.

Earlier this month in Malta, Francis implicitly criticised Putin over the invasion, saying a “potentate” was fomenting conflict for nationalist interests.

But he has faced criticism for having so far not named Putin directly in his condemnation.

It has been reported that he is seeking to keep open a dialogue with Russian Orthodox Church leader Patriarch Kirill, a close ally of Putin, who has sought to cast the war as a “metaphysical” battle with the West and urged supporters to rally against Moscow’s “external and internal enemies.” 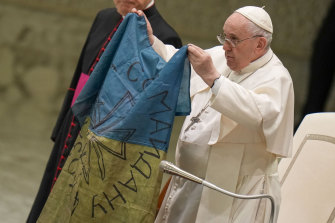 Pope Francis shows a flag that was brought to him from Bucha, Ukraine, earlier this month.Credit:Alessandra Tarantino

The pair have met once before, at Havana airport in 2016, in what was the first meeting between a pope and Russian patriarch in more than a millennium.

Earlier this month, the pope said he was working on a possible meeting with Kirill, possibly at a location in the Middle East. He also said that a papal visit to Kyiv was on the table.