Theresa May was thrown a lifeline last night after a poll showed public support for her Brexit deal has grown among both Tory and Labour voters.

The number of Conservative supporters who want MPs to back her deal has risen to 55 per cent – up eight points in five weeks. Meanwhile the proportion against it has fallen by seven points to 31 per cent, according to a survey for this newspaper.

Some 30 per cent of Labour voters also think MPs should support her deal, a similar eight point increase, with 51 per cent against. 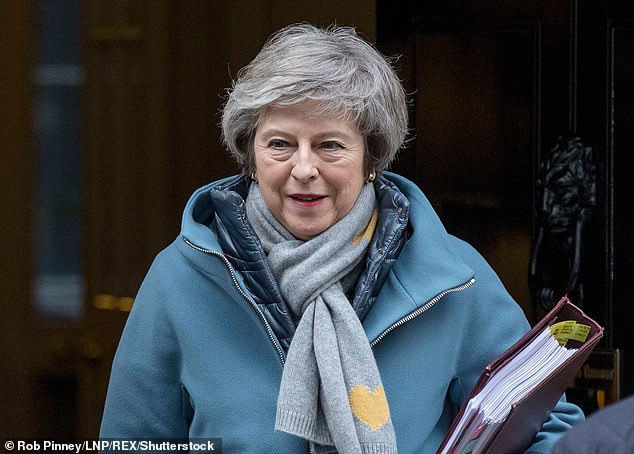 But the Survation poll is further evidence of the huge task Mrs May faces in rescuing her deal, which seems set for defeat in the Commons on Tuesday. Overall, it is still opposed by 41 per cent to 34 per cent of the public, although opposition has fallen by nine points since December.

Worryingly for Mrs May, Labour has also taken a three-point lead over the Tories with the Conservatives on 38 to Labour’s 41.

But the poll – which questioned 1,013 adults on Thursday and yesterday – shows that despite lacking enthusiasm for the Prime Minister’s deal, voters appear to prefer it to the prospect of leaving the EU with no deal at all.

Given a straight choice between Mrs May’s offer or ‘no deal’, 41 per cent support her deal, compared to 32 per cent who back ‘no deal’. Tory voters’ support for the Prime Minister contrasts with other recent surveys, which have shown Conservative Party members oppose her deal.

Even if her deal is thrown out by MPs next week, voters want her to produce an alternative ‘Plan B’ instead of leaving the EU without any agreement with Brussels, the poll found. A total of 44 per cent favour a ‘Plan B’ – seen by most as likely to offer a ‘softer’ Brexit – with 32 per cent in favour of ‘no deal’.

Mrs May was furious when rebel Conservative MPs defeated her in the Commons this week, joining forces with Labour to force her to produce a ‘Plan B’ in just three days if she loses on Tuesday. But the public backs the rebellion by 42 per cent to 35 per cent – and they also support Speaker John Bercow’s decision to allow it.

The survey offers other crumbs of comfort for Mrs May. Asked who they trust to handle Brexit, 34 per cent chose the Prime Minister, with 21 per cent for Mr Corbyn.

She defeats Boris Johnson on the question of who is ‘best to handle Brexit’ by a margin of 34 per cent to 20 per cent. In another blow to Brexit hardliners like Mr Johnson who advocate ‘no deal’, when voters were asked to choose between that and staying in the EU, ‘Remain’ won by 46 to 41 per cent.

The survey also provides fresh evidence of the deeply-conflicted views that Brexit has provoked in the public. A total of 45 per cent say Mrs May should resign if she is defeated, with 39 per cent in favour of her staying on.

But Tory voters have not given up on her. An overwhelming 66 per cent say she should carry on in No 10 if she loses on Tuesday, with only 26 per cent in favour of her stepping down.

A total of 26 per cent of the public say she is ‘bad’ for EU negotiations, with just 21 per cent stating she is ‘good’. But far more, 37 per cent, say whether she stays or goes will make little difference to Brexit.