For decades I have written critically of police who abuse their powers, cover up the misconduct and worse of fellow officers and engage in corrupt conduct. I have also been severely critical of grossly inadequate police accountability processes that for too many years failed to keep police accountable for their actions. I will not hesitate to do so again whenever the evidence warrants it.

I will also not hesitate, however, to support police when they are doing their very best to serve the Victorian community by upholding the law and keeping the peace. At the moment police are endeavouring to fulfil both these roles under extremely difficult and at times dangerous circumstances. 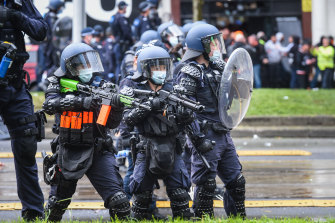 Riot police move in to control a violent protest outside the CFMEU offices on Monday.Credit:Justin McManus

Lawbreaking protesters, many with highly questionable motives, are intent on causing mayhem and drawing attention to themselves. They are doing all they can to provoke police in the hope that officers will be goaded into inappropriate, unacceptable behaviour. On a couple of occasions over recent days they may have been successful.

Unlike in the past, the incidents where this is alleged to have happened is subject to an in-depth investigation by Victoria Police’s Professional Standards Command. More importantly though, the Chief Commissioner of Police, Shane Patton, has publicly stated that the police investigation will be overseen by Victoria’s Independent Broad-Based Anti-Corruption Commission. IBAC has proven to be an effective citizens’ watchdog body and is trusted by the community to conduct a thorough oversight role.

The findings of Victoria Police and IBAC’s assessment of the quality of the police investigation must be made public.

The Age is also lodging a complaint about the treatment by police of one of its experienced photographers who was photographing the interactions between the lawbreaking demonstrators and police. Despite identifying himself as media, the photographer was sprayed by police with capsicum foam. This matter must be overseen by IBAC and police findings and IBAC’s assessment of them must be made public. 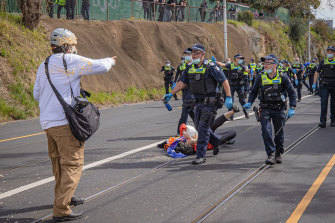 Age photographer Luis Ascui is pepper sprayed by a Victoria Police officer during the anti-lockdown protest in Richmond.Credit:Jason Edwards/Herald Sun

It is vital that both investigations are not kept secret, for even though the role of police in a liberal democratic society is to enforce the law and keep the peace, they are legally obliged to do so according to the law. In other words, police do not sit above the law while enforcing the law. This is fundamental to the concept of democratic policing, as police exercise coercive powers not available to other members of society.

Broadly speaking, police have been granted the power to legitimately stop a person, question them and, if warranted, to detain and arrest them. Police also possess the power to search a person, seize their property, fingerprint and photograph them. They can deprive a person of their liberty and use force and even violence to control a situation. Under the most extreme circumstances police can legally take a life. The need for stringent, effective accountability for the use of such powers in a liberal democratic society is manifestly obvious.

This does not mean, however, that it is part of the police role to be used as punching bags by a tiny, unrepresentative element of the community, nor is it part of their role to act as targets for those wishing to pelt them with dangerous objects and to stand quietly to attention while members of an unruly pack spit on them.

It is worth remembering, that police are sons, daughters, and in most cases mothers, fathers, brothers and sisters. How would the small band of lawbreaking protesters react if their family members were subjected to similar assaults while going about their job?

It is also worth thinking about what members of Victoria Police are feeling while preparing to go to work knowing they may well be attacked by an out-of-control mob?

Police are charged with performing multi-faceted roles, but how can they undertake them all when hundreds and sometimes thousands of officers are necessarily being deployed to protect community members and property from violent mobs’ attempts to take over the streets, and to do so in the middle of a pandemic that is taking people’s lives.

Perhaps the unlawful protesters could pause for a moment and consider the heartfelt message from Lisa Fitzpatrick, the Victorian secretary of the Australian Nursing and Midwife Federation. As she explained, “Nurses, midwives and carers are exhausted as they watch protesters fight for their right to overwhelm our health system”.

Police, like all frontline workers, are understandably feeling the many stresses associated with trying to protect Victorians from the ravages of COVID-19. In addition, police are attempting to prevent the community from being infected by the devastating consequences that accompany mob rule.

If some officers step out of line, Victoria now has the independent accountability processes required to hold them accountable for unlawful and unacceptable behaviour.

Dr Colleen Lewis is an Honorary Professor at the Australian Studies Institute, ANU. She resides in Victoria.