Passengers became so irate at being stuck on the ground for four hours at a London airport that one allegedly opened the door before another claimed he was a terrorist.

The six-and-a-half hour TUI Airways flight from Cape Verde to London Gatwick was diverted to Stansted due to disruption caused by drones over the Sussex airport.

But passengers claimed it was ‘pure hell’ on the Tarmac at Stansted overnight on flight TOM687, with some shouting at other travellers and being abusive to staff.

Having been stuck on the plane – which landed at about 10.15pm last night – for four hours, a man then allegedly opened the door and put everyone on board at risk.

Another then said he was a terrorist – and video footage showed two Essex Police officers coming on board to defuse the situation. No arrests were made.

One passenger, Lyndsey Clarke, from Southend-on-Sea, Essex, tweeted: ‘So Gatwick is shut due to drones so our flight TOM687 has been diverted to Stansted.

‘So far we’ve been stuck on our plane for four hours… a man has opened the plane door and put everyone at risk and then another guy says he’s a terrorist.

‘Living pure hell right now. The staff on flight TOM687 have been amazing but unfortunately they have been subject to so much abuse.

‘We all just want to get home. Several passengers on flight TOM687 just making this ordeal so awful, abusive to staff, shouting at other passengers. Police here now.’ 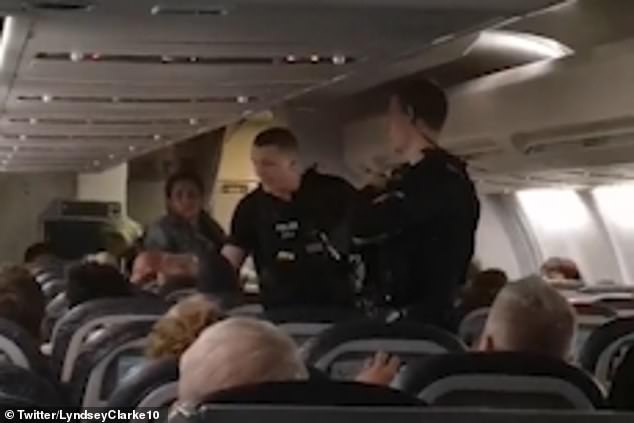 Later, she added that she finally off ‘the plane of living hell’, adding: ‘Now to find a taxi back to Gatwick with a big bill – passengers trying to go together.’

And at 5.30am, Ms Clarke tweeted a picture of her car, saying: ‘Never been so happy to see our car. Back at Gatwick finally… eight hours later than our scheduled flight was due to arrive home at 9.30pm… just over an hour’s drive home now.’

After arriving home she tweeted: ‘As for the terrorist… I have no words that someone thought it was OK to terrify an aircraft by saying he was a terrorist when in fact he was using it as an ‘idea’ to get them to let us off the plane, causing many of us to have panic attacks as we didn’t know if he was real.’

Another passenger, Ashley Pollitt, tweeted TUI to praise staff on the flight for being ‘nothing but helpful and informing us regularly’ about what was happening.

She added: ‘I’m sensing you will get a lot of complaints off idiotic customers that put both passengers/staff in danger along with other throwing stupid statements around. 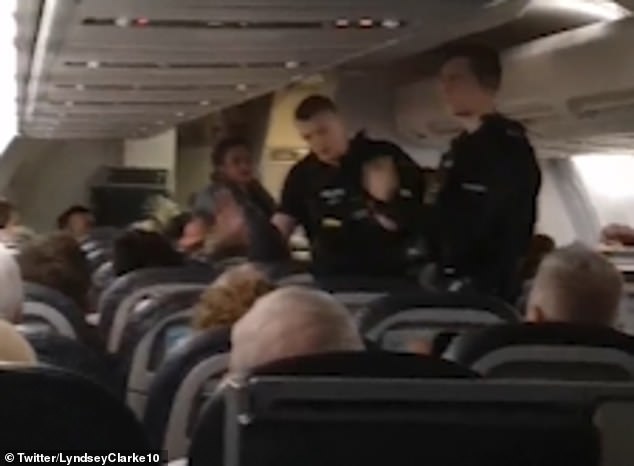 Having been stuck on the plane – which landed at about 10.15pm last night – for four hours, a man then opened the door and put everyone on board at risk

‘I just wanted to say your staff from the captain to the cabin crew were nothing but professional and informative.’

TUI replied, saying: ‘Sorry to hear that your flight has had to be diverted Ashley, I can imagine this has been an inconvenience. It’s great to read however that our staff have been helpful in keeping you informed during this time.’

It then added: ‘Thanks so much for sharing your experience with us Ashley. We’ll be sure to pass on your kind words to the crew of TOM687.’

An Essex Police spokesman told MailOnline: ‘We were called shortly after 1.35am on Thursday, December 20 to reports a passenger was being disruptive.

‘We attended and spoke to the parties involved. No offences were identified and words of advice were given to the male passenger.’ 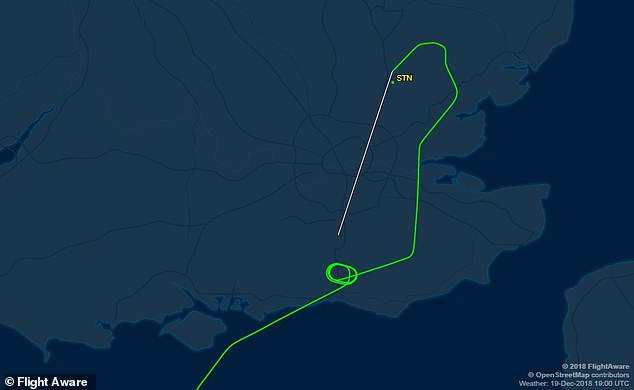 A TUI spokesman said: ‘We would like to apologise to customers travelling on TOM687 which was diverted to London Stansted due to the London Gatwick drone disruption.

‘While the aircraft was held on stand, our captain made the decision to call police to the aircraft due to a customer’s disruptive behaviour. We operate a zero tolerance policy on aggressive and abusive behaviour on board our flights.

‘The safety and security of all our customers and crew remains our number one priority and we are doing everything possible to minimise the disruption for our customers during this time.’