Police officers armed with batons have battered the cab of a drunk HGV driver’s vehicle after he led them on a 20-mile chase.

Footage of the shocking moment was shared on social media by Wiltshire Police yesterday and shows officers pummelling the vehicle after driver Andrew Champion, 54, refused to exit.

Champion had a bottle of whisky next to him when he was spotted driving between lanes at high speed with damage to his 44-tonne lorry on the M4 on May 6.

Police stopped the out of control lorry driver with a stinger trap after weaving between traffic during the potentially deadly chase.

They then surrounded the cab and when he wouldn’t come out they battered it with their batons.

A breath test reading revealed that Champion was five times over the legal limit, with 174mg of alcohol in 100ml of breath – the legal limit is 35mg. 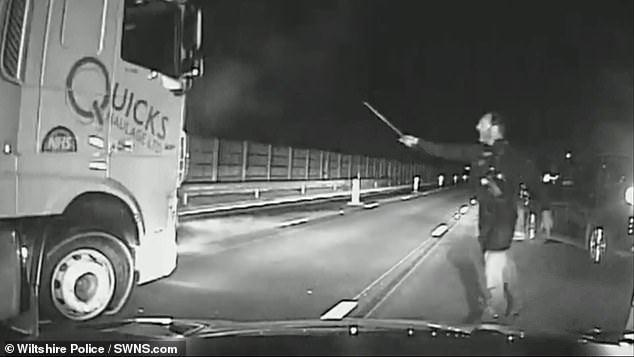 He was sentenced to 14 months in prison and banned from driving for four years and seven months.

Champion was also fined £156 and required to take another driving test when permitted to drive again.

‘He was effectively creating a rolling barrier on the motorway and slowing other members of the public down to stop them from passing and getting anywhere near the lorry,’ PC Jay Clifton who took part in the chase, said.

‘The lorry weaved from the second lane onto the hard shoulder, missing a recovery vehicle and the vehicle being recovered by a couple of feet.

‘How he didn’t hit them, I don’t know. It was terrifying.

‘I’ve been on the roads policing unit for 17 years, and I’ve never seen anything like that before.

‘I was just terrified for other people. It’s not the damage he can do to himself, which is going to happen, it’s the danger he’s giving to other members of the public.

‘Had he crossed the carriageway into oncoming vehicles, we could have been looking at fatalities, had he gone into any roadworks and hit a member of the maintenance crew, people could have died.’

Champion pleaded guilty to drink driving and dangerous driving at Newport Crown Court on 27th September, and was jailed for 14 months and banned from driving for four years and seven months.