Seconds to spare: Police officer sprints across tracks to rescue a disorientated blind woman standing in the way of an oncoming tram

This is the dramatic moment a heroic police officer sprints across the tracks to save a blind woman who was disorientated and standing in the way as a tram came towards her.

The incident took place with seconds to spare at Villarejo station in the city of Granada in the southern Spanish region of Andalusia.

In the video, a blind woman, who has not been named, can be seen standing in the middle of the tram tracks and appears to be disorientated.

She uses a cane to feel for her whereabouts but appears confused and cannot locate the platform at the edge of the tracks.

A police officer, who had seen her as he was in his patrol car, then starts running towards her.

Just as the officer reaches the tracks, a tram can be seen makings its way around a corner just a few metres from the blind woman.

The cop manages to reach the woman and leads her off the tracks just before the tram reaches them. 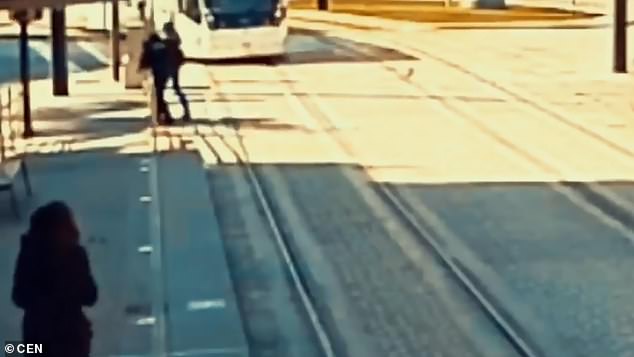 The Spanish National Organisation for the Blind shared the video and thanked the police for their actions.

Local police also shared the video and said: ‘Even though not all heroes wear capes, in this case, the man who runs, wears the uniform of the local police of Granada.

The video has so far been viewed more than 73,000 times with many praising the incredible actions of the officer.

Local media report the blind woman was not injured in the incident.

May 26, 2020, Comments Off on James Argent’s weight loss: TOWIE star’s body transformation over the years as he shows off slimmed-down figure

May 26, 2020, Comments Off on Vikings blunder: Fans uncover glaring Torvi continuity error in key Lagertha scene
We and our partners use cookies on this site to improve our service, perform analytics, personalize advertising, measure advertising performance, and remember website preferences.Ok