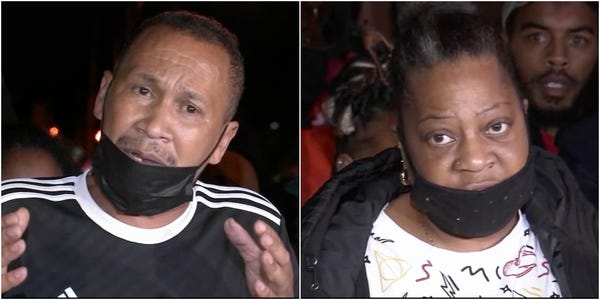 The 27-year-old Black man who was shot and killed by two police officers in Philadelphia on Monday was having a mental-health crisis, and officers were aware of that, his parents have told reporters.

Two officers fired more than a dozen shots at Walter Wallace Jr. on Monday afternoon as he walked toward them while holding a knife, and ignored repeated requests to put the weapon down, the police said. Wallace later died in the hospital.

Bystander video showed Wallace's mother trying to defuse the situation in the moments before the shooting.

"I was telling the police to stop, don't shoot my son. They paid me no mind and they just shot him," Cathy Wallace told reporters at her home Tuesday night, according to Fox 29.

"I can't even sleep at night, every time I close my eyes I got flashbacks of multiple shots," Wallace Sr. said Tuesday night, according to WPVI.

At the news conference, Wallace's mother said that police were aware of her son's mental-health crisis, and that officers had been called to the house three times earlier on the day he was killed.

During one of the visits, the officers "stood there and laughed at us," according to the Associated Press.

On the final 911 call, Wallace's brother requested an ambulance, but the police were sent to the scene instead, the family's attorney, Shaka Johnson, said at the news conference, according to CBS Philly.

"I find it extremely emotionally taxing to think about how you can call for assistance and wind with the people who you called end up killing you," Johnson said, according to Fox 29. "I can't even conceive the concept."

It's not clear if the two police officers who shot Wallace were among those who visited his house earlier in the day.

Johnson added that doctor had been helping Wallace with his mental illness, and that he was taking the mood stabilizer lithium, CBS Philly reports.

On Monday, Wallace's father had wondered in an interview with the Philadelphia Inquirer why officers had not instead used a Taser on his son.

At a Tuesday news conference, Philadelphia Police Commissioner Danielle Outlaw said neither officer had a Taser or similar device on them at the time of the shooting, adding that the department had previously tried to get funding to give more officers these kinds of tools, the AP reported.

According to the AP, police officials could not confirm what kind of information had been given to the officers who were dispatched to Wallace's home during the fatal incident, including whether they were told he had a mental illness.

They also could not confirm how many calls they received from that address on Monday.

Wallace has had several run-ins with police over the years, according to a criminal record obtained by NBC Philadelphia. Most recently, in March, he was arrested after allegedly calling the mother of his child and threatening: "I'll shoot you and that house up."

NBC Philadelphia also found records of arrests in 2019, 2016, and 2013, for issues ranging from allegedly holding a gun to a woman's head during a robbery, and violating a protection order his mother had on him by allegedly punching her and threatening to shoot her.

Wallace was the father of nine children, and three of his sons appeared briefly at the Tuesday news conference, Fox 29 reported.

The family told NBC Philadelphia that Wallace had gotten married earlier this month. His wife, Dominique, was pregnant and due to be induced into labor on Wednesday, according to the AP.

On Tuesday night, hundreds of people took part in a peaceful march through West Philadelphia to a local police precinct. Later, there were reports of a few clashes between police and looting in East Philadelphia, according to the AP.

Thirty police officers have also been injured — including a female officer who was run over by a pick-up truck and remains hospitalized for a broken leg.

The two officers who shot Wallace have been taken off street duty. Outlaw said Tuesday that her office is conducting a risk assessment to see if it's possible to release their names.