Ethiopia: Conflict in Ethiopia's Tigray region is still rife despite Prime Minister Abiy Ahmed's assertions that government troops had ceased military operations in the dissident province after capturing its capital on Saturday, according to the region's president.

Debretsion Gebremichael, the leader of the Tigray People's Liberation Front, said on Sunday (Monday AEDT), that his forces had regained control of Axum, a city the federal army took a week ago. They also shot down a MiG-23 aircraft and had its pilot in custody, he said by text message. 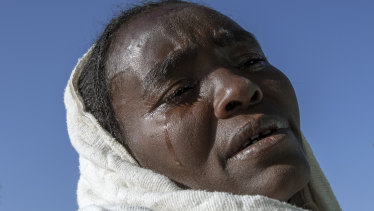 A Tigrayan woman who fled the conflict in Ethiopia’s Tigray region, weeps after Sunday Mass ends at a church, near Umm Rakouba refugee camp in Qadarif, eastern Sudan.Credit:AP

"The Prime Minister said yesterday their mission is complete, but he was caught today bombing Tigray," Debretsion said. "We'll take back all towns based on our plan. The initiative is ours now."

The federal troops began an incursion into Tigray on November 4 after Abiy, a Nobel Peace laureate, accused the TPLF of attacking an army base to steal weapons. While he reiterated that the assault would be quick, analysts warn a long and brutal guerilla war with the heavily armed Tigrayan forces is more likely. The violence in Africa's second-biggest nation has spilled beyond its borders with TPLF forces said to have fired missiles into neighbouring Eritrea three times this month.

The TPLF was once the predominant power in Ethiopia's ruling coalition but has been progressively sidelined since Abiy took office in 2018.