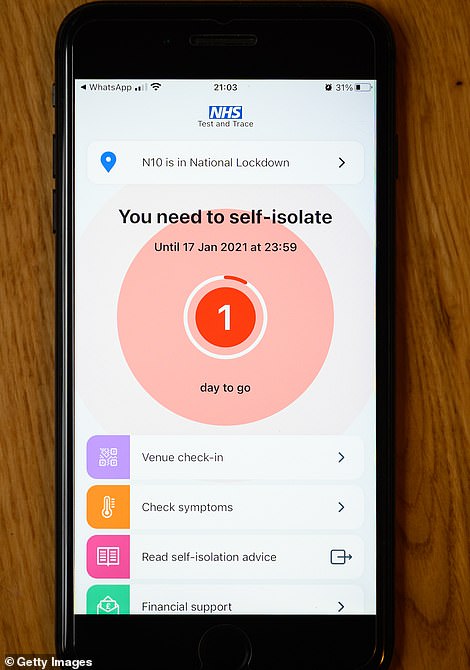 A fifth of Britons are planning to delete the NHS app before ‘Freedom Day’ amid fears that the software could spark a ‘pingdemic’ — forcing millions of people off work, creating food shortages and leaving rubbish piled up in the streets.

More than 356,000 people were alerted by the app in the last week of June, figures show, and there are fears this could spiral over the coming months amid mounting cases.

Polling suggests more than a third of 18 to 24-year-olds in the UK have already deleted the app, with another third saying they were considering wiping it from their phones within the next week.

Among adults of all ages, the proportion debating deleting the app in the next six days was 20 per cent, according to a poll by Savanta ComRes.

Self-isolation rules aren’t due to be relaxed for fully jabbed Britons until mid-August, which has led to fears many will delete the app in case a surge in cases post Freedom Day means they get ‘pinged’ and have to quarantine.

Business leaders have warned that the app could lead to a summer of chaos after Monday, when most remaining Covid curbs are due to be lifted, with supermarket shelves left empty because truck drivers are having to isolate.

And councils have raised concerns over bin collections after Leeds, Bristol and Rochdale were forced to leave resident’s rubbish on the curbside after the app forced workers to stay at home.

There are reports that up to one in five workers in pubs, restaurants and bars were also self-isolating due to the app. Separate figures showed 830,000 children were also off school as a result of themselves or a family member getting ‘pinged’.

Boris Johnson and several Cabinet ministers have begged Britons not to delete the app, warning that it provided a layer of protection against the virus when restrictions are lifted.

Everyone who gets alerted is advised to self-isolate for ten days, even if a person has been given both doses of the vaccine or can prove a negative test. Britain yesterday recorded 36,660 new Covid cases, up 27 per cent on last Tuesday. Ministers warn the country could hit 100,000 daily cases before the end of August. 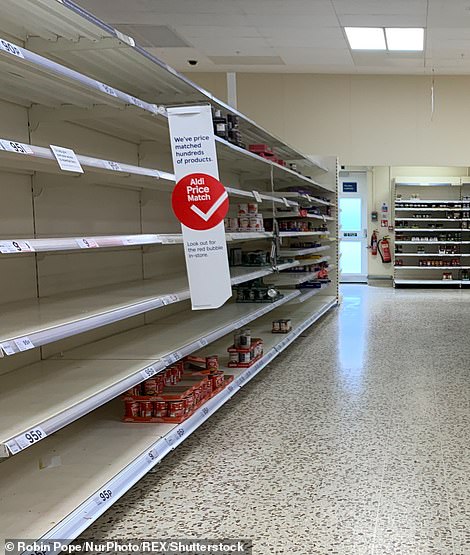 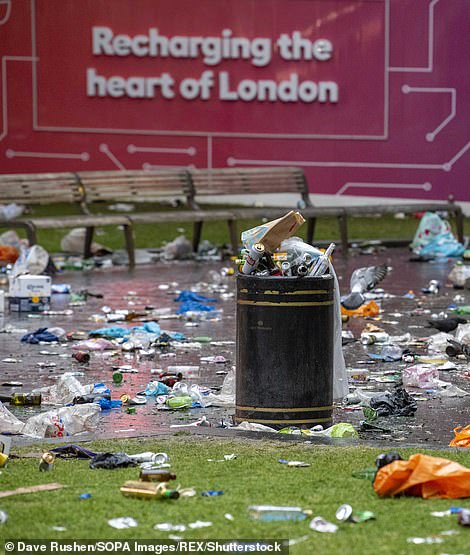 There are mounting warnings supermarket shelves could be left empty by the app, and bins could also be left to rot in the street because there are not enough staff available to self-isolate 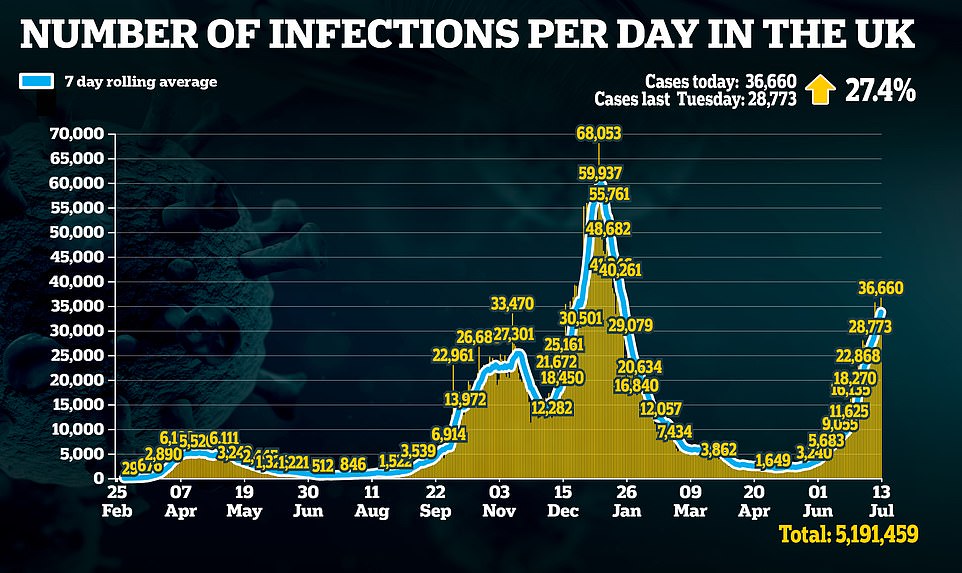 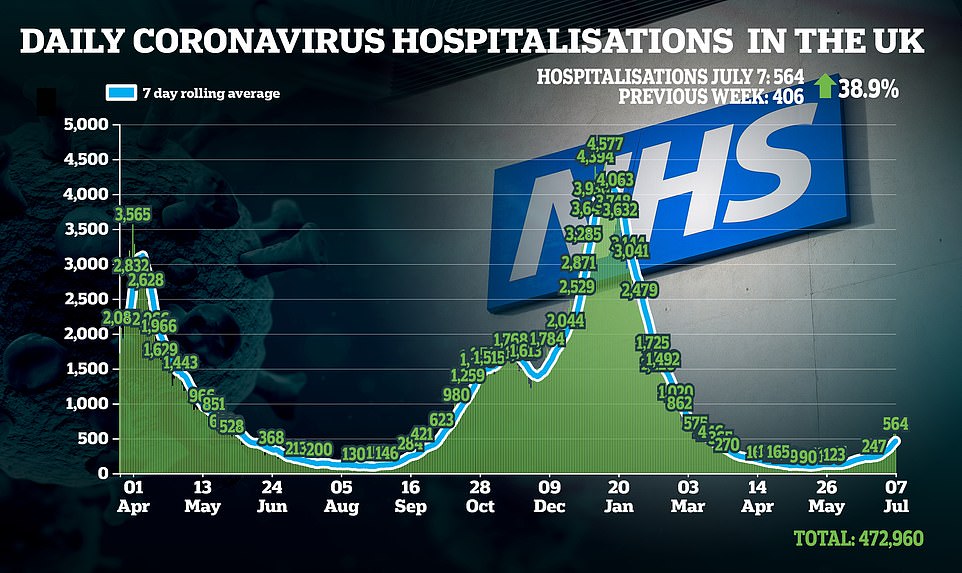 Britons are choosing to delete the NHS app instead of facing the prospect of self-isolating for ten days after restrictions are lifted on July 19, according to a poll by agency Savanta ComRes revealed in the Guardian.

Professor Henry Potts, a health data scientist at University College London, told the publication that people deleting and deactivating the app would ‘reduce the potential efficacy’.

Covid-related pupil absence in England has hit a new record high since all students fully returned to class in March this year, with more than 830,000 children out of school last week, Government figures show.

About one in nine (11.2 per cent) state school pupils did not attend class for Covid-19 related reasons on July 8, up from 8.5 per cent on July 1 and 5.1 per cent on June 24, according to Department for Education (DfE) statistics.

These include approximately 747,000 children self-isolating due to a possible contact with a Covid-19 case, 35,000 pupils with a suspected case of coronavirus and 39,000 with a confirmed case of Covid-19.

The latest figures come after Education Secretary Gavin Williamson announced last week that the use of ‘bubbles’ in schools and colleges in England will come to an end as the country moves towards easing lockdown restrictions.

Current rules say that children have to self-isolate for 10 days if another pupil in their bubble – which can be an entire year group at secondary school – tests positive for coronavirus.

But Mr Williamson has said it will be up to individual schools and colleges as to whether they scrap the bubble system on Monday ahead of the summer holidays, following the move to Step 4 of the road map.

Education union leaders have criticised the Government for simply ‘hoping for the best’ for the autumn term, as they warned that Covid-19 case numbers could get worse in schools and colleges without action.

‘We know that the number of people downloading the NHS Covid app was never as high as desired and that some people who downloaded it have already deleted it,’ he said.

‘Anecdotally, many people turn it off or do not use it as directed. This all reduces the potential efficacy of the app.’

He predicted more people would delete it in the future, saying: ‘What will happen is that the more they see Covid as less of an issue, then the more likely they will be to stop using the app.’

NHS Covid app was launched as a flagship device to help prevent the spread of the virus.

It has been downloaded more than 26million times since it was launched — or by almost half of adults in the country.

But people are deleting it in droves as retailers predict the device could spark gaps on shelves because staff, particularly delivery drivers, will have been ordered to stay at home.

Helen Dickinson, chief executive of the British Retail Consortium, said: ‘We are already seeing a serious impact on retail operations as a result of staff having to self-isolate and this will only get worse right across the economy, as cases are already rising fast and the final restrictions are eased.’

James Bielby, the chief executive of the Federation of Wholesale Distributors, said: ‘Wholesalers are seeing huge gaps in capacity as drivers and depot workers are forced to isolate. One notification can wipe out entire teams.

‘Forcing people to stay off work when they are vaccinated and free of Covid will only exacerbate that at a time when the reopening of the economy means food distributors are needed more than ever.’

There are also mounting concerns that bin collections could be disrupted by the NHS Covid app.

Residents in Leeds area already facing having their bins left on the curbside because of staff shortages.

The local council said last week that while it would continue to collect black bins — for general waste — and green bins — for recycling — as a priority, it was likely to be forced to leave behind brown garden waste bins.

In a statement, they said: ‘There has been a significant rise recently in the infection rate in Leeds. This, together with the continued requirements for staff to isolate and our Covid secure working practices, has led to an additional and significant impact on the refuse service.’

Residents in rural parts of Rochdale, Greater Manchester, are also being forced to wait longer for bin collections due to self-isolation requirements, while in Bristol they have stopped collecting garden waste because 28 workers — or one in ten — are having to stay home.

Tory council leader Mark Weston told the local newspaper: ‘All the bins had been filled and they will now sit there across the entirety of the summer, garden waste just rotting in our bins.’ 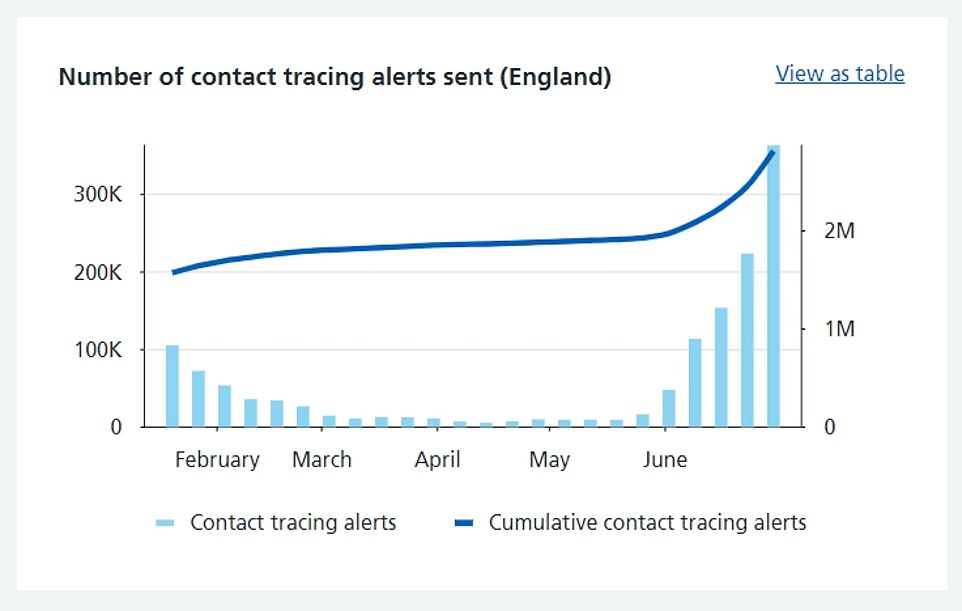 The number of contact tracing alerts has been spiking as the Delta variant fuels an increase in cases, figures show 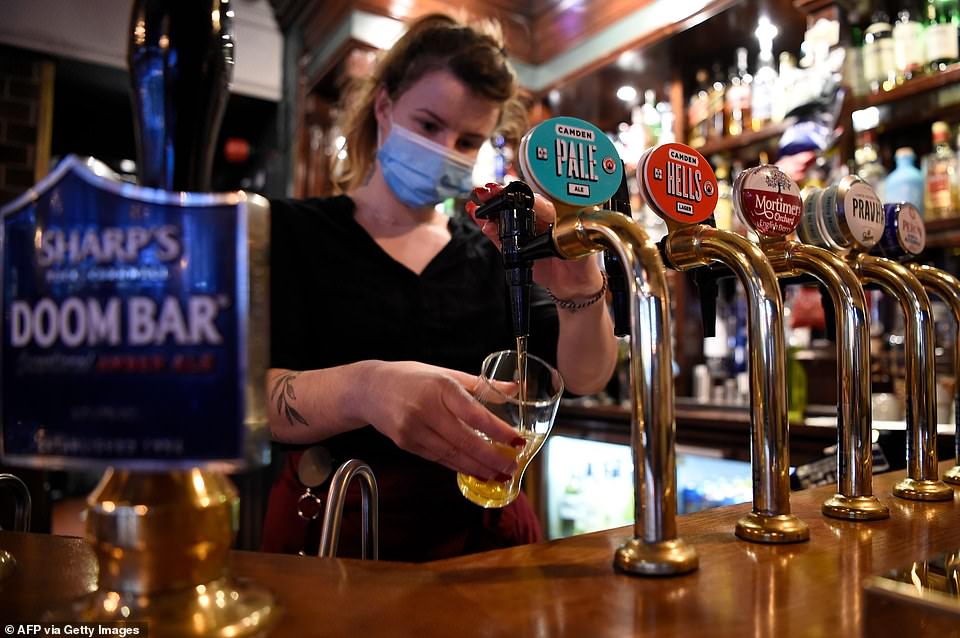 One in five hospitality and retail workers are self-isolating as surging cases spark a ‘pingdemic’, hospitality bosses say (stock)

It comes after retail bosses warned of disruption to pubs bars and restaurants when giving evidence to the Commons Business Committee yesterday.

They pointed out that most of their workers are too young to benefit from a potential exemption for the double-jabbed due to take effect next month.

Kate Nicholls, chief executive of trade group UK Hospitality warned that hospitality firms have around a tenth of jobs currently unfilled, with some workers switching to other careers during the enforced closure of large parts of the sector.

She said: ‘We are short of 200,000 workers and actively trying to recruit for those.

‘You have a hot and tighter labour market than might have been anticipated.’

Health Secretary Sajid Javid previously announced that from August 16 fully-vaccinated individuals should be let off the quarantine requirement.

Those aged under 18 are also set to benefit from the change from the same date.

Fellow minister Nadhim Zahawi said at the weekend that the government is also considering replacing the isolation rule with daily testing more widely.

Officials are working on making the NHS app less sensitive so that fewer people are caught by the isolation order.

But after Mr Johnson struck a far more cautious tone at a Downing Street press conference this week, the guidance suggested that the exemptions are not a definite commitment.

‘The Government intends to exempt people who have been fully vaccinated from the requirement to self-isolate if they are a contact of a positive case, with a similar exemption for under 18s.

‘Anyone who tests positive will still need to self-isolate regardless of their vaccination status. Further details will be published in due course and the changes are likely to come into effect later in the summer.’

The documents also insisted Test & Trace will stay in place for many months to come.

‘Test, Trace and Isolate has an important ongoing role in managing the virus and reduces the risk of potentially dangerous variants spreading,’ the guidance said.

‘The Government expects the Test, Trace and Isolate system will remain necessary through the autumn and winter.’