Photos from a mid-air plane collision over Colorado on Wednesday morning demonstrate how miraculous it was that nobody was injured in the crash that left a gaping hole in one of the aircrafts after its roof was torn off.

The collision capped off a strange week in aviation, which included an incident of a door being blown off a plane in Michigan.

South Metro Fire Rescue says the collision happened at 10:25am, when the aircrafts were just four miles north of Centennial Airport.

Somehow, nobody was injured or killed in the crash. 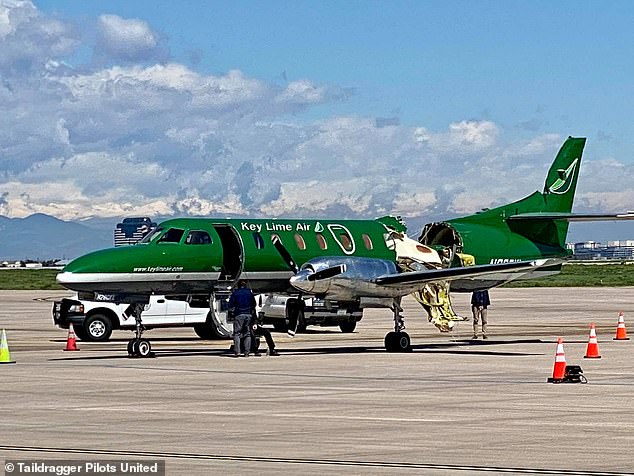 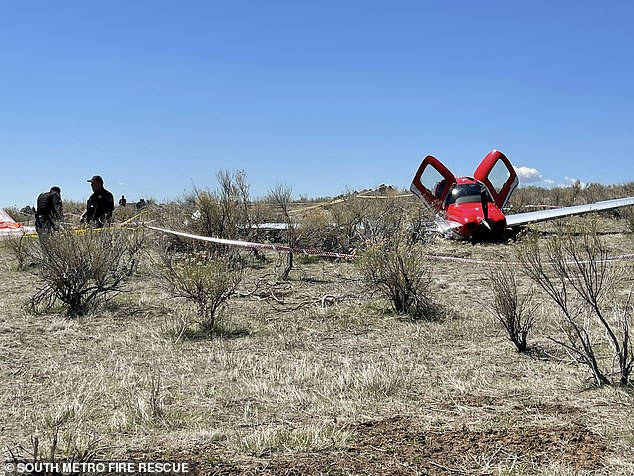 The cargo plane collided with a single-engine plane, which crash-landed in a field 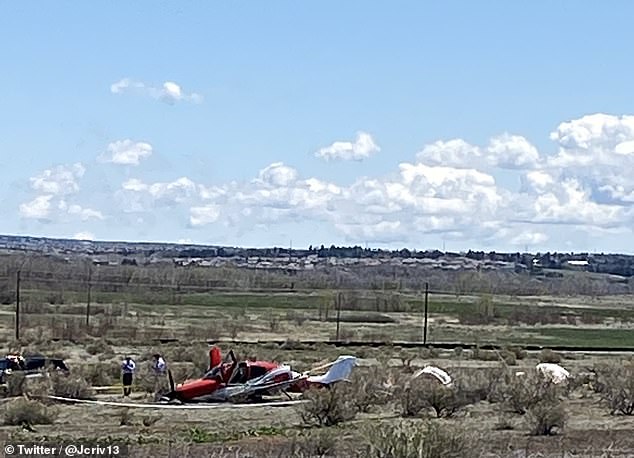 Despite the clear damage, nobody was injured in either of the planes or on the ground

A single-engine Cirrus SR22 owned by Independence Aviation crash-landed south of the Cherry Creek Reservoir after the collision.

The parachute of the plane was deployed, which helped bring it down, according to the Arapahoe County Sheriff’s Office.

Both people on the plane managed to walk away without any injuries, though Bartmann said the plane was ‘significantly damaged.’

The second plane, a Swearingen Metroliner SA226TC cargo plane that was being operated by Key Lime Air, managed to land at Centennial Airport.

Only the pilot was on board for that plane and they too walked away without any injuries.

The roof of the cargo plane was torn off, with its body fully exposed before the tail 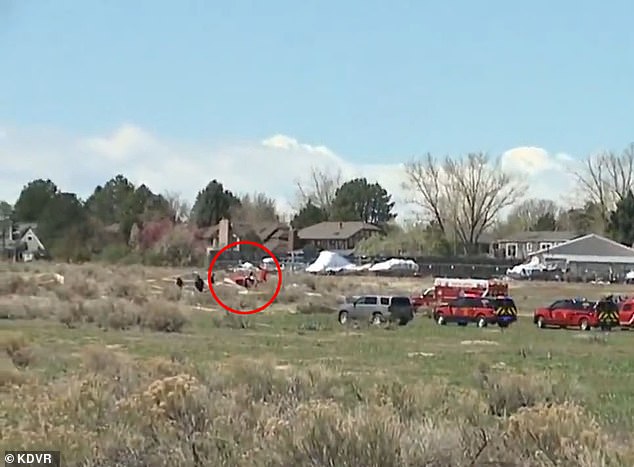 ‘We’ve had several plane crashes in our jurisdiction. Never have we seen a parachute be deployed and bring the plane down safely,’ Bartmann added to KKTV.

There was a huge hole seen in the cabin of the cargo plane, right before the tail of the aircraft, after it landed.

Air traffic control chatter suggested that there may have been a problem with the Cirrus SR22 prior to the crash.

That was followed by, ‘Cirrus 6 Delta Juliet if you hear this transmission we have emergency vehicles in your direction.’ 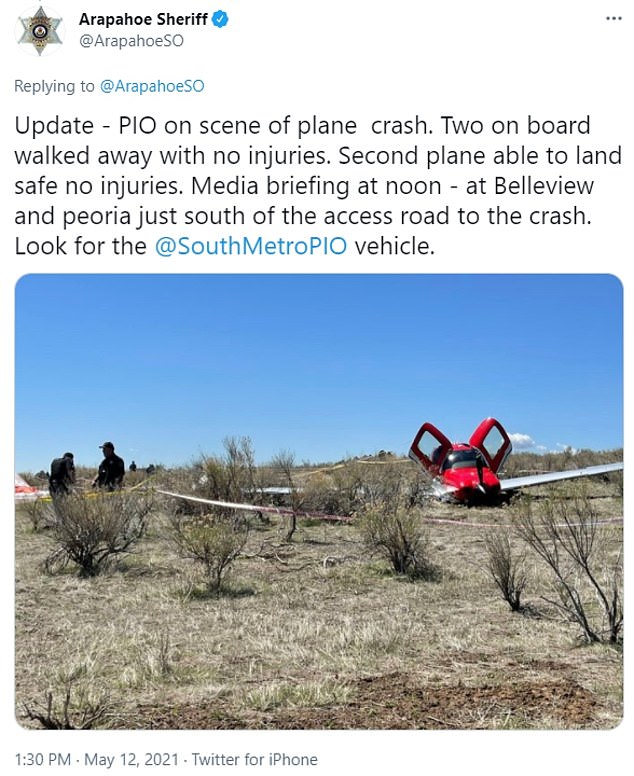 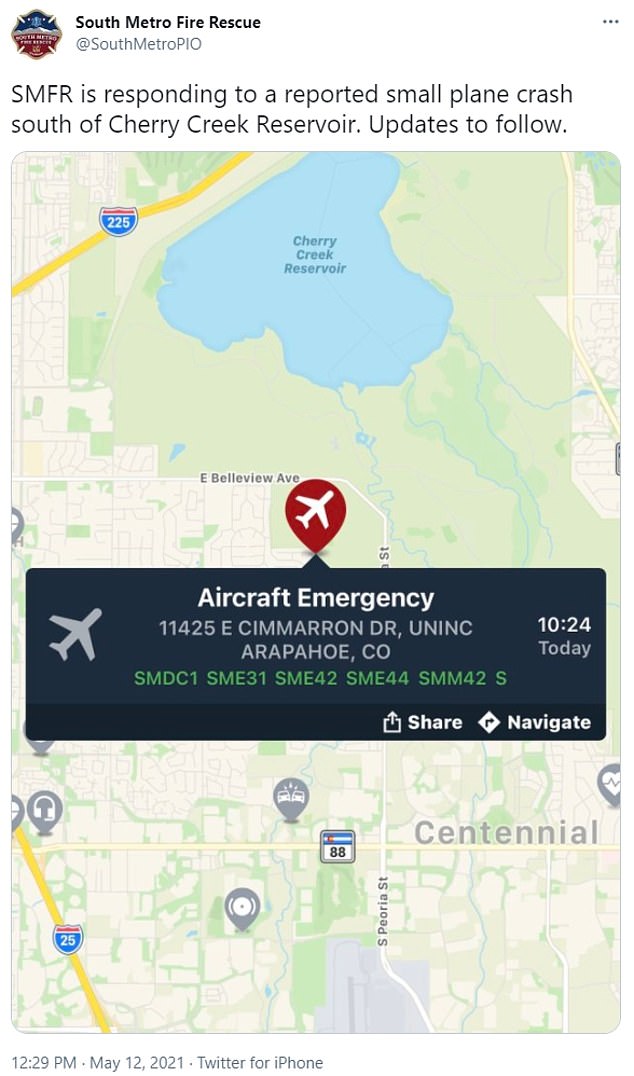 The communication was given on different frequencies.

The Cirrus pilots were warned about the Metroliner nearby, but it’s not clear what ultimately caused the crash.

FlightAware data shows the Metroliner was flying from Salida, while the Cirrus took off from Centennial Airport and was on its way back after flying up to Fort Collins.

The pilot for the Metroliner may not have even realized the crash occurred, saying, ‘Looks like the right engine failed so I’m going to continue my landing.’ 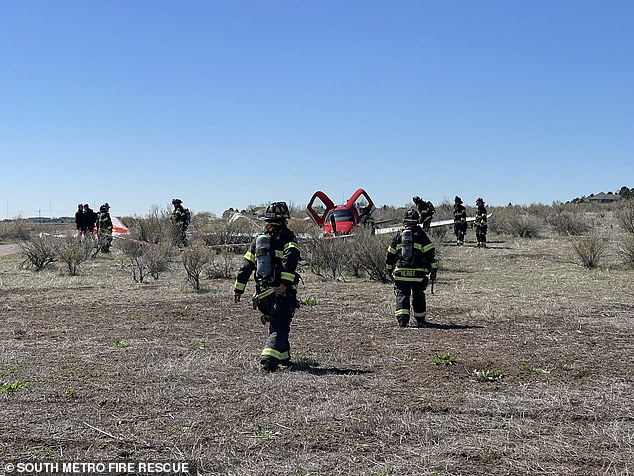 The parachute of this plane was deployed, which helped bring it down safely

Nobody on the ground was injured either, although debris from the crash can likely be found in the state park.

CBS4 obtained a statement from the FAA, which is investigating the crash.

They wouldn’t say more about the condition of the three people.

‘We have no reports of people on the ground being injured. The FAA and National Transportation Safety Board will investigate. Neither agency identifies people involved in aircraft accidents,’ the statement concludes.

The NTSB also tweeted that they were on their way to the scene, with initial reports suggesting the planes collided during landing procedures.

Key Lime Air released a statement to The Denver Channel, pledging to participate in the investigation into the crash.

‘We are participating in an active investigation of the incident with the FAA and NTSB. As information comes to light, if authorities deem it appropriate to share with the public, we will do so,’ the company said in the statement.

‘We cannot express the gratitude we have, company-wide that no one was injured. We thank all those who have reached out with concern for our company and its people.’

The mid-air collision comes exactly a week after another harrowing incident in aviation. 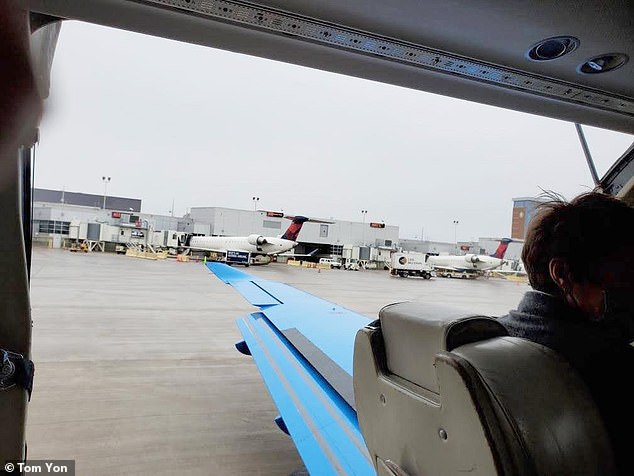 Last week, an emergency exit door flew away before a flight from Minneapolis to Michigan 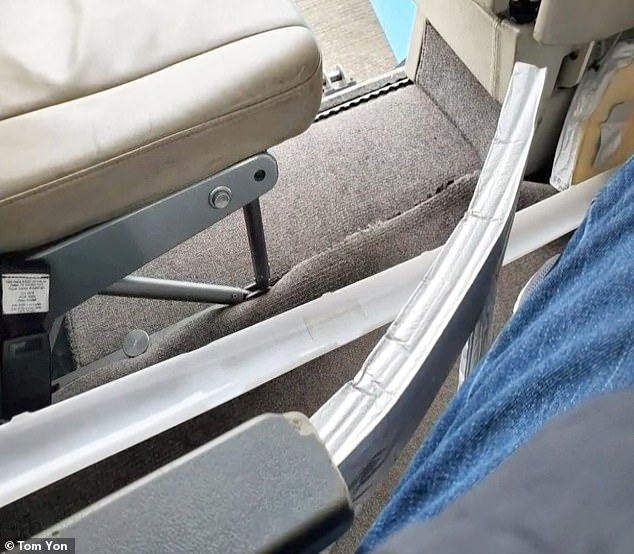 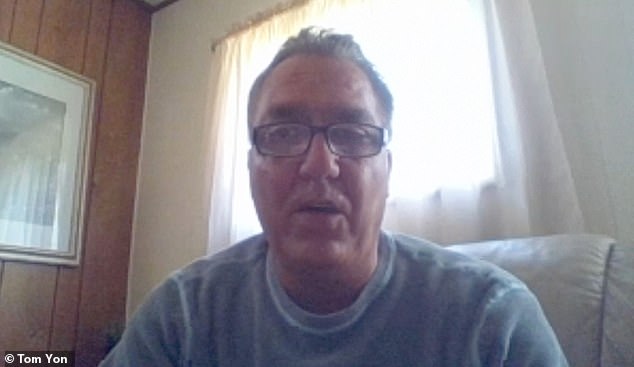 ‘We were just about to take off, probably going I don’t know 100 miles per hour and the door just flew off,’ passenger Tom Yon told a local news outlet 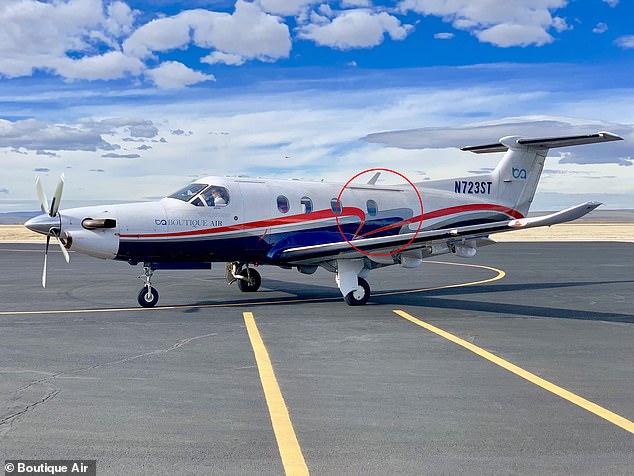 Pictured: A diagram showing where the emergency exit door was supposed to be located

Last week, an emergency exit door flew off a plane prior to a flight from Minneapolis to Ironwood, Michigan.

‘We were just about to take off, probably going I don’t know 100 miles per hour and the door just flew off,’ passenger Tom Yon told KBJR 6.

‘There was a loud bang and the door flew off and the noise and the wind and everything.’

Yon temporarily lost his carry-on bag out the plane, which returned to the gate instead of taking off.

Nobody appeared to be injured in that incident.

The two pilots who were staffing the Boutique Airlines plane have since been fired.

They failed to finish a pre-flight checklist, causing the door to open moments before take-off, according to KBJR 6.