Biden tries to fix a gaffe with another gaffe: Pentagon walks back President’s claim the US is training Ukrainian soldiers in Poland after President seemed to let slip during baffling Monday briefing

‘I do not believe we are in the process of currently training military forces from Ukraine in Poland,’ General Tod Wolters told the Senate Armed Services Committee during a Tuesday hearing.

Wolters, the Commander of the U.S. European Command and North Atlantic Treaty Organization’s (NATO) Supreme Allied Commander Europe continued: ‘There are liaisons that are there. They’re being given advice.’

‘And that’s different than I think [what] you’re referring to with respect to training,’ Wolters said during questioning from Republican Senator Tom Cotton of Arkansas.

During a press briefing proposing his Fiscal Year 2023 plan, Biden issued yet another gaffe when trying to recover from comments calling for Putin’s ouster, which the White House quickly walked back on.

She said there are ‘frequent interactions’ between U.S. and Ukrainian forces.

She also said when asked about Biden referencing a note card with questions and answers during his briefing on Monday: ‘Only President Biden decides what President Biden is going to say.’

In the midst of that backpedal, the president said that he never suggested U.S. troops would go to Ukraine, instead claiming they would help train Ukrainian forces in Poland.

This was the first time Biden revealed publicly that there was any sort of involvement with U.S. forces training Ukrainian troops for battle.

But the White House and Pentagon officials have claimed and continue to claim that this statement is false.

‘I was talking to the troops – we were talking about helping train the troops in – that are – the Ukrainian troops that are in Poland. That’s what the (sic) context,’ Biden said.

‘I sat there with those guys for a couple hours. That’s what we talked about,’ Biden said regarding comments he made to the 82nd Airborne Division on his trip to Europe on March 25.

On Friday Biden told U.S. troops in Poland that they would see the courage of Ukrainians ‘when you’re there’ – prompting a White House official to make clear to reporters that he was not suggesting Americans were about to be deployed to the war-torn country.

‘I was referring to with (sic) – being with and talking with the Ukrainian troops who are in Poland,’ he said. 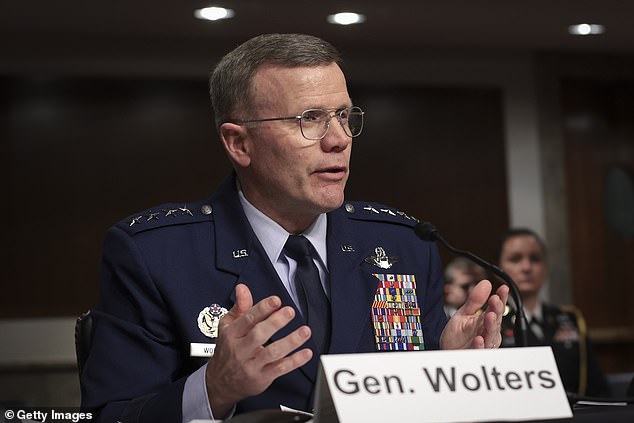 General Tod Wolters, Commander of the U.S. European Command and NATO’s Supreme Allied Commander Europe, told the Senate Armed Services Committee on Tuesday: ‘I do not believe we are in the process of currently training military forces from Ukraine in Poland’ 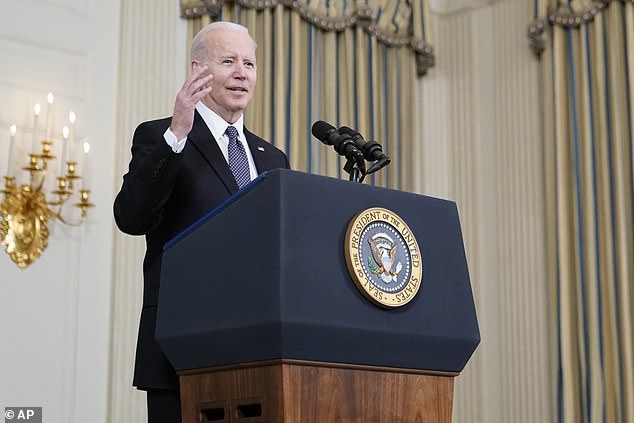 It contradicts President Joe Biden’s walk back on Monday afternoon claiming that U.S. forces are training Ukrainian troops in Poland as he tried to backtrack his other comment saying Vladimir Putin ‘cannot remain in power’

‘Are you worried that other leaders in the world are going to start to doubt that America is back if some of these big things that you say on the world stage keep getting walked back?’ he asked.

‘What’s getting walked back?’ Biden asked.

‘None of the three occurred,’ the president insisted. ‘You interpret the language that way.

Regarding the president’s Monday walk back, the White House said in a statement to Politico: ‘There are Ukrainian soldiers in Poland interacting on a regular basis with U.S. troops, and that’s what the president was referring to.’

Biden has faced widespread criticism for his public and frequent ‘gaffes’ during briefings, interviews and press conferences – specifically those instances involving Ukraine and, most recently, when Biden said Putin ‘cannot remain in power’. 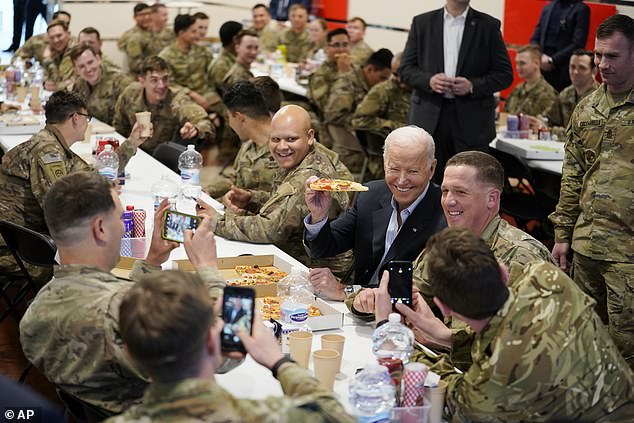 Biden met with troops in with the 82nd Airborne Division at the G2A Arena on Friday, March 25, 2022, in Jasionka, Poland. He told them that they would see the courage of Ukrainians ‘when you’re there’ – causing speculation that they were going into Ukraine 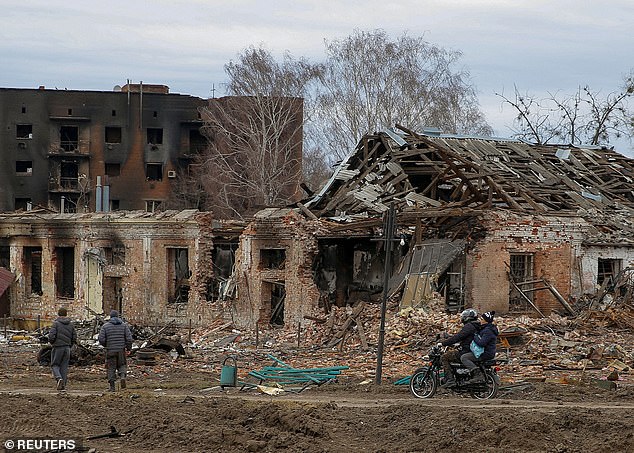 Russia is in its second month of invasion of Ukraine after initially attacking on February 24, 2022

The president just spewed another gaffe Monday when trying to clarify his comments about not allowing Putin to stay in power, insisting he was expressing his outrage at the Russian leader’s brutality in Ukraine rather than unveiling a new U.S. policy.

The comments alarmed allies and partners on Saturday when he said at the end of a speech in Warsaw: ‘For God’s sake, this man cannot remain in power.’

The White House quickly tried to walk back the comments, saying the president meant Putin could not continue to wield power over neighbors.

And other Western leaders said they feared that any hint of regime change might make it harder for Putin to dial back his deadly war in Ukraine.

Biden was asked about the comments after he unveiled his 2023 budget at the White House on Monday afternoon.

‘Number one, I’m not walking anything back,’ he said.

‘The fact of the matter is, I was expressing the moral outrage I felt toward the way Putin is dealing … and the actions of this man, which is just brutality.’ 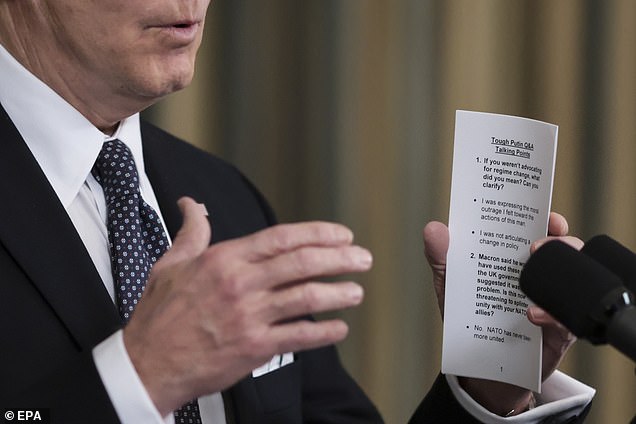 The president on Monday was seen holding a cue card in his left hand as he addressed reporters. It included pointers that he used during questions, including saying his comments about Putin were sparked by his ‘moral outrage’

Biden, 79, said he was not concerned that his comments would escalate tensions over the war in Ukraine.

‘This is just stating a simple fact, that this kind of behavior is totally unacceptable,’ he said.

But he faced a barrage of questions from reporters attempting to clarify his position and whether he had blundered. 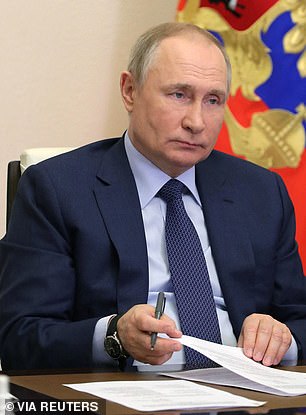 Biden’s comments were seized on by Moscow and President Vladimir Putin’s allies. Kremlin spokesman Dmitry Peskov told reporters: ‘This is a statement that is certainly alarming’

He was asked whether he had misspoken repeatedly by at one stage sounding as if he was telling U.S. troops they were about to go to Ukraine, as if he was suggesting the U.S. might use chemical weapons, and as if he was calling for regime change.

And last week, Biden said NATO would respond ‘in kind’ if Russian forces used chemical weapons – forcing another official to clarify that the U.S. had no intention of using chemical weapons.

On Monday Biden also rejected the idea that his words could have escalated tensions over Ukraine.

‘Nobody believes… I was talking about taking down Putin,’ he said, adding: ‘The last thing I want to do is engage in a land war or a nuclear war with Russia.’

Instead he insisted he was expressing an ‘aspiration’ rather than a goal of American foreign policy.

‘People like this shouldn’t be ruling countries. But they do,’ he said. ‘The fact they do doesn’t mean I can’t express my outrage about it.’

The White House had already tried clean-up. It said the crucial nine words were not part of his scripted speech.

‘The president’s point was that Putin cannot be allowed to exercise power over his neighbors or the region. He was not discussing Putin’s power in Russia, or regime change,’ a White House official said. 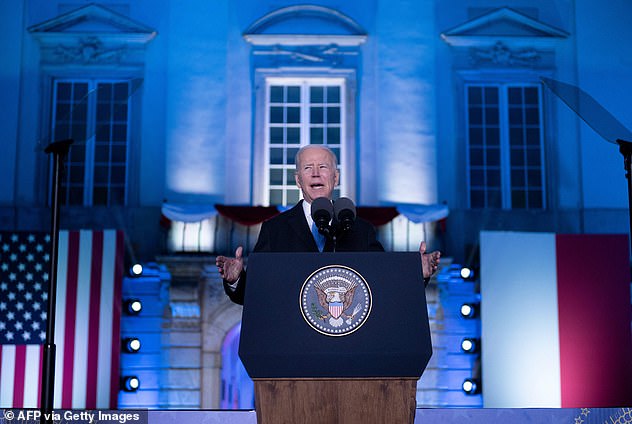 Biden delivered his controversial remarks right at the end of his three-day trip to Europe, at the end of a speech in the Polish capital Warsaw on Saturday. The White House then had to walk back his comments and insisted he wasn’t advocating for regime change

And the issue dogged Secretary of State Antony Blinken during his trip to the Middle East, where he was trying to build U.S. relationships as Washington pursues a new nuclear deal with Iran.

During a news conference in Jerusalem, he said: ‘Putin cannot be empowered to wage war or engage in aggression against Ukraine or anyone else.’

But his comments have provided ammunition for the Kremlin as it continues its war in Ukraine.

Kremlin spokesman Dmitry Peskov told reporters: ‘This is a statement that is certainly alarming.’

He added that Russian officials would ‘continue to track the statements of the U.S. president in the most attentive way,’ Peskov added.

French President Emmanuel Macron said the use of such inflammatory language would not help an already volatile situation.

He said he would not have used Biden’s words and that the focus had to be on finding a ceasefire and securing the withdrawal of Russian forces by diplomatic means.

‘If we want to do that, we can’t escalate in either words or actions,’ he told broadcaster France 3. 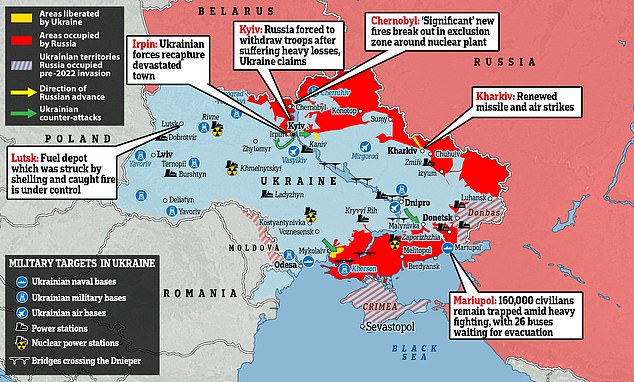 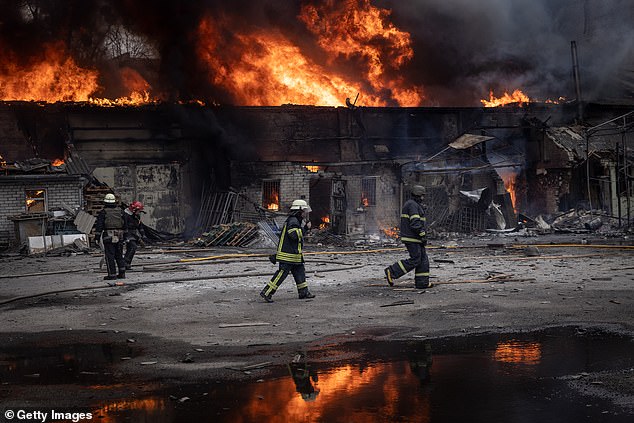 Firefighters work to extinguish a fire at a warehouse hit by Russian shelling on March 28, 2022 in Kharkiv, Ukraine. More than half Kharkiv’s 1.4 million people have fled the city 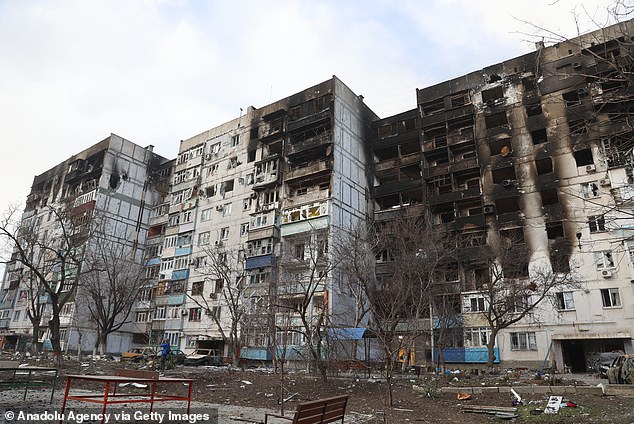 The southern Ukrainian city of Mariupol (pictured) is on the verge of a humanitarian catastrophe and must be completely evacuated, its mayor said today