A pensioner in his 70s has died and his wife has been hospitalised after they both suffered gunshot wounds at their home in a picturesque Essex village.

Both pensioners were airlifted to hospital last Friday, after police were called to the property in Little Baddow, Chelmsford, at around 8.40am following reports a woman had been injured.

On arrival, officers found the pair with gunshot injuries, and they were both taken to Addenbrooke’s Hospital in Cambridge.

Essex Police confirmed on Saturday the man had died in hospital on Friday evening while the woman, who is also in her 70s, is still receiving medical treatment. 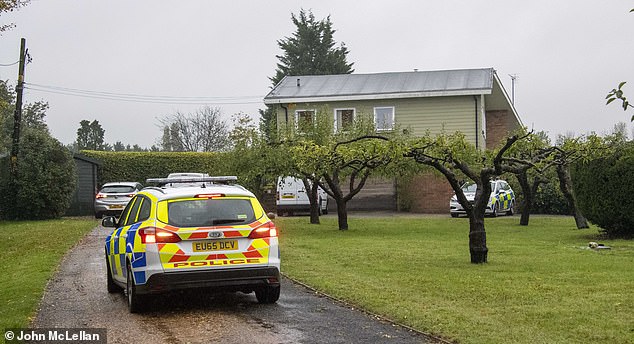 Police and forensic investigators were called to the property near Little Baddow Fruit Farm and Caravan Park in Chelmsford, Essex, following reports a woman had been injured

Essex Police officers pictured at the scene last Friday. The force confirmed on Saturday that the man had died in hospital on Friday evening while the woman is still receiving treatment

The force do not believe anyone else was involved in the shooting, which took place near the Little Baddow Fruit Farm caravan park in a village of just 1,500 people.

The incident occurred close to St Mary’s Church and the Little Baddow Chapel – an area with very few properties.

A police helicopter was also reported circling in the sky above the property.

A spokesperson for Essex Police said on Saturday: ‘A man died in hospital yesterday having been found with gunshot wounds at a property in Little Baddow.

‘The man, aged in his 70s, was taken to Addenbrooke’s Hospital in Cambridge along with a woman, also in her 70s, but died yesterday evening.

‘The woman continues to receive medical treatment. A police investigation is continuing.’ 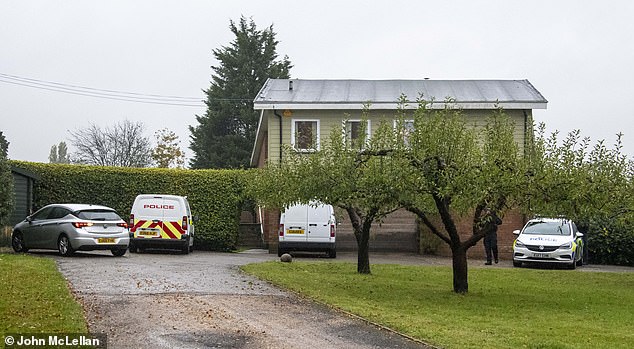 Police vehicles outside the home in Little Baddow, Essex, which has a population of just 1,500 people. A police helicopter was also reported circling in the sky above the property

The home which police attended in Little Baddow. The force do not believe anyone else was involved in the shooting, which took place in an area with very few properties

The spokesperson said: ‘Two ambulances, three vehicles from the Hazardous Area Response Team and two Essex and Herts Air Ambulances attended a property on Church Road in Little Baddow on Friday morning just before 9.00am.

‘Two patients were treated for gunshot wounds and transported by air ambulance to Addenbrooke’s Hospital.’