Diamond GIZAS! Pair of weather-beaten sphinx statues that were used as garden ornaments sell for £195,000 after experts realise they are genuine 5,000-year-old Egyptian relics

A family have been left stunned after a pair of ancient Egyptian sphinx statues which they had been using as garden ornaments sold for £195,000 at auction.

The lumps of stone were purchased for just £300 some 15 years ago, and were though to be be 18th or 19th century replicas, initially being valued at no more than £500 by Mander Auctioneers of Sudbury, Suffolk.

But art experts recognised them as likely to be ancient Egyptian artefacts, dating back up to 5,000 years, leading to intense bidding for them at an auction on Saturday.

The family from Clare, Suffolk, who owned the sphinxes, each around 110cms long, had bought them at a country house sale in Cambridgeshire.

The moss-covered statues which had been repaired with modern cement were eventually snapped up by an international art gallery for £195,000 with a 24% premium added, meaning £241,800 was paid.

The badly weathered lumps of stone (pictured) were originally thought to be 18th or 19th century replicas and valued at between £300 and £500 by Mander Auctioneers of Sudbury, Suffolk

As well as being repaired with concrete by a local builder, they were also cemented to the patio to stop them falling over.

Auctioneer James Mander said: ‘We were contacted by a local family who were moving house and needed to dispose of stuff from their old garden, which did not fit their new home.’

Mr Mander said he gave the low valuation on the basis of the previous sale particulars which suggested the statues, featuring a human head on the body of a lion, were replicas acquired by a traveller on a grand tour in the 18th or 19th century.

He added: ‘The condition was quite poor with heavy wear and various losses. They had been repaired by the current owners, using concrete, to fill the missing part under the head of one of the statues.

‘They had stood on garden patio as decoration until last month, when they were consigned to the auction.

‘There was some interest prior to the auction during the viewing, but really we had no indication of their value until the auction began.

Art experts recognised them as likely to be ancient Egyptian artefacts, dating back up to 5,000 years, leading to intense bidding for them at an auction on Saturday 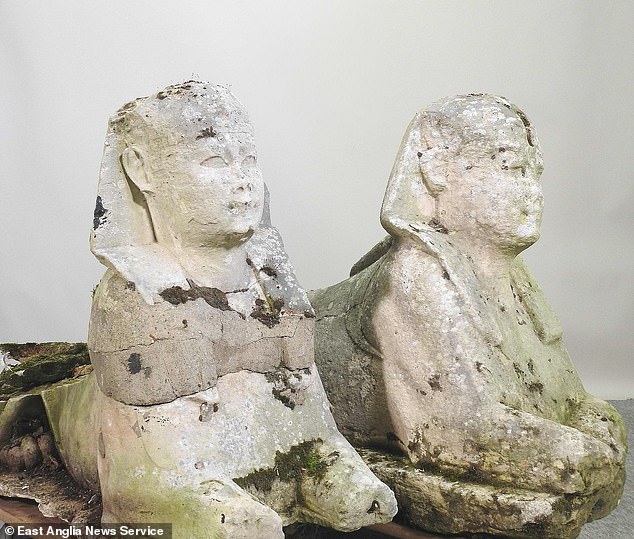 The moss-covered statues which had been repaired with modern cement were eventually snapped up by an international art gallery for £195,000 with a 24% premium added, meaning £241,800 was paid

‘The bidding started at £200, and it took fifteen minutes to sell, with competition from four telephone bidders and numerous internet buyers.

‘The bidding quickly went up to £100,000 and then seemed to stall, until the hammer finally fell at £195,000 to an international auction gallery, setting a new house record.

‘Opinion was that they were genuine ancient Egyptian examples, which had somehow passed through recent history as 18th century copies.’

Mr Mander said: ‘This was an exciting day at the auction, and we were very pleased to inform the vendors who had purchased and enjoyed these as garden ornaments for many years, with no idea of their true value.

‘These are one of the highest value lots to be sold at a provincial auction this year.’