Thamer Alkhammat has achieved fame around Melbourne as the Uber driver who is always smiling.

“In Iraq many times they tried to kill me and I am still happy,” says Alkhammat, who came to these shores in 2016 after he was invited to address a conference and then applied for refugee protection.

Now Alkhammat has swapped the certainty of danger in Iraq for the seemingly never ending bureaucratic uncertainty of the Department of Home Affairs visa application process. He reached breaking point last month when he found out that his right to work had been taken away. 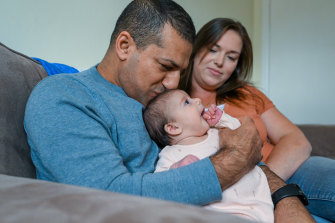 His dealings with the Department of Home Affairs has undertaken a Kafkaesque complexity after his marriage to his “blondie Aussie” wife (his words) Elisha van den Brink in June 2020.

“It’s critical for me, it is like a fight for survival now in my mind,” Alkhammat tells The Sunday Age.

The issue came to light when Alkhammat arranged health centre work so his physiotherapy qualifications – he once worked with the Iraqi national soccer team – could finally be recognised locally.

But the agency visa check said he had no work rights. This was news to Alkhammat, who said he had been granted work rights for his bridging visa C back in 2017. “I lost this opportunity to work in my profession.”

Alkhammat has achieved fame in the Melbourne Uber community. He hit the headlines after receiving a single tip of $200 from one customer and was dubbed “Melbourne’s top Uber driver”. Passengers in his Hyundai i30 notice his sweet-smelling essential oils, bespoke chill-out music, Turkish lollies, bottled water, phone charger and Wi-Fi.

Commercial Passenger Vehicles Victoria, which used to be called the Taxi Commission and is the agency responsible for the regulation of the taxi and hire car industries, recently hired him to film a safety video.

Monash Health sent him a certificate in appreciation after he helped to develop a foot massage program to ease the discomfort for dialysis patients.

But now Alkhammat is back to square one after he married Van den Brink in June 2020. They now live in Clayton with Elisha’s two step children and two-month-old baby Amira, which means princess.

“Complex, hard and inhuman,” is how Alkhammat describes Home Affairs.

His first taste of Australia in 2016 after he was invited here as a visitor to address a conference for the Australian Sport Medicine Association. He spent a few months in Australia after a medical mishap meant he was too ill to attend the conference.

But while in Australia, his name appeared in local media in Iraq, where he made political enemies in 2011 and was kidnapped and tortured by local militia, according to documents seen by The Sunday Age.

After this scare he submitted an application for safe haven as a refugee and was granted a temporary protection visa, with full work rights granted the following year after another application.

When Alkhammat married in June 2020, he submitted an application for a partner visa in December 2020 and was granted another bridging visa, which contained no work rights.

But in 2021, after he applied to the Administrative Appeals Tribunal to drop his fight for a protection visa, that bridging visa stopped, and his work rights were not transferred to his partnership visa application.

The Department of Home Affairs said it would not comment on individual cases.

A department spokesman said bridging visas were granted in association with specific applications.

“If an applicant has multiple applications before the department, they can hold a different BV associated with each individual application,” he said.

“Only one BV will be in effect at any one time. BVs will also cease to be in effect if a substantive visa is granted.”

He added that formal grant notices advise if any new conditions were applied.

Alkhammat is still waiting for the result of applying for partner visa and a reply to his April 28 email.

“Why should I apply for another hardship (exemption) when I was granted one five years ago?”

“Every time you advance one or two steps forward, they push you 10 steps backwards,” he said.

He has decided to speak out despite the risk to his work prospects in going forward because he believes work rights should be rolled into his new bridging visa.

“I am now climbing the mountain.”