THE official coronavirus R rate has slightly dropped for the sixth week.

The figure – which represents the number of people an infected person will pass Covid onto – is now between 0.6 and 0.9 across the UK, Sage said today. 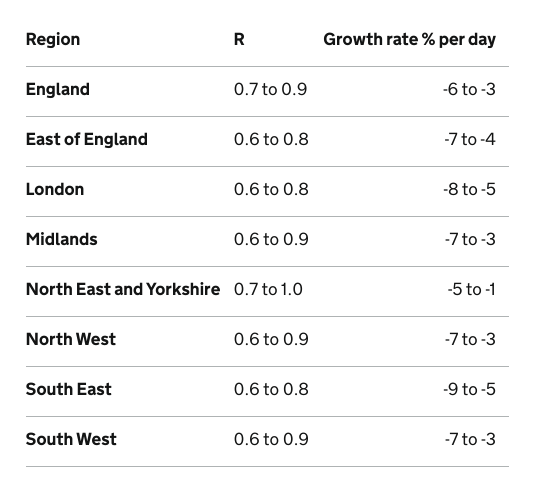 Last week the number across the UK 0.7 and 0.9, with the rate across England the same.

When the R is below 1, it means transmission is low enough for the epidemic to shrink – but greater than 1, it suggests the outbreak is growing.

Sage states that R is a lagging indicator and that the estimates "cannot account for the most recent policy changes, nor changes in transmission that have not yet been reflected in epidemiological data."

Meanwhile, the growth rate is -6 per cent to -3 per cent, meaning the size of the outbreak is shrinking by as much as six per cent each day.

Last week this figure was -5 per cent to -2 per cent. It has not been growing since the week to January 15.

The estimates from Sage come after the experts at the Covid Symptom Study App revealed their R rate prediction of 0.9.

They state that the fall in daily new cases has begun to slow with R values moving back towards 1.0 with most regions at 0.9.

Their app estimates suggest that since January, cases have fallen by 80 per cent – but that in the last week, symptomatic cases have come down by only five per cent.

Lead scientist of the app, Professor Tim Spector said that although new cases have fallen for six weeks in a row in the last few days the rate of decline has plateaued.

He said: "This is mainly true in places like Scotland, Wales and the Midlands compared to London and the East.

"It’s unclear why this is happening, although people relaxing their guard after vaccination or altering behaviour in the cold weather are possible."

He did however add that it was encouraging that hospital admission were falling and are lower than the peak in January.

What does R rate mean?

R0, or R nought, refers to the average number of people that one infected person can expect to pass the coronavirus on to.

For example, if a virus has an R0 of three, it means that every sick person will pass the disease on to three other people if no containment measures are introduced.

Scientists use it to predict how far and how fast a disease will spread – and the number can also inform policy decisions about how to contain an outbreak.

It's also worth pointing out that the R0 is a measure of how infectious a disease is, but not how deadly

Last month there were around 37,000 people in hospital with Covid in the UK with 4,032 on ventilators.

Data from the government's coronavirus dashboard shows that this has dropped off significantly.

At present there are 20,156 patients in hospital with Covid-19 and 2,614 requiring support from a ventilator.

Prof Spector added: "With cases still falling in the at-risk age groups and the vaccination roll out continuing there is still reason to be hopeful – but we clearly can’t be complacent."

Data published by the Office for National Statistics (ONS) today stated that 481,300 people had Covid in England in the week to February 12, the equivalent of one in 115 or less than one per cent of the population.

This means that cases of the virus have fallen by close to a third in just one week.

And it is the lowest figure since November 29 to December 5, when the estimate also stood at one in 115 people.

The promising data is yet more proof that the Covid outbreak is shrinking, and bodes well for this weekend when the Prime Minister sets out the "roadmap" out of lockdown.

Boris Johnson's announcement on Monday evening is set to reveal schools will open on March 8, and the reopening of non-essential shops will follow in a "cautious" move to lift restrictions.