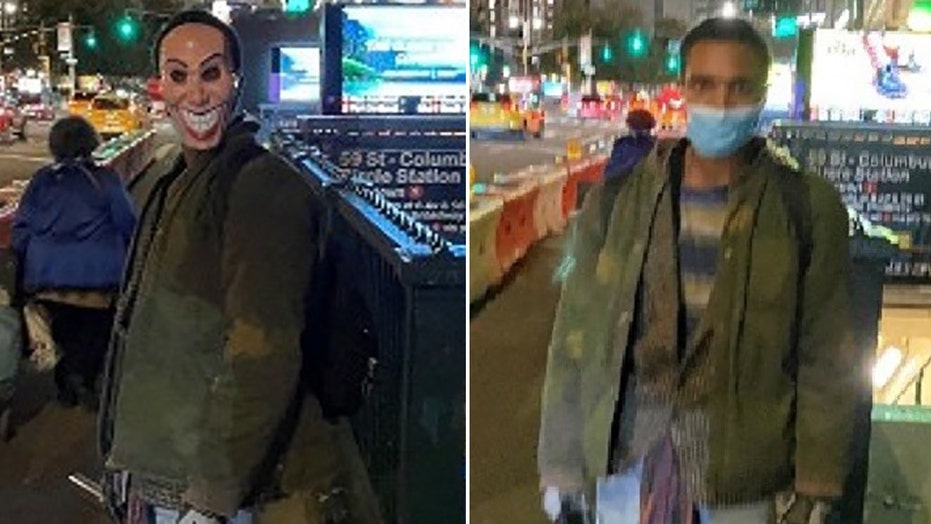 An ax-wielding man seen wearing a grinning Halloween mask in New York City is wanted in connection to an attack on another man in Manhattan on Monday night, authorities said.

The suspect, who has yet to be identified, approached the 51-year-old victim just after 10 p.m. on Broadway near Columbus Circle and threatened to kill him, the NYPD said.

The ax-wielding man then struck the victim on his left arm with the weapon before fleeing on foot into the 59th Street-Columbus Circle subway station, according to police. 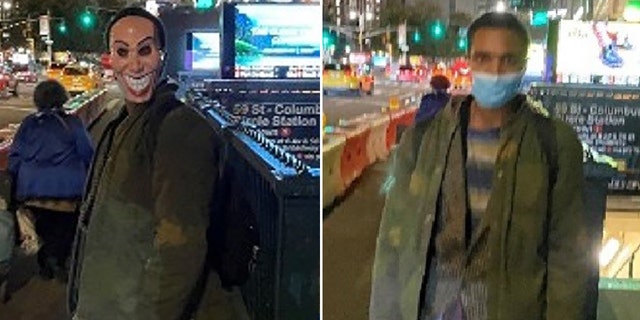 Police described the suspect as a dark-skinned male who wore a blue mask, a dark-colored coat, blue jeans and black boots.
(NYPD)

First responders took the victim to Mt. Sinai Morningside hospital, where his condition was described as stable.

Police released a photo of the suspect wearing the grinning mask and another photo of him wearing a blue face mask. Police described the suspect as a dark-skinned male who wore a blue mask, a dark-colored coat, blue jeans and black boots.

Authorities asked anyone with information about the incident to call the NYPD’s Crime Stoppers Hotline at 1-800-577-TIPS (8477).

On Wednesday, the NYPD released citywide crime statistics for the month of October. The data showed that while murders and shootings incidents continued to decline, the overall crime index increased 11.2 percent compared to the same period last year.

Incidents of felonious assault increased by 13.8 percent to 2,123 last month from 1,865 in October 2020, according to NYPD statistics.