Number of marriages slumps to lowest level since QUEEN VICTORIA was on the throne with 6.4% decline in a year – and more PENSIONERS are tying the knot than under-24s for the first time

The number of marriages in England and Wales slumped to their lowest rate in more than a century before the Covid lockdown, new figures revealed today.

The figures from the Office for National Statistics also show a continued slump in weddings involving young adults, at a time when house prices are soaring and out of reach of many.

The rate of marriages of people aged under 24 fell below that of pensioners aged 65 and over for the first time, the data showed. 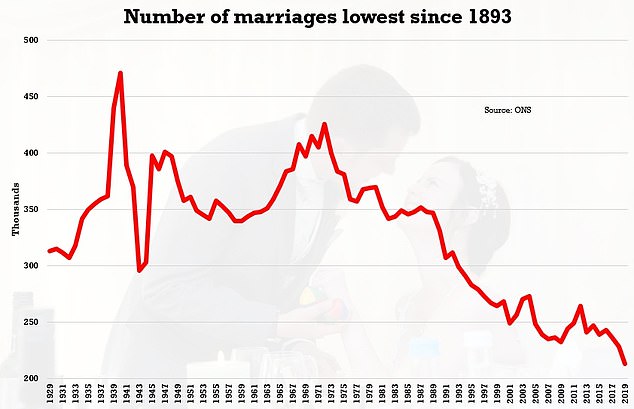 Dr James Tucker, the OINS’s  Head of Health and Life Events Analysis, Office for National Statistics said the numbers showed that the number of heterosexual marriages had halved since 1972.

‘This decline is a likely consequence of increasing numbers of men and women delaying marriage, or couples choosing to live together rather than marry, either as a precursor to marriage or as an alternative,’ he said.

The rate is almost certainly doing to decline dramatically in future when the impact of the pandemic is seen. Weddings were hugely affected by lockdown rules in place in 2020 and 2021.