NSW Premier Gladys Berejiklian says the border between Victoria and NSW could open within a month if case numbers in Victoria remain low.

Her comments came as Victorian Premier Daniel Andrews said he hoped NSW and South Australia would reopen to regional Victoria as soon as this week. 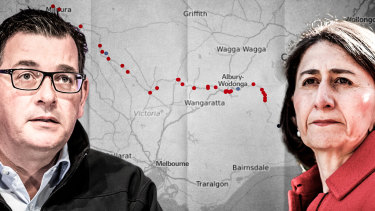 The NSW-Victoria border was shut for first time in 100 years in July as Victoria’s second wave surged.Credit:Steve Kiprillis

Ms Berejiklian on Monday said she wanted to wait until at least two weeks after Victoria "substantially" eased coronavirus restrictions to have confidence that case numbers would not experience a resurgence.

She pointed to Melbourne's new 25-kilometre movement bubble as a good test of Victoria's contact tracing capacity under looser restrictions, raising hopes the border – shut since July 6 – could open to all Victorians as soon as early November.

"We are very keen to see what happens in Victoria once further restrictions are eased because that's the real test," the NSW Premier said on Monday.

"And if Victoria demonstrates that they've … upped their contact tracing capacity, that they're able to demonstrate they're not going to have uncontrolled outbreaks whilst they're easing restrictions, well that will give us confidence to open the borders." 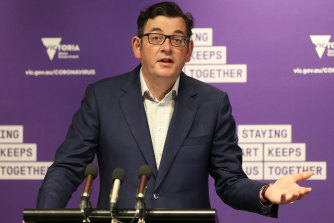 Premier Daniel Andrews said no decision had been made on when the ‘ring of steel’ could be lifted.Credit:Getty Images

Restrictions will be further eased in Melbourne on November 2, or possibly sooner, when hospitality and retail will reopen and limited home visits will be allowed.

But while interstate travel is being reviewed Victorians are still unable to travel freely in their own state, with no set date for the abolition of travel restrictions between regional and metropolitan Victoria.

Victorian Tourism Industry Council chief executive Felicia Mariani on Monday pleaded for an indication on the date or criteria for relaxing those restrictions, warning tourism operators had already received millions of dollars in valuable bookings from Melburnians for the Melbourne Cup long weekend.

Ms Mariani welcomed the prospect of visitors from NSW and South Australia to regional areas but said the real lifeline to reeling regional businesses would be allowing travel within Victoria.

"The industry desperately need to know, is Melbourne Cup weekend a go or no go? It's getting to critical time, the next real event is Christmas," Ms Mariani said.

"So many businesses had a much depleted Christmas season last year because of bushfires and the numbers that won't survive if this summer doesn't get up and running will be remarkable. That's where the industry is at right now – on tenterhooks." 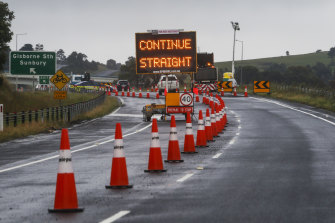 Premier Daniel Andrews said the checkpoints, soon to be reinforced by more ADF, should give confidence to other Premiers.Credit:Paul Rovere

Mr Andrews told his daily press conference on Monday that no decision had been on intrastate travel and the "ring of steel" between metropolitan and regional Victoria will soon be reinforced by up to 100 additional Defence Force Troops.

Tasmania on Monday announced it would reopen to travellers from NSW on November 2, but remain shut to Victorians until December.

Mr Andrews said he would speak with Ms Berejiklian and South Australian Premier Steven Marshall about reopening to regional Victoria this week ahead of a national cabinet meeting on Friday.

Regional Victoria has seven active coronavirus cases in just two local government areas, including in Shepparton where an outbreak has remained at three cases. Mr Andrews said the bolstered "ring of steel" should give confidence to the neighbouring states.

Mr Andrews floated the idea of an accreditation system in response to the South Australian government warning it had no way of tracking whether a regional Victorian had recently visited greater Melbourne, where there were 129 active cases on Monday.

A spokeswoman for Mr Marshall said: "A border opening with Victoria is currently not imminent."

"The [government] constantly monitors the situation, however, given we are unable to control any travel between Melbourne and regional Victoria, it is not easy to simply open up to one and not the other." 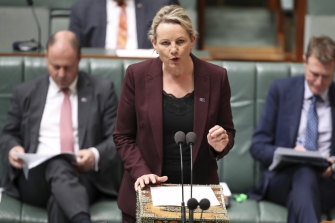 Environment Minister and MP for Farrer, Sussan Ley, in Parliament House in Canberra on Monday.Credit:Alex Ellinghausen

Federal Liberal MP and Environment Minister Sussan Ley, whose electorate of Farrer covers most of the NSW side of the Victoria-NSW Border, said if Melbourne's case numbers remained manageable, NSW could open its border to regional Victoria "pretty quickly".

"The hard border closure has always been about what was happening in Melbourne; here on the Murray no one wants it to be here and we also want it removed as soon as possible," Ms Ley said.