The NSW government secretly offered $50 million in taxpayer funds to Qantas to head off a bidding war with rival states to keep the airline’s global headquarters in Sydney.

Under heavy financial pressure from the effects of the global pandemic, Qantas announced last September it was reconsidering the location of its headquarters in a move heavily criticised by federal Trade Minister Simon Birmingham as a “blatant appeal for corporate welfare”.

Nevertheless, a week after a confidential package was outlined in a letter from Treasurer Dominic Perrottet to Qantas chief executive Alan Joyce, the company announced in April that agreements were being finalised to keep the national carrier’s headquarters in NSW.

The agreements were to be commercial-in-confidence.

However, the Herald can reveal the contents of the Treasurer’s proposal after his letter was included in a trove of documents tabled to State Parliament.

It gives the first indication of the lengths the NSW government had been willing to go to, to entice Qantas to remain in Mascot, in Sydney’s inner-south, after the company announced a review of its property footprint.

The lure of the company’s 3500-strong workforce sparked a bidding war with Queensland and Victoria.

Mr Perrottet’s offer came with strings attached, including that the airline must create an additional 2000 jobs and run its new ultra long-haul flights exclusively out of Sydney for five years.

The offer remains the subject of ongoing negotiations even though the three-way tussle ended in early May with Qantas’s statement to the ASX.

The company said it would be investing $50 million over a decade in exchange for a range of benefits from state governments, including payroll tax relief, tourism marketing funding, property rebates, training support and directive incentives. 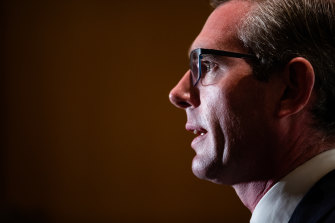 NSW Treasurer Dominc Perrottet has been working on a $50 million bid to keep Qantas in NSW. Credit:Edwina Pickles

A Qantas spokesman told the Herald it had received the “draft offer” from the NSW government about a week before it finalised its decision to remain in Sydney.

“It does not reflect the final agreement which, as we said in our announcement of 6 May, is still being negotiated,” the spokesman said.

“We won’t be commenting on any detail of the agreements with any of the states because they are commercial-in-confidence.

“In principle, though, these agreements are about states recognising the significant value that the Qantas Group will bring to each local economy in the years ahead.”

A spokesperson for Mr Perrottet said: “A final binding deal with Qantas is yet to be agreed, and we continue to work on the details after reaching an in-principle agreement in May.

“Any final agreement will protect and grow jobs, support what is a vital sector for the economy, and be in the best interests of the people of NSW.”

Mr Perrottet fired off his offer to Qantas within days of receiving a request from the company on April 21.

In his April 29 response, Mr Perrottet said the airline would receive $50 million over four years if it abided by a series of conditions set by the government.

“The NSW government’s aim in presenting this offer is to lay the foundations for a 30-year partnership that will create economic value to NSW,” he wrote.

The conditions included Qantas remaining in NSW until at least 2051 and establishing a simulator centre and a centre for service excellence for pilots and cabin crew within the state.

The airline had to commit to no net job losses and the creation of at least 2000 full time-equivalent jobs over the first five years. 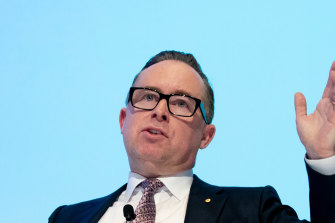 Qantas loyalty staff had to be relocated from Melbourne to Sydney and Project Sunrise had to be based exclusively in Sydney for at least five years.

Project Sunrise will see non-stop flights launched from the east coast of Australia to London and New York.

Qantas was required to vacate its simulator facility by next April to avoid delays to the Sydney Gateway motorway project, which will link the WestConnex with Sydney Airport.

The airline was also to commit to Indigenous and gender diversity employment targets.

“Should only a subset of the sought conditions be delivered, the state will claw back the financial incentives package in proportion to the reduction in benefit to the state,” the proposal said.

“Reallocation of funds for anything other than the purposes set out in this term sheet will require repayment of such amounts by Qantas.

“I look forward to continuing this conversation and finalising an agreement reflecting the conditions set out below that delivers for the residents of NSW as well as meets your strategic objectives.”

The letter was forwarded in an email chain to bureaucrats within the Department of Premier and Cabinet.

They subsequently reproduced it, unredacted, in response to a call for papers about the deal by Labor MLC Daniel Mookhey.

Mr Joyce said the property review was part of a cost-cutting drive to recover from a revenue hit as a result of COVID-19 travel restrictions.

In February, Qantas announced its revenue in the six months to the end of December had fallen by nearly $7 billion, leading to a statutory loss before tax of $1.47 billion.

As of May around 6000 workers remained stood down across the Qantas group. The company announced voluntary redundancies, on top of 8500 roles that have already been cut.