“Sunday will be the last day we officially do a press conference in this way,” Ms Berejiklian said.

“From Monday at 11am, Health will provide a daily health update [via an online video] and myself and [Health Minister Brad] Hazzard or any other relevant minister will present to the community on a needs basis.” 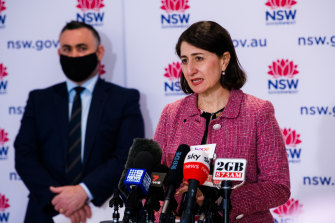 There were nine deaths recorded since Thursday’s update, including a man in his 30s from Nepean Blue Mountains who died at Nepean Hospital.

Some “tweaks” have been made to the slight easing of rules around outdoor recreation for the fully vaccinated, due to come into force on Monday.

In local government areas of concern, people who are fully vaccinated in a household may now gather for two hours for outdoor recreation, in addition to exercise.

Children aged under 12 will not be included in the five-person cap for outdoor gatherings of fully vaccinated people outside of these areas.

The Premier said 76.4 per cent of the NSW adult population had now received a first dose and 43.6 per cent were fully vaccinated. These figures, previously announced at press conferences, will now be published by NSW Health on its website.

On Thursday, the Premier announced a road map for the NSW economy to reopen at 70 per cent full vaccination, allowing for people who have received both doses of a COVID-19 vaccine to gather in small groups in homes, eat at restaurants, go to gyms and even attend stadium events with a capacity limit.

Lockdown restrictions will lift in some regional NSW local government areas on Saturday. From Monday across the state, fully vaccinated people may gather outside for recreation in groups of five or in their household group if they live in a local government area of concern.

COVID-19 exposures have continued to affect Sydney’s hospitals, with two patients and three nurses in a geriatric ward cluster at St Vincent’s Hospital in Darlinghurst testing positive this week.

The hospital confirmed both patients are unvaccinated. Of the three nurses who have tested positive, two have received both vaccine doses and one is unvaccinated.

Police have charged four Sydney arborists who allegedly returned to regional NSW to doorknock for work after previously being fined and ordered to go home.

Seven men were last week fined $33,000 after telling police they had been working in the Lake Macquarie region and returning to Sydney on the weekend, including to hotspot local government areas.

About 2.30pm on Thursday, police received a tip-off that a group of six arborists were once again doorknocking homes in the region.

Police say the 41-year-old from Kingswood, 25-year-old from Leumeah, 57-year-old from Colyton and 37-year-old from Whalan had previously been issued fines for breaching health orders. They allege the group were operating under a different business name and had removed all company identification from their vehicles.

A fifth man – a 33-year-old from Ropes Crossing – was fined $6000 for breaching health orders and providing inaccurate information in his permit application. Investigations remain ongoing into the sixth man.

There were 334 new cases reported in Victoria on Friday. One additional Victorian has died from the virus.