Now Sir Cliff Richard joins demand for crackdown on police: Star who was a victim of false abuse allegations is ‘honoured’ to join group calling for greater accountability from forces

Sir Cliff Richard has joined the landmark group demanding greater accountability in the police and a shake-up of the watchdog that investigates misconduct by officers.

The 80-year-old has added his name to those of seven people who wrote to Boris Johnson last week demanding an overhaul of Scotland Yard’s senior management team, ‘urgent and long overdue’ reform of the police complaints system and a revamp of the ‘unfit for purpose’ Independent Office for Police Conduct (IOPC). 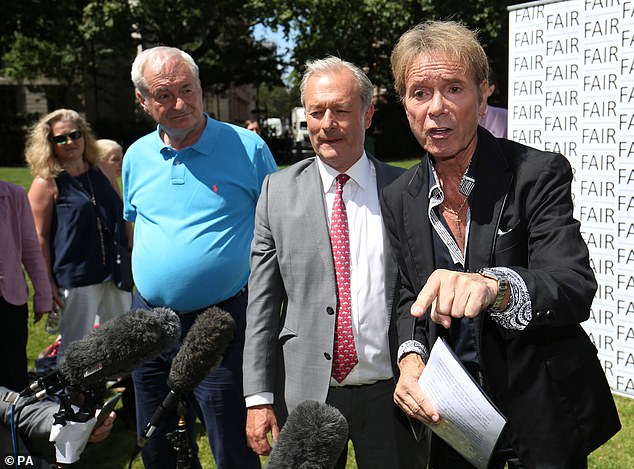 Sir Cliff, the victim of a shambolic inquiry by South Yorkshire Police into false sex abuse allegations, has added his influence to the growing campaign for greater accountability in forces Now Sir Cliff, the victim of a shambolic inquiry by South Yorkshire Police into false sex abuse allegations, has added his influence to the growing campaign for greater accountability in forces.

He told the Mail: ‘I was very moved by the letter to Boris Johnson and thrilled to read the names of the seven supporters of the justice project. I am honoured to join this wonderful group. I am absolutely behind this project.’

BBC broadcaster Paul Gambaccini, 72, who was on police bail for 12 months after being arrested on suspicion of historical sex offences in 2013 before being told he would not be charged, said: ‘Cliff Richard is one of the greatest Britons of the 20th century.

The first woman to lead the National Crime Agency is to step down so she can fight breast cancer.

Lynne Owens announced her retirement yesterday after five years in charge and more than three decades in policing. It could pave the way for the succession of Steve Rodhouse, who led the bungled Scotland Yard VIP child abuse inquiry.

A former Met deputy assistant commissioner, he is one of her three deputies and the only other senior figure at the NCA with a policing background. However, Mr Rodhouse, pictured, faced calls to resign over his leading role in Operation Midland, Scotland Yard’s calamitous investigation into allegations of a VIP sex abuse ring by fantasist Carl Beech.

Yesterday an NCA spokesman said no successor had been appointed and the Home Office would look to name an interim director general.

Dame Lynne said: ‘Following the treatment I received for breast cancer in the summer the prognosis remains entirely positive and I have recovered from the initial surgery well. However… I now require more extensive surgery.

‘I cannot, with integrity, conclude that it is in the interests of the agency to leave it with such uncertainty in leadership.’ Dame Lynne, 52, started out as a Met constable in 1989 and later led Surrey Police. She said: ‘It has been an absolute privilege to protect the public for the last 32 years.’

‘His persecution by leading institutions is one of the greatest scandals of the 21st. I have known Cliff for nearly half a century, and he is a truly outstanding man.

‘He is also one of the most loved people in our lifetime. To have him join our group is a tremendous contribution to our fight for justice.’

A month before announcing her controversial decision, Miss Patel had made no secret in conversations that she felt the gaffe-prone Met chief had ‘made too many mistakes’ and an outsider should be appointed to run the force.

Sources close to the Home Secretary have since defended the contract extension, saying ‘it’s better the devil you know’, and argued that retaining Dame Cressida was the least bad option, with no suitably qualified successors.

One of the most respected names in British showbusiness, Sir Cliff is set to exert more pressure on Dame Cressida and her colleagues after publicly backing the group of seven victims of police corruption, incompetence and malpractice who have vowed to hold the Metropolitan Police, provincial forces and the IOPC to account.

Five years ago he laid bare his ordeal at the hands of police and the BBC, saying he had suffered depression, distress and humiliation following false sex claims.

He accused the BBC of broadcasting a police raid on his home purely for entertainment.

The swoop in August 2014 was part of a probe into allegations by four men that dated back to 1958. Although Sir Cliff was never arrested, it took until 2016 for prosecutors to rule out charges.

Two years ago it was announced that the BBC would pay £2million towards his legal costs. In July 2018, he had won a High Court privacy case against the broadcaster over its coverage of a police raid on his home. The BBC was ordered to pay £210,000 in damages.

In their letter to Mr Johnson the group of seven said: ‘We share a collective concern that the leadership of the Metropolitan Police Service will continue to act as though they are above the law.’

No officers have been held to account over the Met Police’s disgraced Operation Midland inquiry.