Wuhan: The Huanan seafood market in the Chinese city of Wuhan, believed by many to be the origin of the COVID-19 pandemic, is sealed behind a blue perimeter fence. A large team of security staff chases away anyone who lingers.

"We are just doing our job," said a guard in black who ordered a Reuters reporter to delete footage recorded near the market's main gates. He identified himself as a worker from the city government's epidemic prevention and control team. 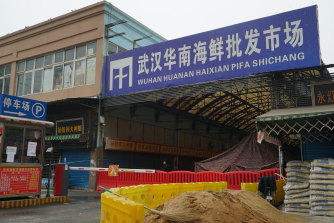 The Wuhan Huanan Wholesale Seafood Market, where COVID-19 is said to have originated.Credit:AP

Foreign journalists were invited on an official tour to report on Wuhan's efforts to rebuild its economy after the months-long trauma of COVID-19. The official message: the "heroic city" is back to normal and back in business, its schools and tourist sites reopened and its enterprises running at full capacity.

"No other place is as safe as this," said Lin Songtian, president of the Chinese People's Association for Friendship with Foreign Countries, a state-backed group that helped organise the tour.

The location of more than 80 per cent of the country's COVID-19 deaths, the central Chinese city on the banks of the Yangtze river has reported no cases of local transmission since April, and most of the stringent controls imposed during a two-month lockdown have been relaxed.

But Wuhan was accused of acting too slowly in the early stages of the outbreak amid fears of disrupting the economy or displeasing China's leadership in Beijing. Critics say media censorship and the silencing of whistleblowers gave the virus more time to spread undetected. 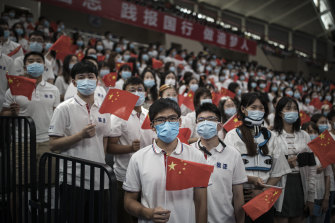 A group of seven thousand graduate students wear masks during the opening ceremony at Huazhong University of Science and Technology at the school’s stadium on September 4 in Wuhan.Credit:Getty Images

Wuhan remains reluctant to allow light to be shed on the origins of a pathogen that has killed nearly 900,000 people worldwide.

The city still restricts access to locations like the Huanan market, which was linked to the first identified cluster of infections in December.

At another wholesale market in the far north of city, which is open to the public, Reuters was tailed by security staff and deterred from speaking to stallholders and traders.

"If you don't allow people to visit these places, you give people the impression you have something to hide," said Yanzhong Huang, senior fellow at the Council on Foreign Relations in Washington who studies the politics behind China's health issues.

China rejects conspiracy theories surrounding the coronavirus, including claims without evidence that a specialist virology institute in Wuhan manufactured it. But many unanswered questions remain about the origins of COVID-19 and the role played by the trade in exotic wildlife in Wuhan.

Though authorities closed the Huanan market in January, there is a growing scientific consensus that the virus did not originate there. Some studies suggest it was already in circulation by the time it reached the market, with more than one transmission route.

"I agree with the general idea that the virus jumped into a human before the Wuhan market," said David Irwin, professor of medicine and pathobiology at the University of Toronto. "They may have been a trader that had been exposed either directly to the virus in a host animal or interacted with farmers or other traders outside of Wuhan."

China has shown little appetite for an international enquiry into the origins of COVID-19 or for allowing more scrutiny of its efforts in the early stages of the outbreak, preferring to focus on the country's rapid economic and psychological recovery.

"There is no doubt that China has been very successful in containing the virus, so why can't they be more open?" said Huang. "If you want to dispel those myths… you don't need to worry about people visiting the market or even the virus institute."