Just doing it: Nike says it will make a full exit from Russia three months after suspending operations in the country following the country’s invasion of Ukraine

Nike says it will make a full exit from Russia three months after suspending operations in the country following the country’s invasion of Ukraine.

The U.S. sportswear maker said on March 3 that it would temporarily suspend operations at all its Nike-owned and -operated stores in Russia in response to Moscow’s actions in Ukraine, adding that those still open were operated by independent partners.

On Thursday, it joined other major Western brands, like McDonald’s and Google, in confirming it will leave the country completely.

Foreign companies seeking to exit Russia over the war in Ukraine face the prospect of new laws being passed in the coming weeks allowing Moscow to seize assets and impose criminal penalties.

That has encouraged some businesses to accelerate their departure. 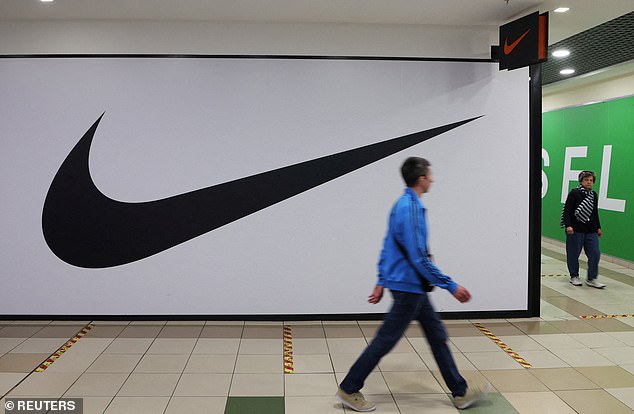 Nike will make a full exit from Russia three months after suspending operations there following the country’s invasion of Ukraine. Pictured: People walk past a closed store in Saint Petersburg, Russia on May 25, 2022 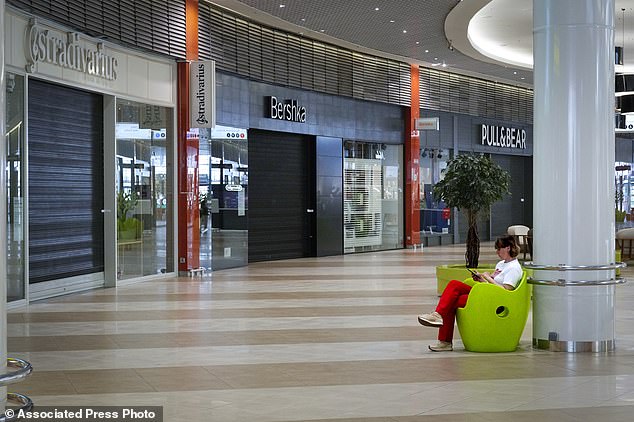 A woman sits looking at her smartphone in front of shops closed due to sanctions in a mall. Popular clothing brands, both luxurious and affordable, coffee and fast-food chains became unavailable to many Russians

‘NIKE has made the decision to leave the Russian marketplace. Our priority is to ensure we are fully supporting our employees while we responsibly scale down our operations over the coming months,’ the firm said in an emailed statement.

For Nike, which gets less than 1% of its revenue from Ukraine and Russia combined, the move is largely symbolic rather than material to its results. 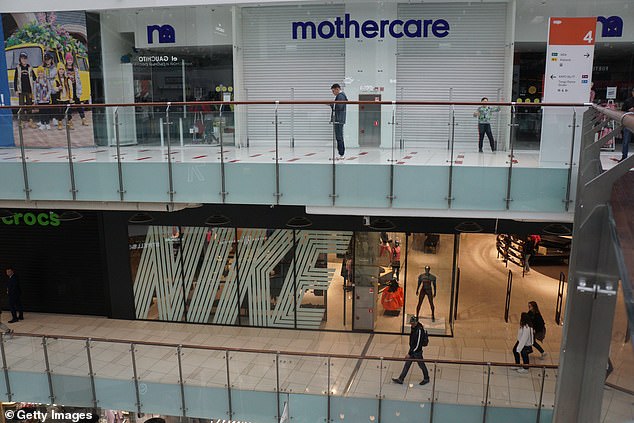 People walk near the entrance to Nike store, May 25, 2022 in Moscow, Russia. Nike Inc. with its 116 Russian stores and British retailer Marks and Spencer announced a full exit from Russia due to the western sanctions following the country’s military invasion of Ukraine 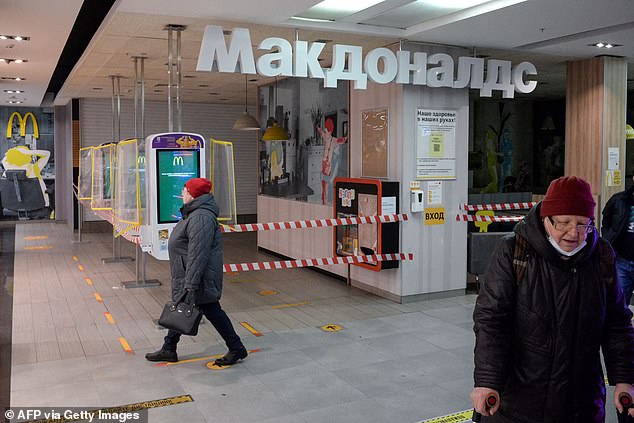 People walk next to a closed McDonald’s restaurant at a shopping mall in Moscow in March, after the company announced it would be closing its stores 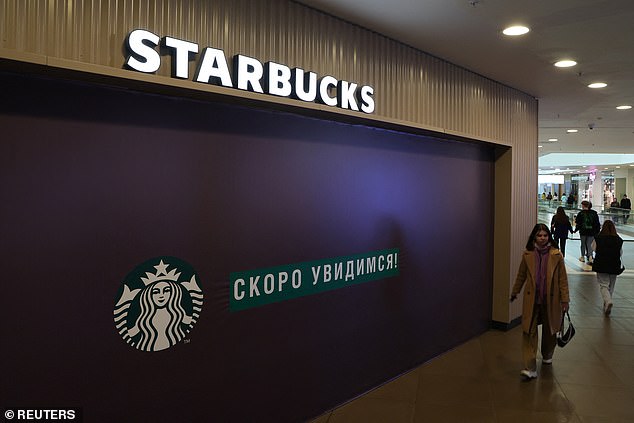 The company has a history of taking a stand on social and political issues, from supporting American football quarterback Colin Kaepernick in his decision to kneel during the national anthem as a protest against racism, to dropping Brazilian soccer star Neymar last year because he refused to cooperate in an investigation into sexual assault allegations.

Russian media reported in May that Nike had not renewed agreements with its largest franchisee in Russia, Inventive Retail Group (IRG), which operates 37 Nike-branded stores in Russia through its subsidiary Up And Run.

Shares in Nike were up nearly 1% in premarket U.S. trading.

Western brands have been pulling out of Russia leaving shopping malls in Moscow and St Petersburg to become ‘ghost towns’ with high street locations sitting empty – in protest over war in Ukraine which began on February 24.

The changes have been prompted by Western sanctions and a massive, unprecedented pullout of Western businesses that had become entrenched in the landscape of Russia’s daily life over three decades.

Dozens of foreign and international companies have withdrawn from the country, leaving behind half-empty malls and closed doors in places that once buzzed with customers.

Popular clothing brands, both luxurious and affordable, coffee and fast-food chains became unavailable to many Russians.

Luxury brands such as France’s Chanel and Louis Vuitton have announced they are suspending operations in Russia, adding to the country’s economic isolation imposed by the West in response to the invasion.

Prada, Dior, Louis Vuitton, Gucci and Fendi were among those to clear their shelves in the luxury shopping malls of the Russian capital as sanctions begin to bite.

American food and beverage giants including Coca-Cola, Pepsi and Starbucks have paused or closed operations in Russia in the face of western sanctions.

Corporations from British energy giants Shell and BP to French carmaker Renault have pulled out of Russia, taking a hit to their bottom lines as they seek to sell their holdings there.

Yum Brands, which operates the brands KFC, Pizza Hut, Taco Bell, The Habit Burger Grill, and WingStreet worldwide, said that it is suspending all investment and development of new restaurants in Russia, and that it will donate all profits from operations in Russia to humanitarian efforts.

Other major US companies that have recently announced their intention to leave Russia include Nissan, Levi jeans, Visa and Mastercard.

McDonald’s in March closed all of its 850 restaurants in the country – where it says it employs 62,000 people – including its iconic Pushkin Square location, the latest company to pull its business in Russia amid Western sanctions. 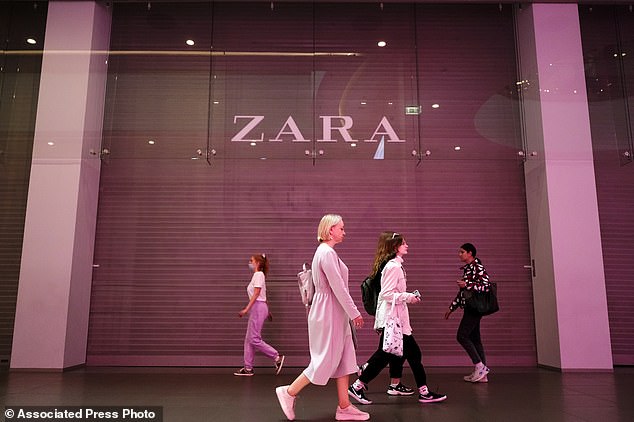 People walk past a Zara shop closed due to sanctions in a shopping mall in St. Petersburg. The Spanish fashion retailer Inditex, which owns Zara, halted trading in Russia in March 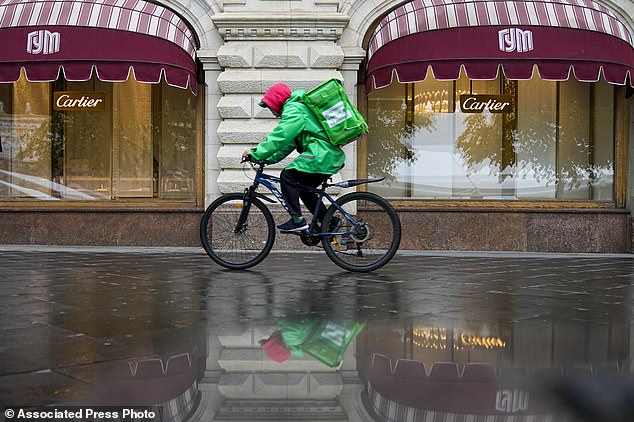 A food delivery man rides a bicycle along the GUM department store with a Cartier boutique closed due to sanctions in Moscow. Prada, Dior, Louis Vuitton, Gucci and Fendi were among those to clear their shelves in the luxury shopping malls of the Russian capital

The company said it would seek to have a Russian buyer hire its employees and pay them until the sale closes. It didn’t identify a prospective buyer. McDonald’s said it plans to start removing golden arches and other symbols and signs with its name.

As part of the exit, McDonald’s expects to record a non-cash charge of about $1.2 billion to $1.4 billion.

‘The humanitarian crisis caused by the war in Ukraine, and the precipitating unpredictable operating environment, have led McDonald’s to conclude that continued ownership of the business in Russia is no longer tenable,’ it said in a statement.

The first McDonald’s in Russia opened in the middle of Moscow more than three decades ago, shortly after the fall of the Berlin Wall. 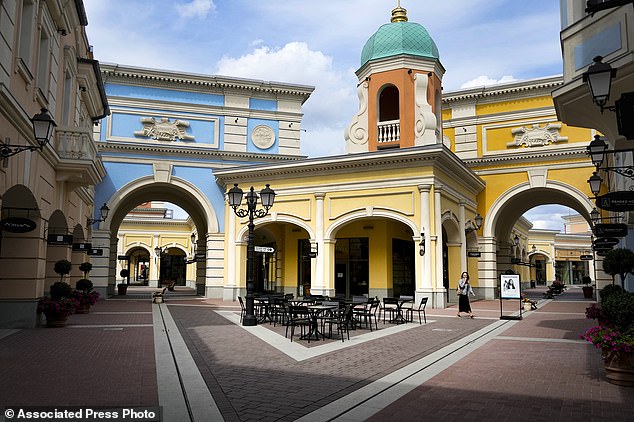 A woman walks at an almost empty shopping center with many shops closed due to sanctions. Dozens of foreign and international companies have withdrawn from the country, leaving behind half-empty malls and closed doors in places that once buzzed with customers

Other companies have also decided to stay, with some facing blowback.

HSBC has a small presence in Russia with ‘no plans to change anything at the moment’, while pharmaceutical firm AstraZeneca said its role in helping medics deliver essential care was ‘more urgent than ever’. Rival GSK said it will also stay.

Japanese fashion retailer Uniqlo will remain in Russia because its boss believes ‘clothing is a necessity of life’, while Stella Artois owner AB InBev said it will continue to operate via a local subsidiary.

And earlier in the year, French automaker Renault announced it had handed over its Russian assets to the government in Moscow, marking the first major nationalization of the economic disentanglement.

Russian authorities said they were ready to nationalize foreign assets – as happened with Renault – and some officials assured Russians that their favorite brands would have domestic alternatives.

Officials in Moscow have sought to downplay the gravity of the Western sanctions, promising that Russia will adapt and take steps to stop the flight of foreign currency and capital.