Saban appeared on SiriusXM Radio on Thursday afternoon and said he “never should have singled anybody out” when making comments about the current name, image and likeness environment in college football on Wednesday night.

“I should have never really singled anybody out. That was a mistake and I really apologize for that part of it,” Saban said.

During a lengthy answer during an event with local business leaders in Birmingham, Alabama, on Wednesday night, Saban specifically called out Texas A&M and made reference to their top-rated recruiting class in the class of 2022.

“We were second in recruiting last year. A&M was first. A&M bought every player on their team. Made a deal for name, image and likeness. We didn’t buy one player, aight? I don’t know if we’re going to be able to sustain that in the future, because more and more people are doing it. It’s tough,” Saban said.

Saban also named Jackson State and Miami basketball during his answer. On Thursday, he said his issue was more with the overall system rather than what those specific programs were doing. Saban also wondered if the current setup is “sustainable” and if it’s good for college football.

“I’m not against name, image and likeness. Our players made a lot of money last year. I told our players to get an agent, get representation and make what you can make,” Saban said. “I think the issue in college athletics in general now is the whole system of collectives and people raising money to basically pay players to come, whether it’s to come to their school or pay the players that are on their team.”

There have been multiple accusations over the past 24 hours in college football between two of the SEC’s best. @AlabamaFTBL Head Coach Nick Saban joined @JacobHester18 and @Bcarp3 to set the record straight. pic.twitter.com/V99cymfHvy

Saban: ‘I wasn’t saying anybody did anything illegal’

Fisher, who coached under Saban at LSU from 2000 to 2004, was furious with Saban and repeatedly called his former boss’ statements “despicable.” He also called Saban a “narcissist” and inferred that Saban’s track record wasn’t exactly spotless over the years.

“Some people think they are God,” Fisher said of Saban. “Go dig into how God did his deal and you may find out a lot about a lot of things you don’t want to know. We build him up to be this czar of football, go dig into his past.”

Saban claimed Thursday that he wasn’t trying to say that any of the schools he mentioned Wednesday night have done anything illegal.

“I really wasn’t saying that anybody did anything illegal in using name, image and likeness. I didn’t say that. That was something assumed by what I said. That’s not what I meant nor what I said,” Saban said. “There’s nothing illegal about this. It’s the system that allows you to do it, and that’s the issue that I have.”

In the radio interview, Saban confirmed that he tried to call Fisher but received no response. Fisher said earlier Thursday that he wouldn’t accept Saban’s call. 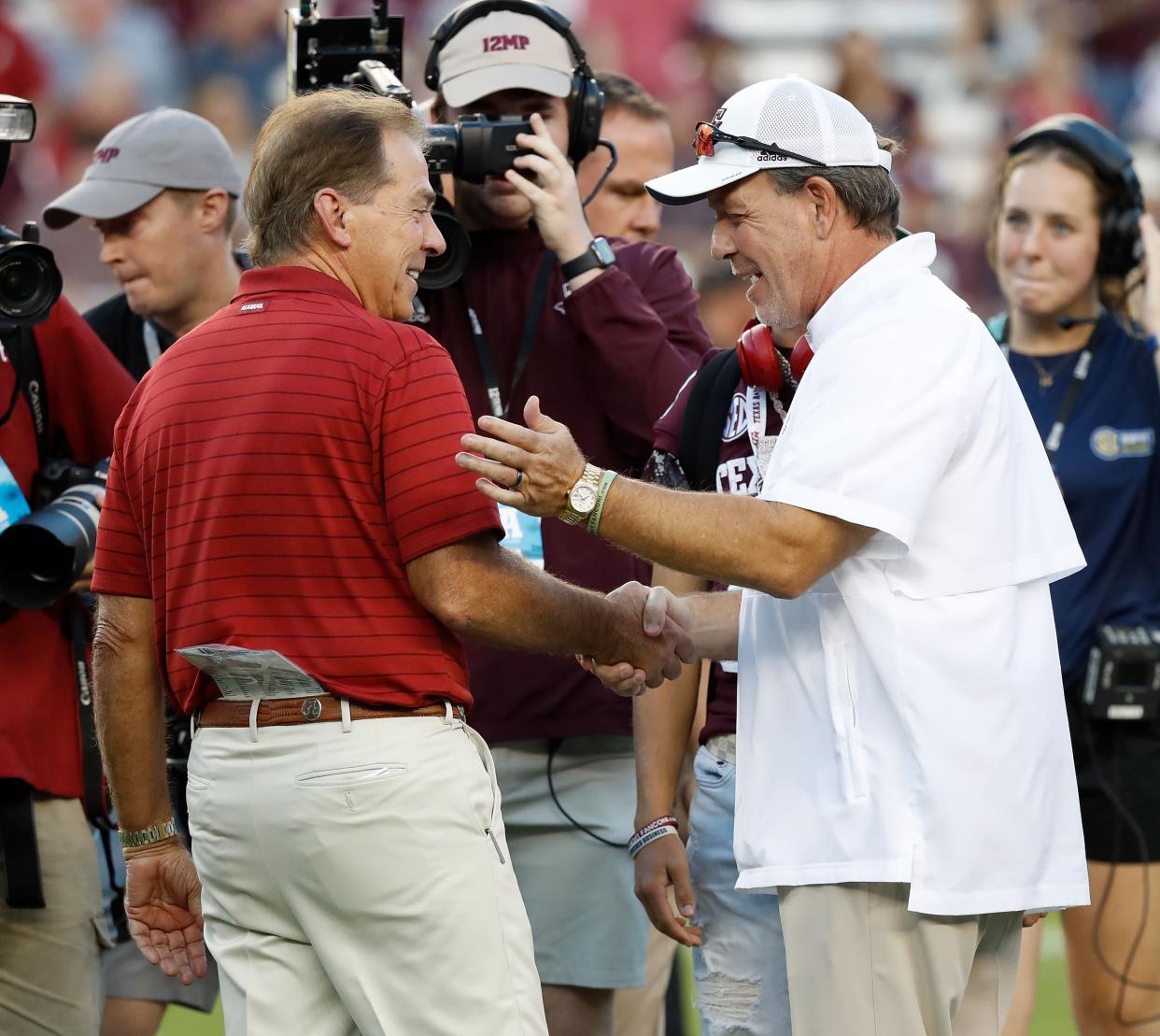 Both Saban and Fisher were reprimanded by the SEC on Thursday related to the conference’s “Ethical Conduct” policies.

“The membership of the Southeastern Conference has established expectations for conduct and sportsmanship that were not met last night nor today,” SEC commissioner Greg Sankey said. “A hallmark of the SEC is intense competition within an environment of collaboration. Public criticism of any kind does not resolve issues and creates a distraction from seeking solutions for the issues facing college athletics today.

“There is tremendous frustration concerning the absence of consistent rules from state to state related to name, image and likeness. We need to work together to find solutions and that will be our focus at the upcoming SEC Spring Meetings.”