Are hospitals REALLY creaking under the strain of Covid before Christmas? NHS data shows trusts are STILL quieter than last December – with seven times fewer wards close to being full

NHS data still shows hospitals to be quieter than they were this time last year even as coronavirus’s second wave bites and the number of Covid patients approaches levels seen in the crisis’s peak in April.

There were 15,465 people in hospital with coronavirus in England on Wednesday, December 16, compared to 18,974 on the worst day in the spring. November’s lockdown effects appear to have worn off, with admissions rising again, and another wave of deaths is likely to follow in the New Year.

But statistics suggest the health service is, overall, coping better with its workload than it did last winter.

A greater proportion of ward beds are free, intensive care units have more room and A&E departments aren’t yet turning ambulances away more often than usual – with the exception of a bad day at one NHS trust in the Midlands.

Seven times more hospitals were 95 per cent full or more in the second week of December 2019 than this year – 80 compared to 11 – and England’s average intensive care occupancy is down from 84 per cent to 75 per cent.

Some hospitals have this week announced they are postponing some non-urgent procedures like they did in the spring because of surges in Covid patients, while others say they are ‘coping’ and hope they won’t have to do so.

Doctors’ unions say they are afraid that a third wave of infections, like the one emerging in London and the South East, could be the straw that breaks the camel’s back. NHS data shows that wards are less full than they were at the same time last year, but doctors say there are invisible coronavirus pressures that don’t show through in this data 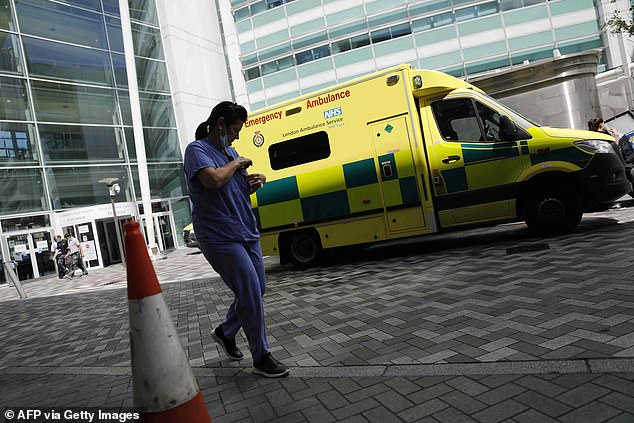 Hospitals across the country have declared major incidents in the past couple of weeks as winter strains are compounded by coronavirus, but data shows that, for the most part, the NHS has more free capacity than last year (stock image of University College Hospital, London)

The Whipps Cross and University College hospitals in London have both declared serious incidents in the past week amid surging patient numbers.

Northampton General Hospital has had to start cancelling planned procedures so it can handle the numbers of emergency patients.

And the Royal Devon and Exeter NHS Trust declared a ‘black alert’ this week as it buckled under the strain of patient numbers.

Hospitals across the country say they’re suffering as coronavirus mixes with yearly winter pressures, with the daily admissions for Covid-19 on the rise again after a brief decline during lockdown. Most recent figures show 1,581 people were admitted to hospital with the illness on Sunday, December 13.

NHS bosses say problems posed by coronavirus – segregating wards, constantly using PPE and staff having to self-isolate – is adding new levels of pressure to how hospitals work, but numbers show they are treating fewer patients than usual.

The average proportion of inpatient beds that were full across England in the week ending December 13 was 89 per cent.

This was down from 94.9 per cent full in the same week last year (ending December 15).

And although average numbers don’t reflect higher pressures in coronavirus hotspots, far fewer hospitals appear to be at maximum capacity than in a non-Covid winter.

Eleven NHS trusts had 95 per cent – or more – of their beds full last week, compared to 80 trusts during the same time last year.

Eleven trusts were a staggering 99 per cent full last year, but none were up to December 13 this year.

‘We are very busy, but at the moment we’re coping,’ said Richard Mitchell, director of Sherwood Forest Hospitals in Nottinghamshire, where wards were 89 per cent full in the most recent week.

He told BBC Radio 4 this morning: ‘In the three hospitals I work in we have around 100 patients with Covid… which is similar to the peak earlier in the year, and we’re experiencing normal winter emergency care.

‘Intensive care is busy and obviously colleagues across our hospitals and the NHS and the local authorities are tired and working under huge pressure, but we’re not in a position where we’ve been cancelling treatments. We hope we won’t have to cancel treatments this winter.’

A&E departments have been turning away ambulances in some parts of the country but, overall, this does not yet seem to be a worse problem than in 2019.

A total of 44 ambulances were diverted elsewhere in the week to December 13, compared to 24 in the same week last year.

The difference of 20, however, is entirely accounted for by one hospital trust on one day. The Dudley Group in the West Midlands diverted 20 ambulances on December 11, with no diverts at all before or after that date.

If Dudley’s bad day was excluded the number of diverted ambulances would be exactly the same as it was this time last year.

Experts have said all year that the UK must learn to live with coronavirus because it may never fully go away, and have raised concerns that the NHS is being treated with kid gloves.

They said the Government’s ‘Save the NHS’ mantra – which was necessary during the first wave because nobody had any idea how many people were infected – may be getting over-used.

Dr Karol Sikora, a consultant oncologist and professor of medicine at the University of Buckingham, told MailOnline in November that Downing Street had run a ‘brainwashing PR campaign’.

He said: ‘We’ve gone back to how it started in March, with [the Government] claiming we need the measures to protect the NHS.

‘What the data shows is that hospitals are not working at full capacity and they’ve still got some spare beds for Covid if necessary.

‘The public is being misled, the data doesn’t stack up. Fear and scaremongering is being used to keep people out of hospital.’

Although data don’t seem to show that the NHS is struggling more as a result of the Covid-19 crisis, they don’t give the whole picture.

An NHS spokesperson told MailOnline in November: ‘The pandemic has changed the way the NHS delivers care, with hospitals having to split services into Covid and non-Covid zones to protect patients in a way that was not necessary less than a year ago, meaning some beds cannot be used due to enhanced Infection Prevention and Control measures.

‘This means that trying to compare current occupancy figures with those from before the pandemic is like comparing apples and pears and does not reflect the very real pressures that hospitals are seeing due to rising numbers of patients with Covid-19, which is why it’s so important we all continue to follow the government guidelines and help stop the spread of the virus.’

The NHS adds: ‘In general hospitals will experience capacity pressures at lower overall occupancy rates than would previously have been the case.’

Ganesh Suntharalingam, an NHS doctor and former president of the Intensive Care Society, said on Radio 4 today: ‘When you look at an intensive care unit now it may not be 100 per cent full of Covid in the way that some units were earlier in the year but, actually, it can be equally busy or busier in many parts of the country with a mix of Covid and non-Covid illnesses.’

He said doctors were looking at the near future with ‘alarm’ as coronavirus cases continue to rise, but added: ‘People will get the care they need – as always happens – but the impact on Covid patients may be that to get the intensive care they need they may end up being transferred between hospitals… the impact on non-Covid patients is that some elective services may be postponed or delayed.’

At the peak of the crisis in spring, doctors had to be selective about who they admitted to hospital because there were so many critically ill patients and the NHS was short on equipment such as ventilators and personal protective equipment.

Dr Nick Scriven, chair of the Society for Acute Medicine, said today: ‘We have found that in-hospital length of stay has for some doubled over the last six to nine months and the major stress is occurring due to a lack of flow though hospital wards and back to the community…

‘I suspect many, many trusts have cancelled activity of some sort, whether it be routine clinics or procedures, to try to free up staff to help out but much of this will be ‘under the radar’ and maybe not seen in statistics yet.

‘Although Health Secretary Matt Hancock said yesterday that hospitals are less full than this week last year, I suspect he does not understand the reality of juggling bed spaces in the Covid era to keep patients safe and minimise in-hospital spread.’