The Australian Security Intelligence Organisation has made a smart decision to curb its use of labels and categories when referring to threats of terrorism.

The routine approach of describing broad notions of terrorism in categories such as “extremist right” or “extremist left” on the political spectrum, or extremist “Islamic” or “Christian” or whatever, has essentially narrowed the public’s perception of what constitutes terrorism. 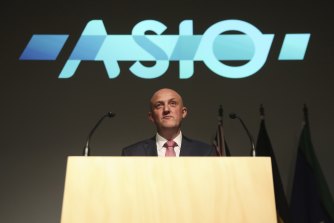 It has caused Australians to look for threats only from certain segments of the population, and it has inculcated unnecessary hyper-vigilance or unreasonable anxiety about certain religions and ethnic communities.

By broadening the terminology at first instance, ASIO is hoping to keep the public alert to the unpredictable nature and range of terrorism. From now, when speaking in general terms, ASIO will talk about “ideologically-motivated” or “religiously-motivated” threats.

This is intended to help emphasise that terrorism threats are real, ever-present, and that they emanate from a wide range of extremist ideologies, from activist or sleeper organisations, small suburban groups or lone wolves.

Under Commonwealth statute, any act or threat of violence that is done to intimidate the public, to coerce or influence the government, and which is done to advance a political, religious or ideological cause, is classed as terrorism.

But as ASIO’s director-general Mike Burgess noted last week, terrorism threats are coming from all sorts of organisations or individuals that have nothing to do with the traditional prisms through which we view political, religious or philosophical activism.

Potential terrorists might come from the left, the right or the in-between on the political spectrum. They might be religious zealots, racists or end-of-the-world isolationists.

But they might also be small groups angry at government decisions that affect their industry or their region. Or disaffected litigants who wanted to destroy judicial institutions. Or, under the ASIO Act, they might be anyone who takes hostages on an aircraft, a ship or an offshore oil or gas platform.

With the emergence of the global pandemic last year came a torrent of bizarre conspiracy theories about the virus, as well as reprehensible violence and falsehoods directed to certain races of people, and false narratives about the imminent collapse of society.

All this helped fortify extreme ideologues and, as a result, counter-terrorism agencies are reportedly witnessing an accumulation of weaponry and ammunition by fundamentalists. These individuals might not be right, left or in any way religious; they are extremists of an entirely different kind.

About 40 per cent of ASIO’s priority counter-terrorism work is focused on threats deriving from right-wing zealots. The balance of the workload, overwhelmingly, relates to Islamist extremists.

ASIO’s decision to neutralise the language around terrorism is not, as some critics contend, a foolish “fiddling with labels” that denies the public the right to the truth.

To the contrary. Labelling terrorism in the traditional manner is like seeking to describe the world in black and white, without nuance and with far too much focus on one aspect over another.

As well, a broad style of terminology is already being used by some of Australia’s partners in the so-called Five Eyes alliance. Canada and New Zealand have adopted similar language; the United States refers simply to “domestic terrorism” when it is on its home soil.

While ASIO’s new terrorism descriptors are for overarching use only, it is imperative that the agency does not shirk from providing genuine detail when and if specific threats occur.

To be clear: clear information is essential to the public and ASIO must not attempt to disguise what brand of terrorism is at play, whether it be Islamist threats, fascists, environmental ideologues or anything else.

Nor should ASIO underplay the threats. It must never shy from properly and thoroughly describing what is out there. The nation cannot risk having a counter-terrorism agency that goes too soft and ends up short-circuiting its important communication channels.

The more information the public has to work with, the better. To that end, Mr Burgess’s strategy to be more open about ASIO’s work is welcome.