The Fab Four’s early years: New book shows a young John, Paul, George and Ringo singing, playing guitar and the harmonica, taking a tea break, and joking around at Abbey Road Studios in 1963

He was already a famous fashion photographer. They were on the cusp of causing international frenzied fandom.

On September 12, 1963, Norman Parkinson photographed the Fab Four as they recorded songs at Abbey Road Studios. The photos show a young John, Paul, George and Ringo singing, playing guitar and the harmonica, taking a tea break, and joking around. Initially published that year, his photos are now part of new book, ‘The Beatles: London, 1963.’

The band’s debut single ‘Love Me Do,’ was released in the United Kingdom in October 1962 and hit number 17 on the charts. It started to turn the ‘virtual unknowns outside their native Liverpool’ – John Lennon, Paul McCartney, George Harrison and Ringo Starr – into pop stars, Pat Gilbert, a journalist and author, explained in the book.

Their debut album, ‘Please Please Me,’ was released in March 1963 and while The Beatles were on tour that year, there were inklings of the ‘hysterical screaming’ that would characterize the forthcoming Beatlemania, Gilbert wrote.

‘The band’s boys-next-door charm and bright, upbeat harmony pop seemed to touch a nerve in a country (England) emerging from years of grey, post-war austerity – as did the novel appeal of their strange mop-top haircuts and odd-shaped instruments,’ he wrote.

‘By the end of the tour, groups of teenage girls were besieging stage doors, demanding autographs and kisses from the band.’ 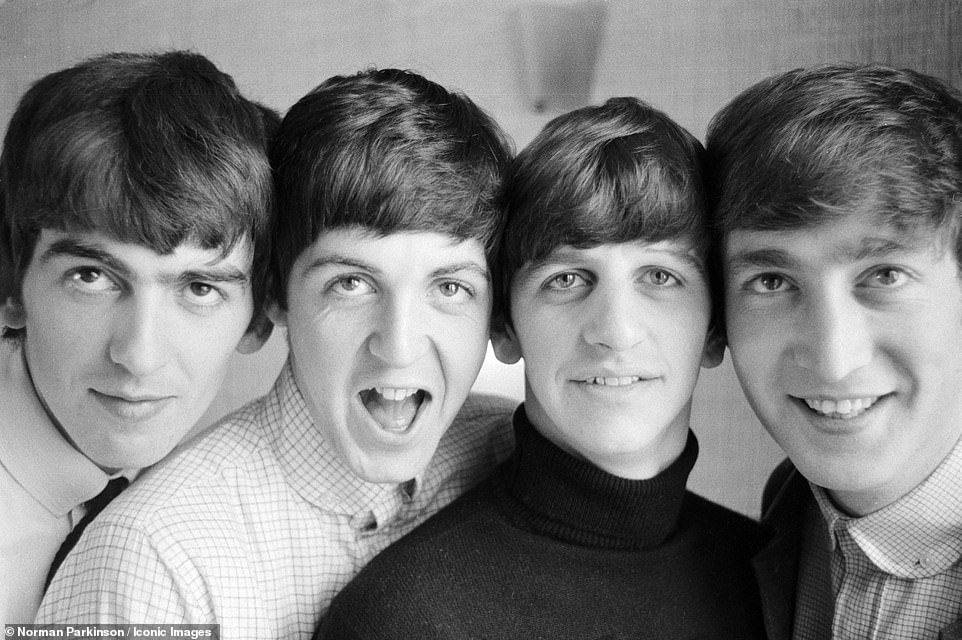 George Harrison, Paul McCartney, Ringo Starr and John Lennon released their debut album, ‘Please Please Me,’ in March 1963, and are pictured here later that year, in September, at the President Hotel in London. These photos, which were published in a magazine called ‘Queen’ in 1963, are now part of a new book, ‘The Beatles: London, 1963′ 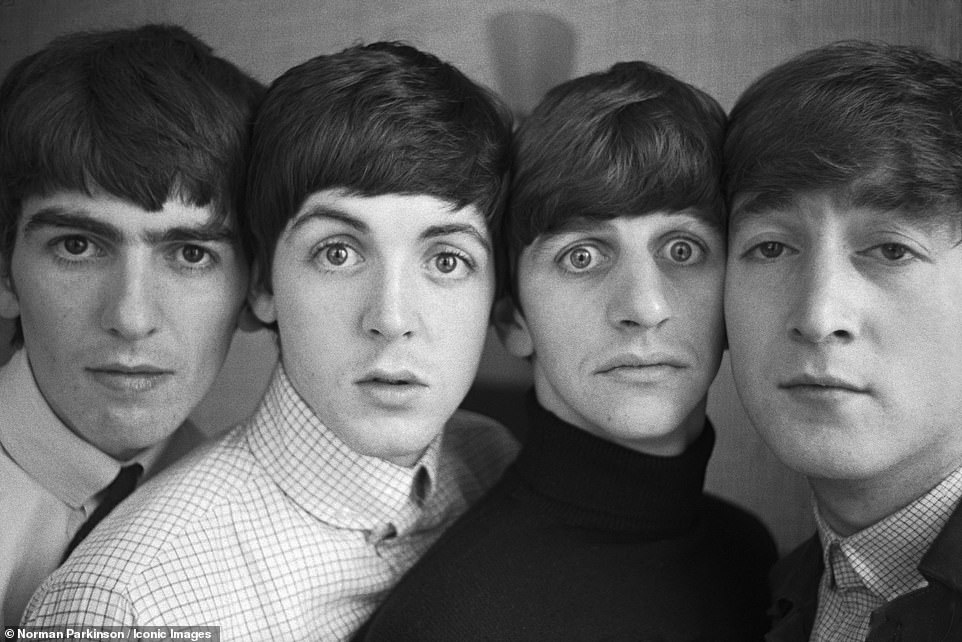 Despite the fact that The Beatles had notched their first number 1 single with ‘From Me To You’ in May, and their album ‘Please Please Me’ was doing well on the charts, the band members still shared rooms when they stayed at the President Hotel, where this photo was taken in 1963 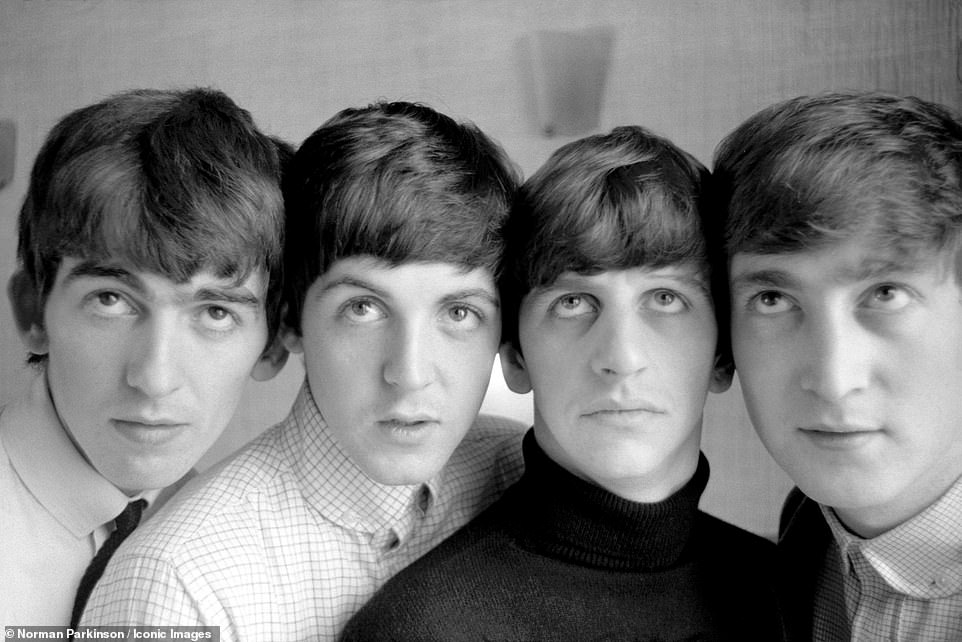 ‘We would book two twin-bedded rooms for the group,’ Tony Bramwell, a touring aide, recounted in a new book, ‘The Beatles: London, 1963.’ ‘John-Paul and George-Ringo were the usual pairings. They liked staying at the President because there were Turkish baths in Russell Square (in London). That kind of thing was still new and entertaining for them’ 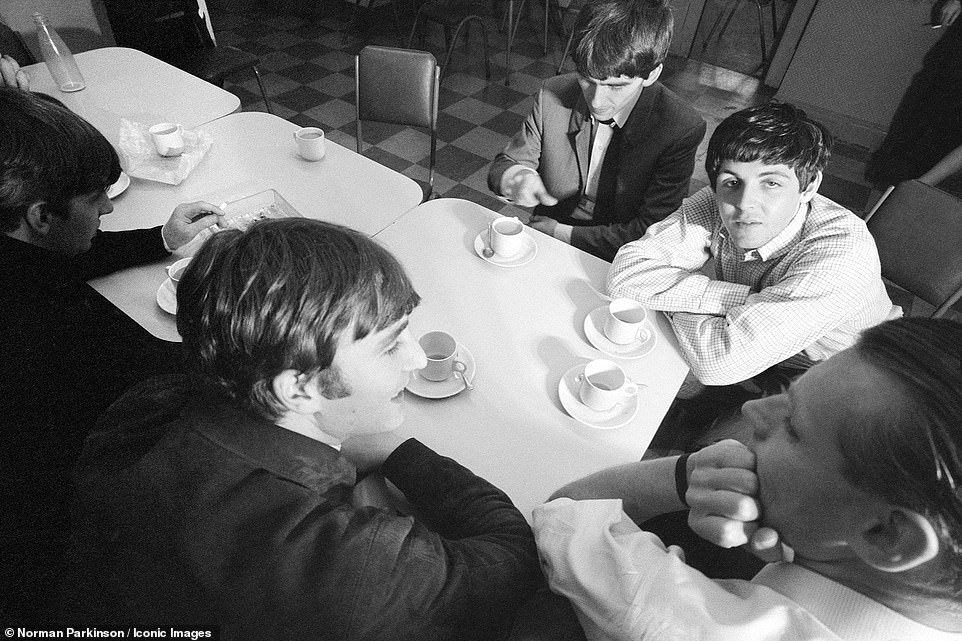 British photographer Norman Parkinson took this image while the band was on a tea break from recording songs at Abbey Road Studios in London on September 12, 1963. From left, Ringo Starr, John Lennon, George Martin, who produced many of the band’s records and has been referred to as the ‘fifth Beatle,’ Paul McCartney and George Harrison 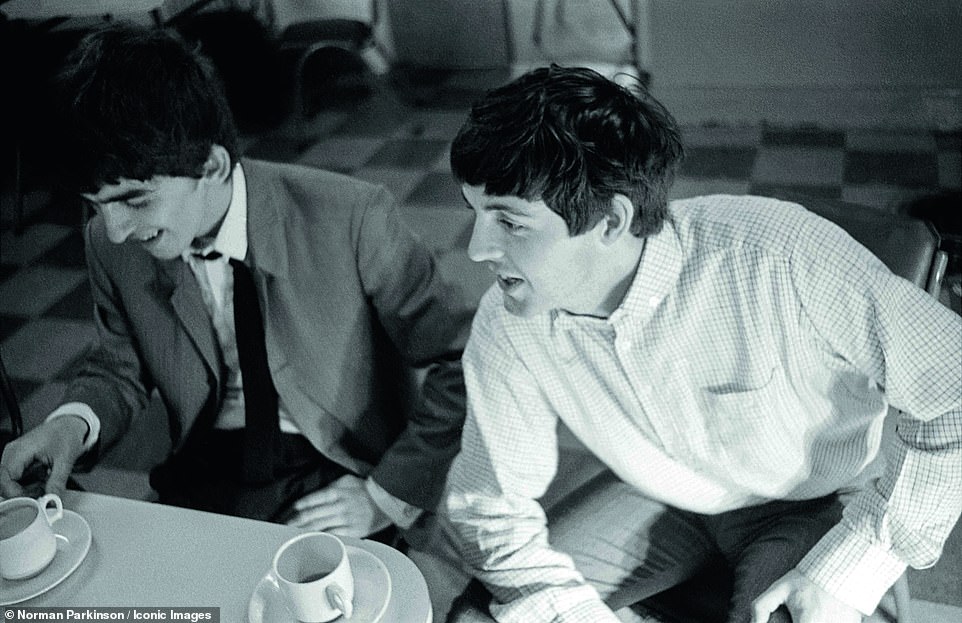 Parkinson, who died in 1990, was a well-known fashion and portrait photographer when he snapped these images of The Beatles in September 1963. He left ‘Vogue’ in 1959 and joined ‘Queen,’ a society magazine that had been recently relaunched. In the above photo Parkinson took Paul McCartney, right, is with his bandmate George Harrison, left, on a break from recording

The society magazine ‘was perfectly poised for the advent of the ’60s,’ Gilbert wrote. An associate editor at ‘Queen’ had set up the assignment for Parkinson, who planned to shoot the band at a hotel and then while they worked at Abbey Road Studios, according to the book.

Despite the fact that The Beatles had notched their first number 1 single with ‘From Me To You’ on May 4, and their album ‘Please Please Me’ was doing well on the charts, the members still shared rooms at the President Hotel the night before.

‘We would book two twin-bedded rooms for the group,’ Tony Bramwell, a touring aide, recounted in the book. ‘John-Paul and George-Ringo were the usual pairings. They liked staying at the President because there were Turkish baths in Russell Square. That kind of thing was still new and entertaining for them.’

Parkinson photographed the group at the hotel and then at the studio. Fans were waiting for The Beatles at Abbey Road.

After recording messages for radio, the band started working on McCartney’s song, ‘Hold Me Tight,’ which they had attempted before at a session earlier that year. After 10 takes, the group had what they needed to make a final version, which would appear on the group’s second album, ‘With The Beatles,’ Gilbert explained in the book.

Parkinson arrived at the studio while the group were taking a tea break at around 6:30pm, and only had black-and-white film with him as the shops had closed for the day, according to the recently released book, published by ACC Art Books. 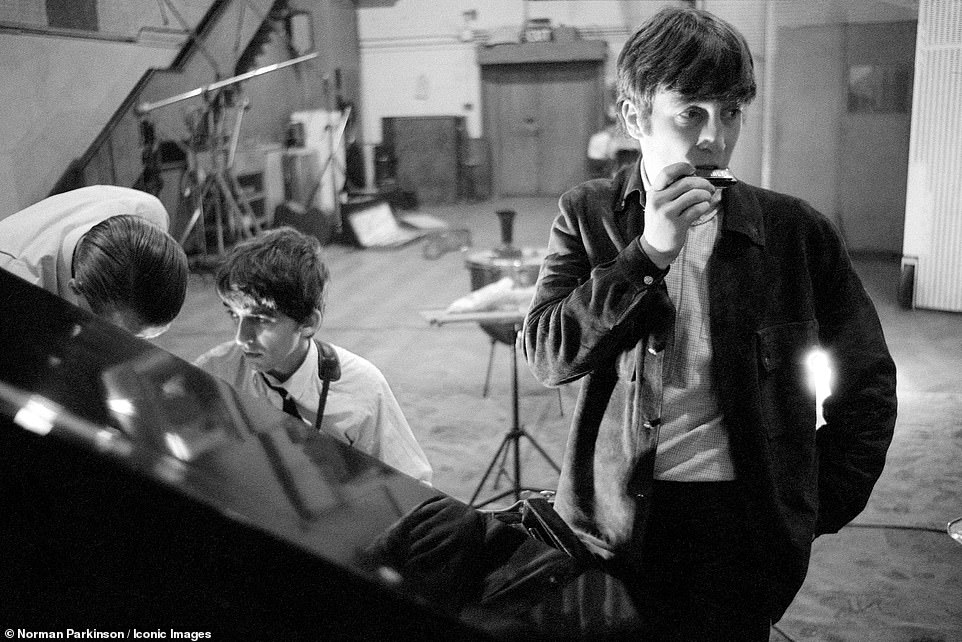 Parkinson photographed The Beatles at their hotel and then at Abbey Road Studios. The band was working on songs for their second album, ‘With The Beatles.’ Above, George Martin, left, who was the producer on many of the band’s records, talks with George Harrison, center, with John Lennon, right 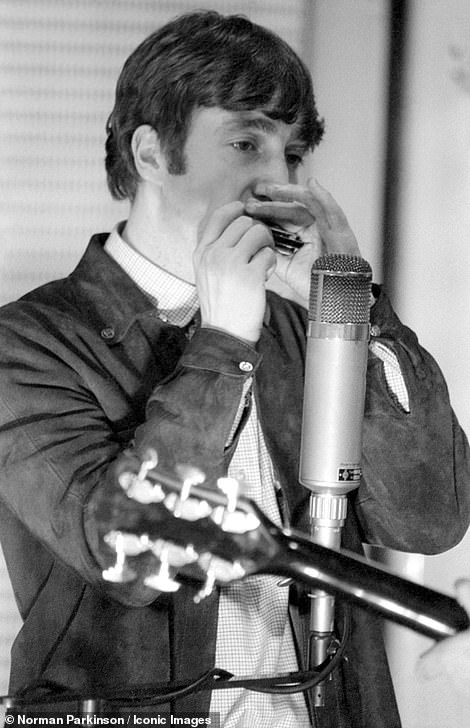 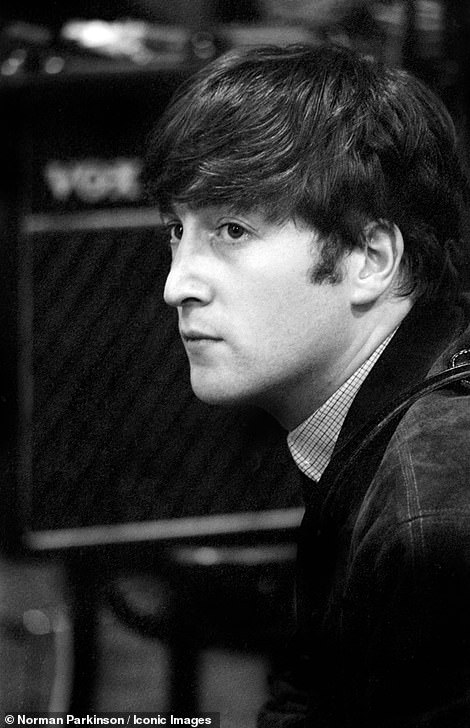 John Lennon, pictured here, plays the harmonica, left, and, right, is at Abbey Road Studios in London on September 12, 1963. The band were working on songs, such as ‘Don’t Bother Me’ and ‘Hold Me Tight,’ which were part of their second album, ‘With The Beatles’ 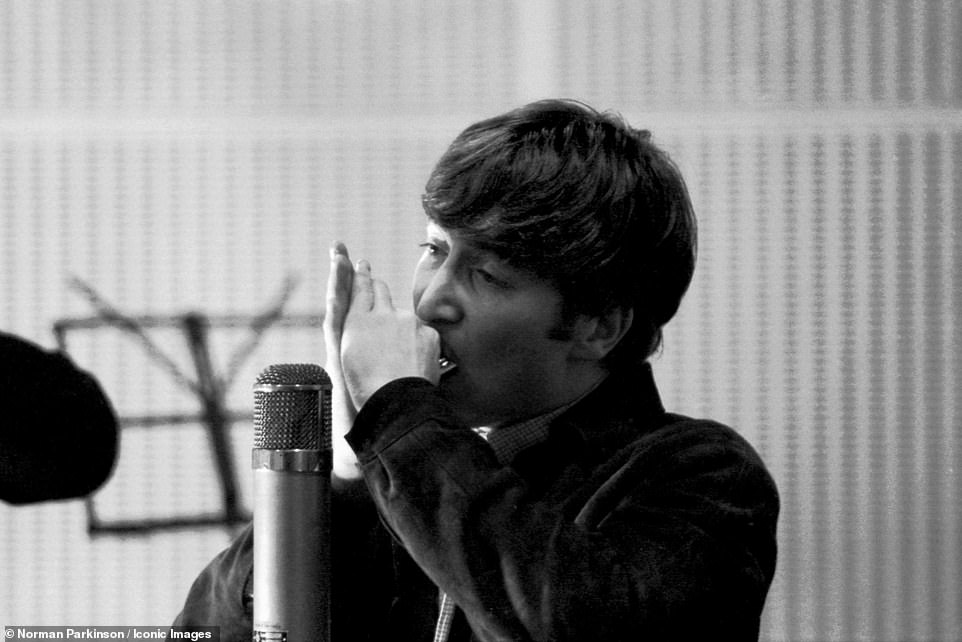 John Lennon, pictured, plays harmonica at the studio while famous fashion photographer Norman Parkinson snapped the band in 1963 – the year they had released their debut album, ‘Please Please Me.’ Parkinson was on assignment for a magazine called ‘Queen,’ which published the images that year. The photos are now part of a new book, ‘The Beatles: London, 1963’ 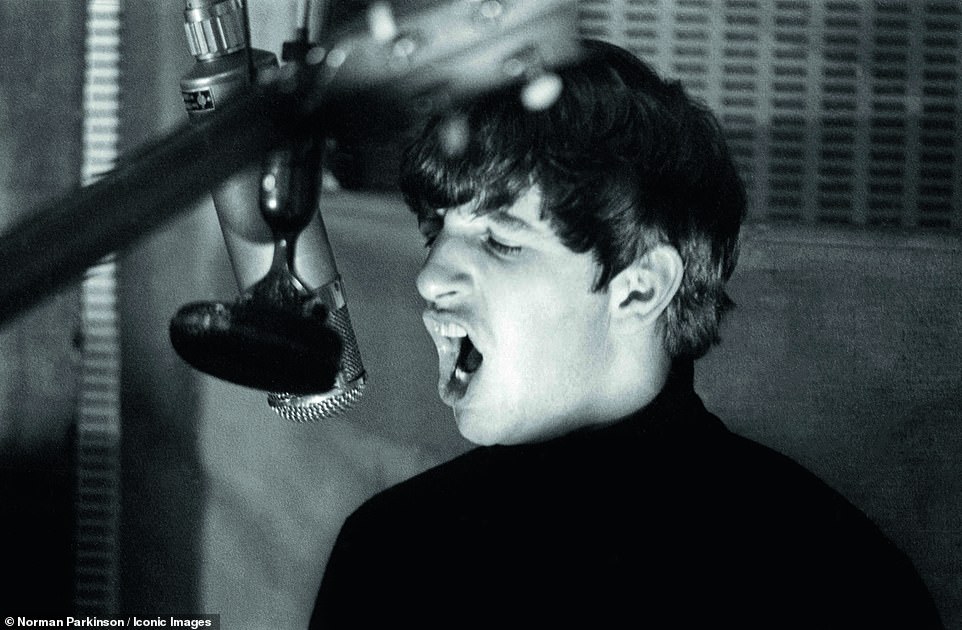 Ringo Starr, pictured, is belting out a song at Abbey Road Studios on September 12, 1963 while the group was recording songs for their second album ‘With The Beatles’

After getting back to work, the group started recording takes of Harrison’s song ‘Don’t Bother Me,’ while Parkinson snapped them. Parkinson used the light that was available in the studio from its ceilings and lamps, and only specially lit shots of The Beatles reading the Financial Times, Gilbert wrote.

The band did 10 takes of ‘Don’t Bother Me,’ and for an overdub of the song, Harrison ‘sang a second vocal and the rest of The Beatles added percussion on instruments from the studio’s store, McCartney playing a shaker, Starr an Arabian bongo and Lennon a tambourine,’ he wrote.

Parkinson was known for wearing a Kashmiri wedding cap, and there are images where Lennon and McCartney sport it jokingly. The photographer invited his son, Simon, then aged 18, to the studio to meet The Beatles, according to the book.

‘The atmosphere there was laid back: just four young phenomenally talented lads from Liverpool having a lot of fun. But, and this is a big ‘but,’ they were under the watchful care of that supreme Svengali, George Martin,’ Simon Parkinson recounted in the book. ‘He seemed to be everywhere.’

George Martin was the producer on many of the band’s records, and has been referred to as the ‘fifth Beatle.’

After ‘Don’t Bother Me,’ Parkinson photographed the band with Martin at the basement canteen at Abbey Road. After the break for the tea, the band was at it again, finishing ‘I Wanna Be Your Man,’ and the recording session ended up at around 11pm, according to the book.

‘My father really enjoyed working with The Beatles, (recognizing) their enormous talent,’ Simon Parkinson said in the book. Norman Parkinson died in 1990.

The photos he took that September day first appeared in ‘Queen,’ the magazine, and then for ‘The Beatles Book,’ a 40-page glossy magazine published in early 1964. Journalist Maureen Cleave provided the text for the glossy, and in 1966 she would interview Lennon when he said the group was ‘more popular than Jesus now.’

Not long after that September photo shoot, The Beatles earned their second number 1 hit with ‘Love Me Do,’ and Beatlemania was born. The group headed to America in February 1964, and ‘I want hold your hand’ was a hit. 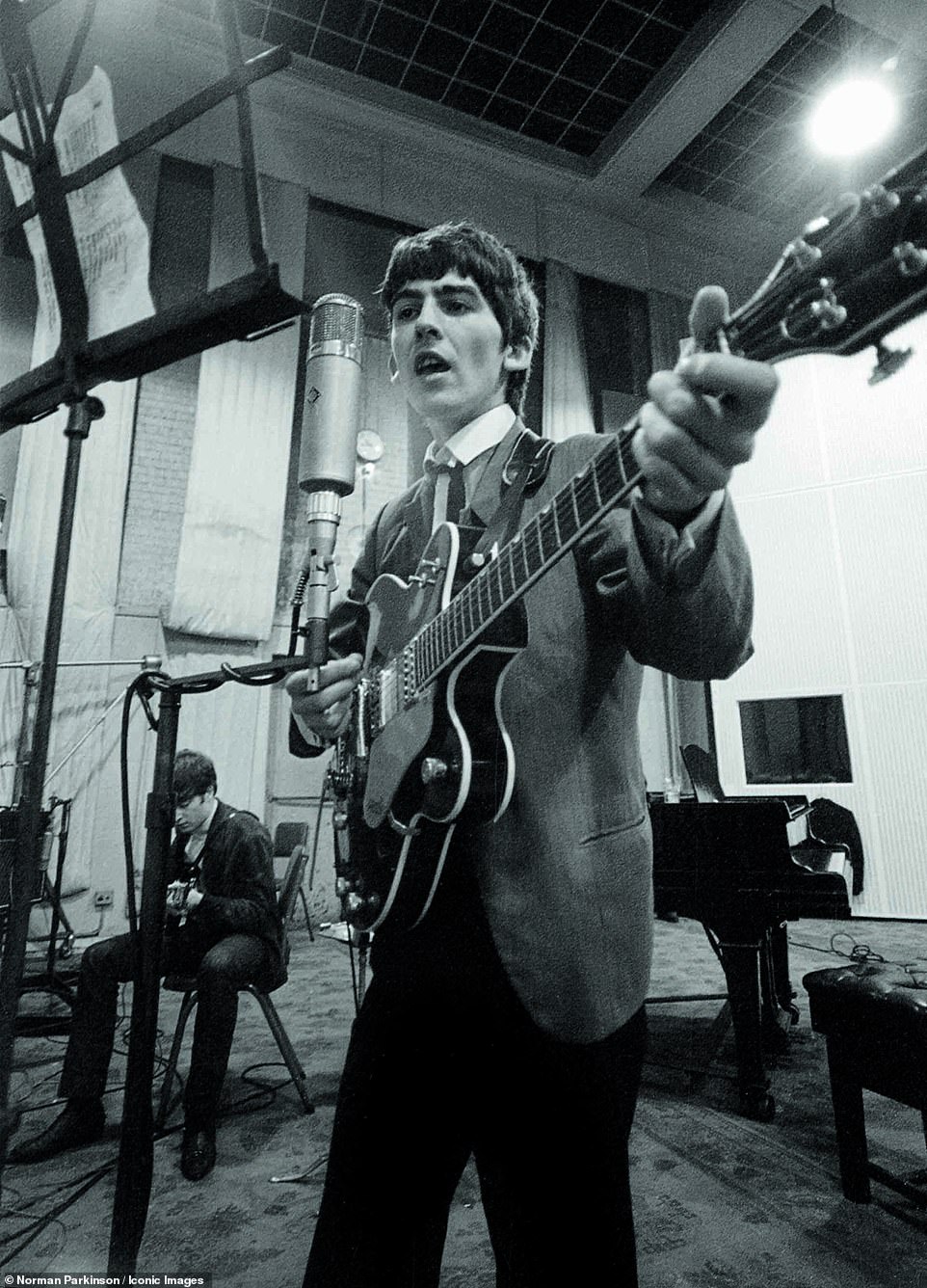 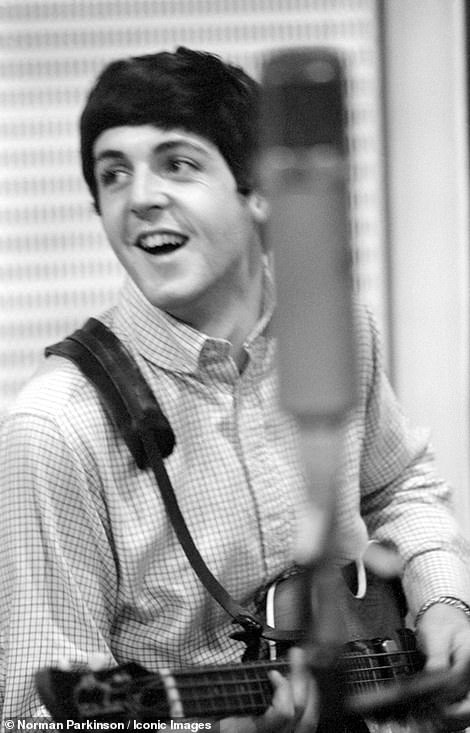 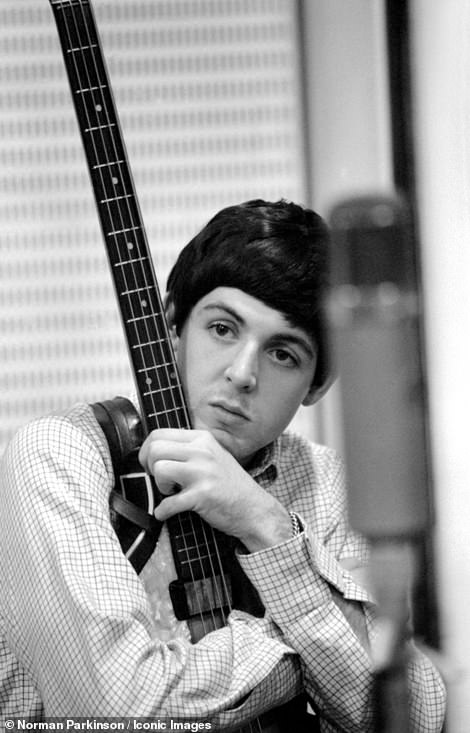 Paul McCartney, pictured here, plays guitar, left, and, right, is at Abbey Road Studios in London on September 12, 1963. The Beatles were recording songs for their second album and famous fashion photographer Norman Parkinson was on hand, snapping images 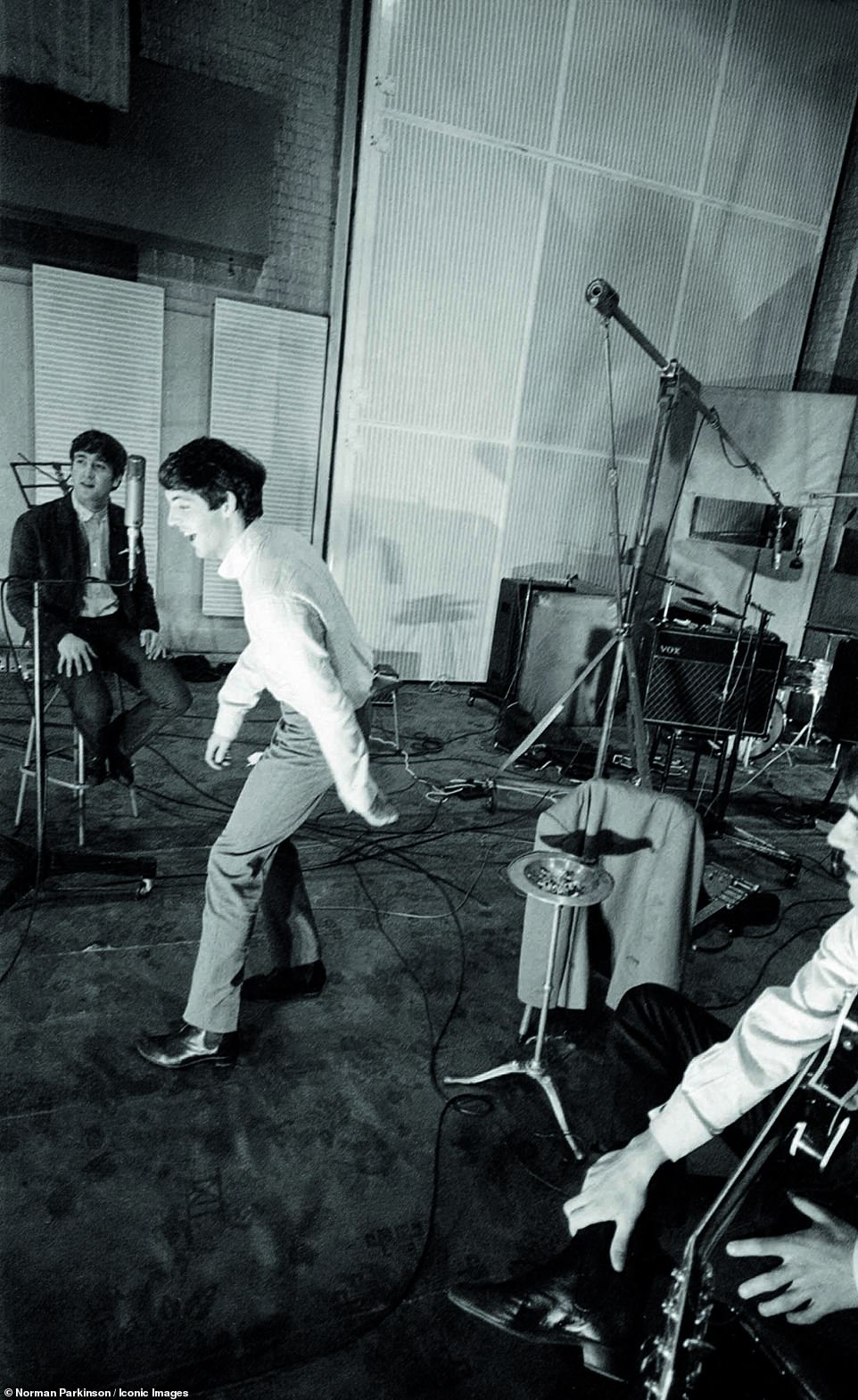 A moment of levity for the band while recording songs for their second album, ‘With The Beatles,’ at Abbey Road Studios on September 12, 1963. The images like the one above is part of new book, ‘The Beatles: London, 1963′