Gomorrah is razed to the ground: Notorious Naples housing estate where feuding drug gangs and blood-soaked violence inspired hit movie and TV series is torn down

Bulldozers started work on Thursday demolishing a crime-riddled, crumbling housing estate on the outskirts of Naples, notorious for its links to the local mafia.

Mechanical diggers ripped into the facade of one of the concrete tower blocks, shaped like a gigantic sailboat, in the Scampia neighbourhood that was a nerve centre of Italy’s illegal drug trade and inspired the 2014 hit TV series ‘Gomorrah’.

The housing project, known as the ‘Sails of Scampia’, was built in the 1960s and 1970s and became synonymous with poverty and violence in Italy’s underdeveloped south as clan warfare raged through its narrow corridors and bleak stairways.

Bulldozers began tearing down the last of a Naples housing estate that became infamous for poverty, crime and its links to the Camorra crime family on Friday 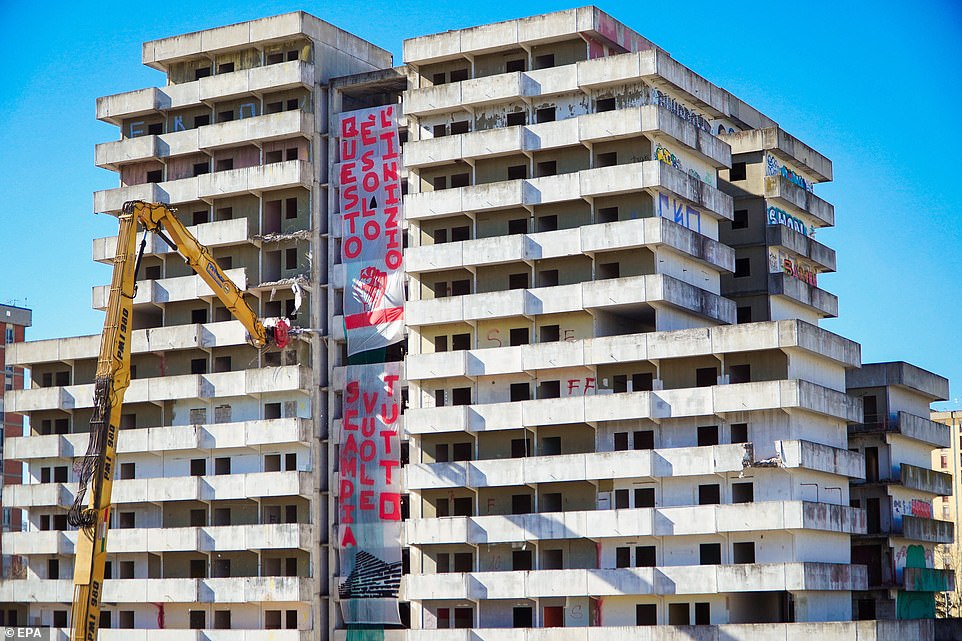 Cranes get to work on tearing down one of three tower blocks set to be demolished under plans to revive the area, next to a banner which reads: ‘This is just the beginning, Scampia (the name of the area) wants everything’ 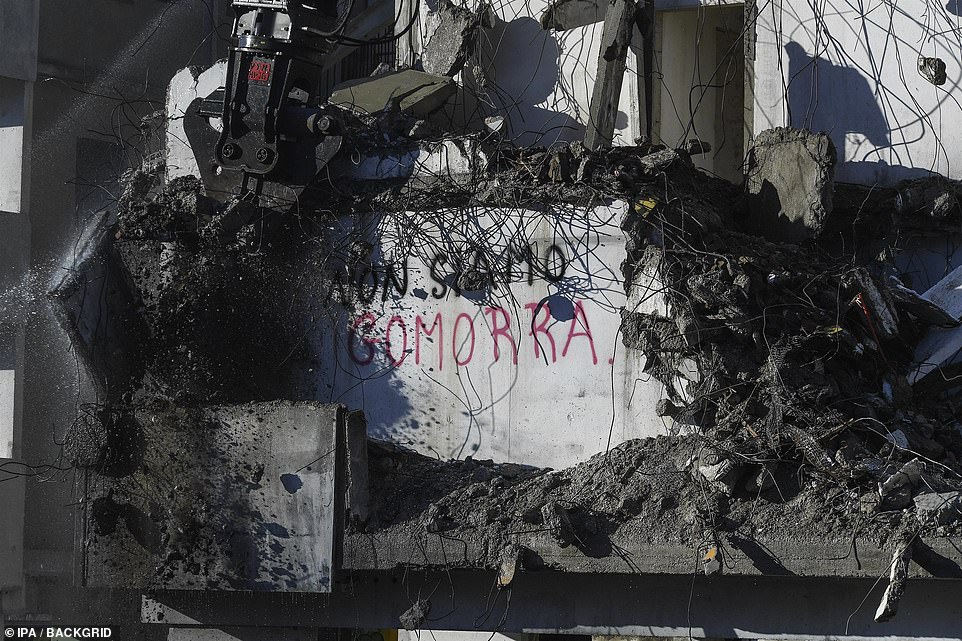 The estate was so notorious that it inspired a book, a film and a TV series called Gomorrah, named after the Biblical city that was destroyed in divine retribution because of the sins of its inhabitants 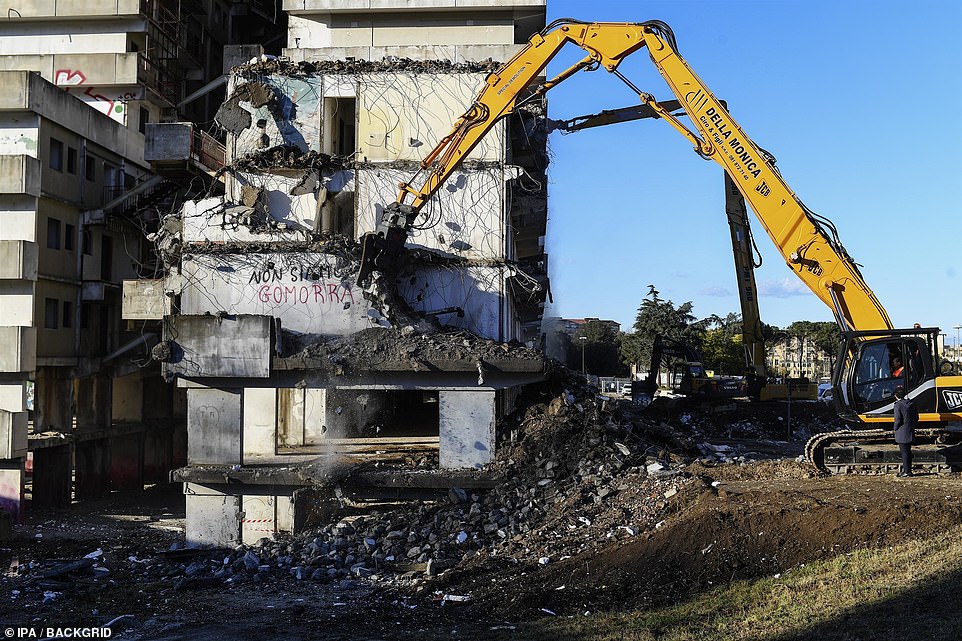 Three of the original tower blocks – known locally as the ‘sails of Scampia’ because of their triangular shape – were destroyed 20 years ago, and now another three will be demolished leaving just one for posterity which will be turned into offices 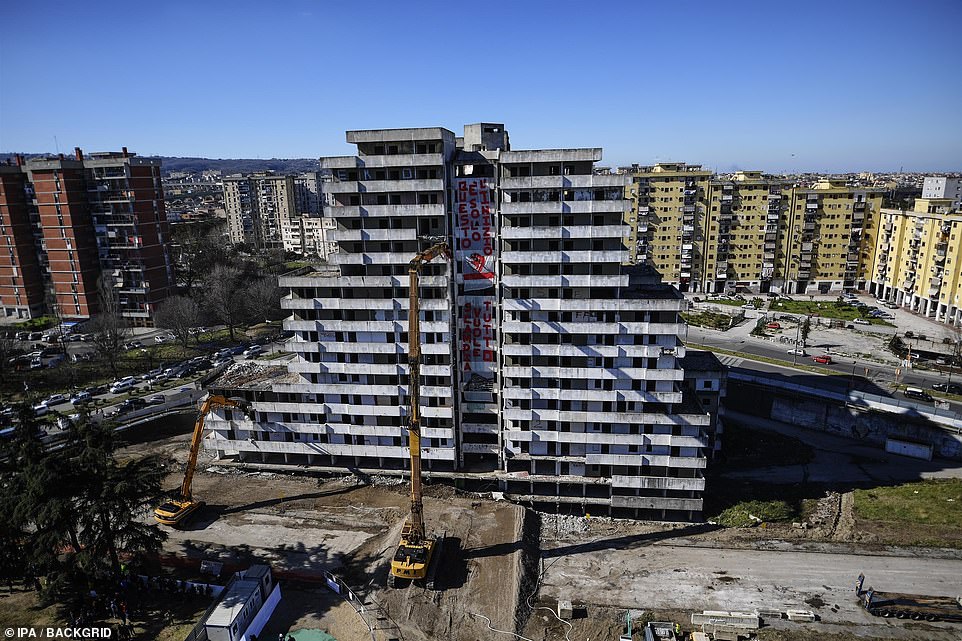 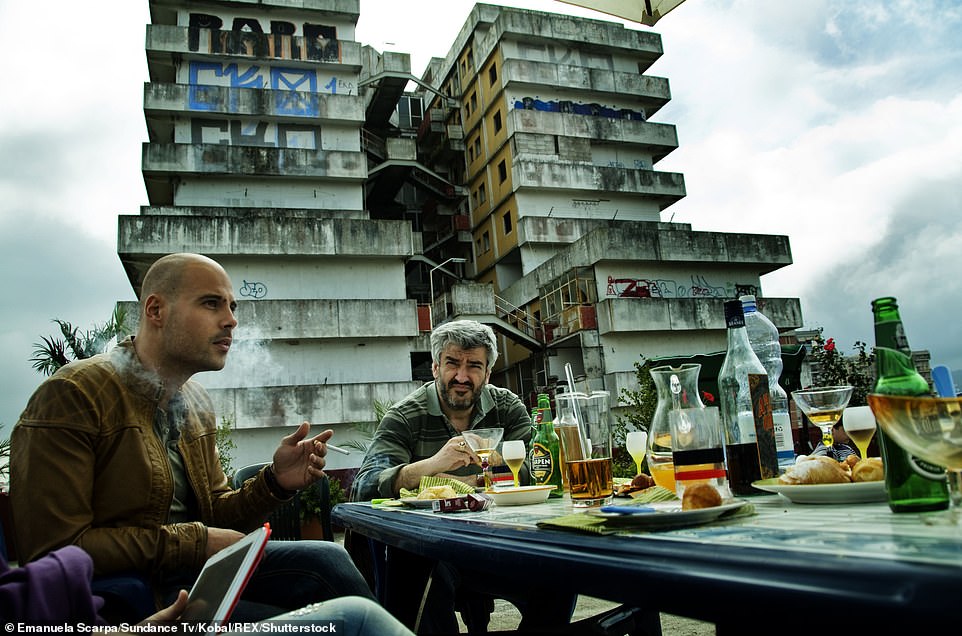 A scene from the first episode of the TV series Gomorrah, which was filmed on location in the tower blocks. The TV series was based on a book of the same name, which also inspired a 2008 film

‘Hopefully we will now be given a future, we always want things to improve for our children,’ said Vincenzo Montagna, who has lived in the area for 40 years. ‘We want to work here in Scampia, 80% of us are honest,’ he said.

Looking to highlight the plight of the isolated suburb, Pope Francis visited the area in 2015, urging the Naples mafia, the Camorra, to ‘convert to love and justice and return to honesty.’

Three of the original towers were torn down almost 20 years ago, leaving four structures intact. City authorities have now decided to raze three more blocks, leaving just one, for posterity, which will be turned into public offices.

But not everyone was happy to see the brutalist buildings ripped down.

‘I am really sad,’ said Vittoria Esposito, who teaches in a local school. ‘The kids see the Sails as people. It is like they are losing an old friend. They are aware of the problems … but they see this as a funeral.’ 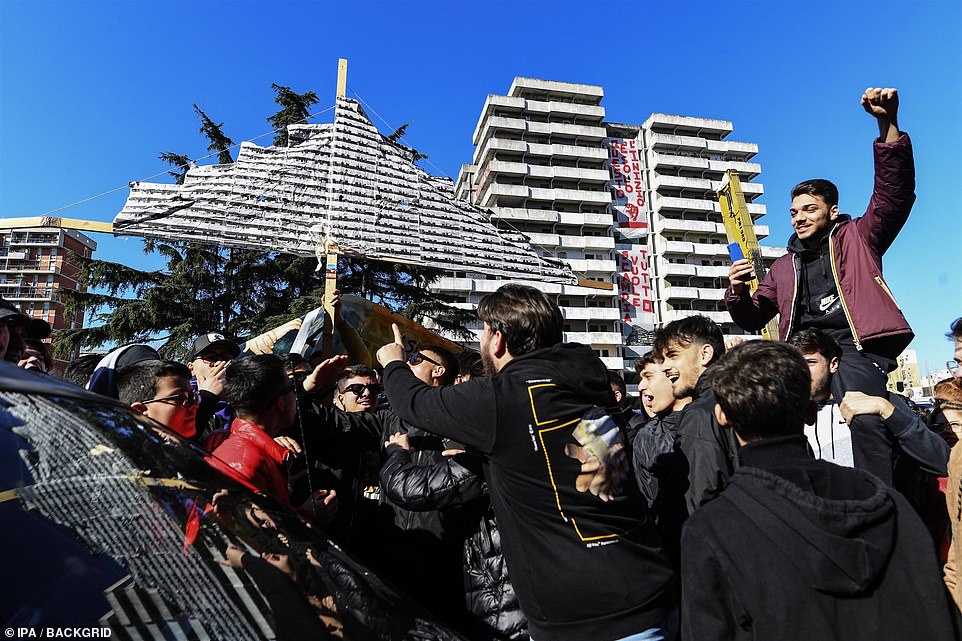 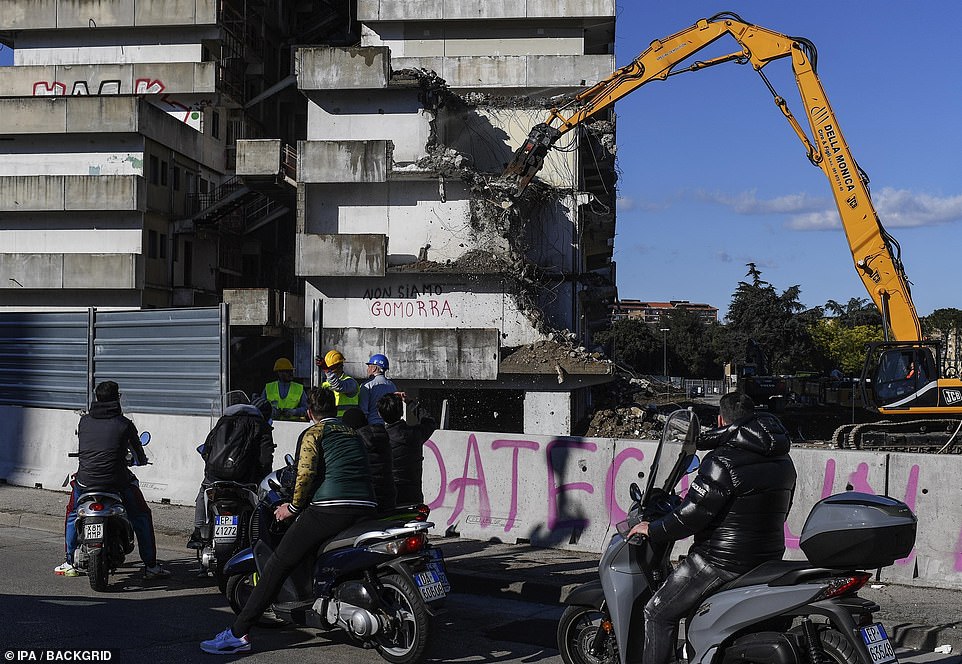 Graffiti reading ‘we are not Gomorrah’, in reference to the Biblical city that was destroyed in divine retribution for sin, is seen on the side of the tower block as it is torn down 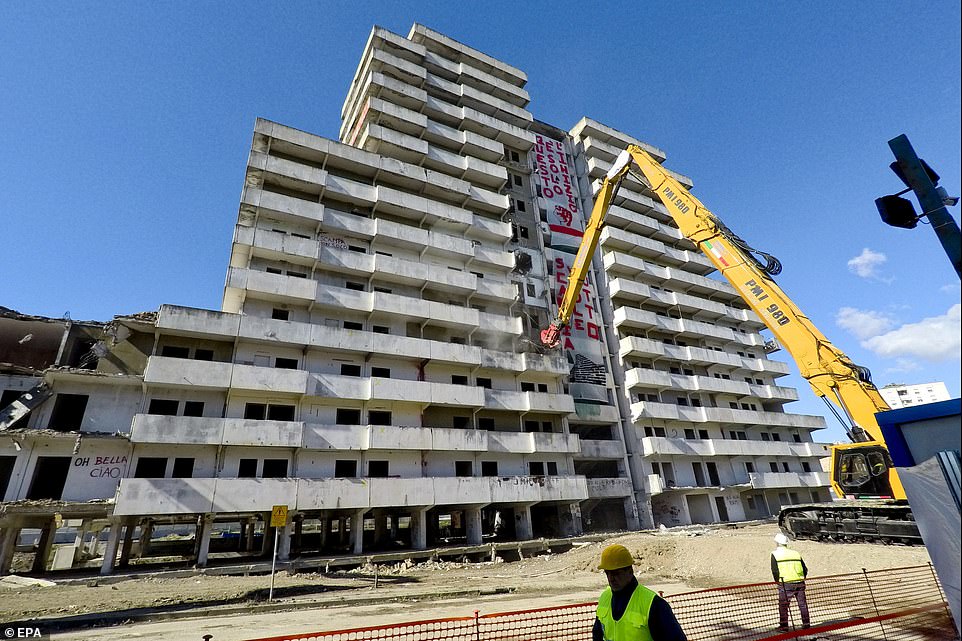 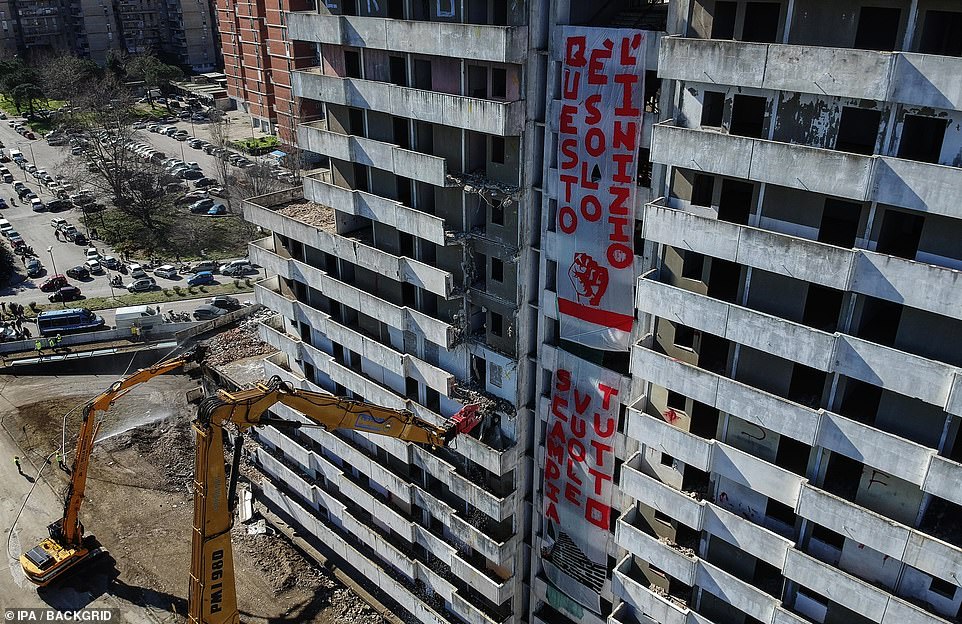 While most people support the demolition of the tower blocks, others said that they will miss the sight of the iconic buildings, which have appeared in a film and TV show 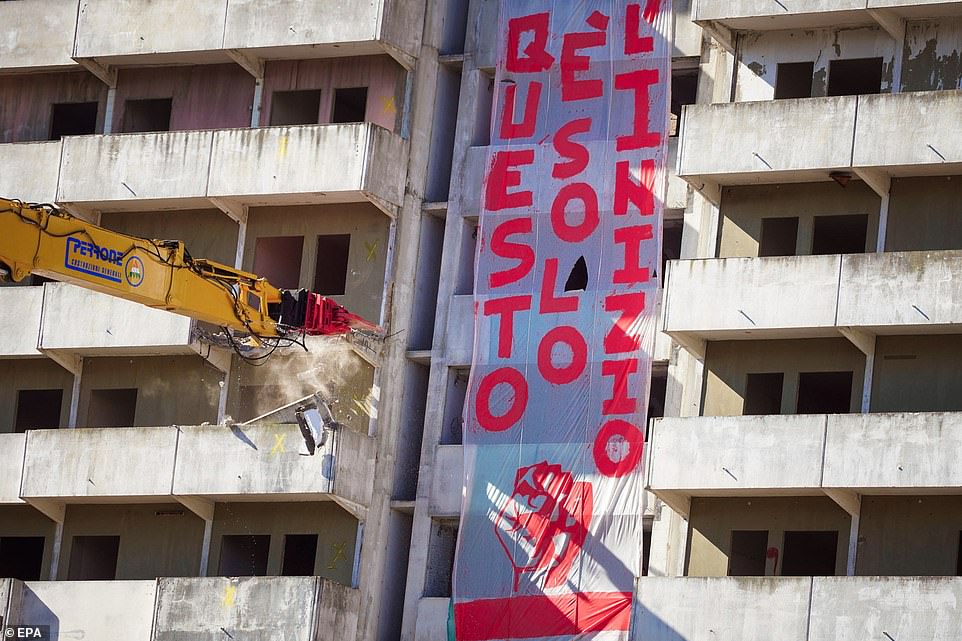 A banner reading ‘this is only the beginning’ hangs from the so-called ‘Sails of Scampia’ (Le Vele di Scampia) tower block, during demolition works in Scampia, on the outskirts of Naples 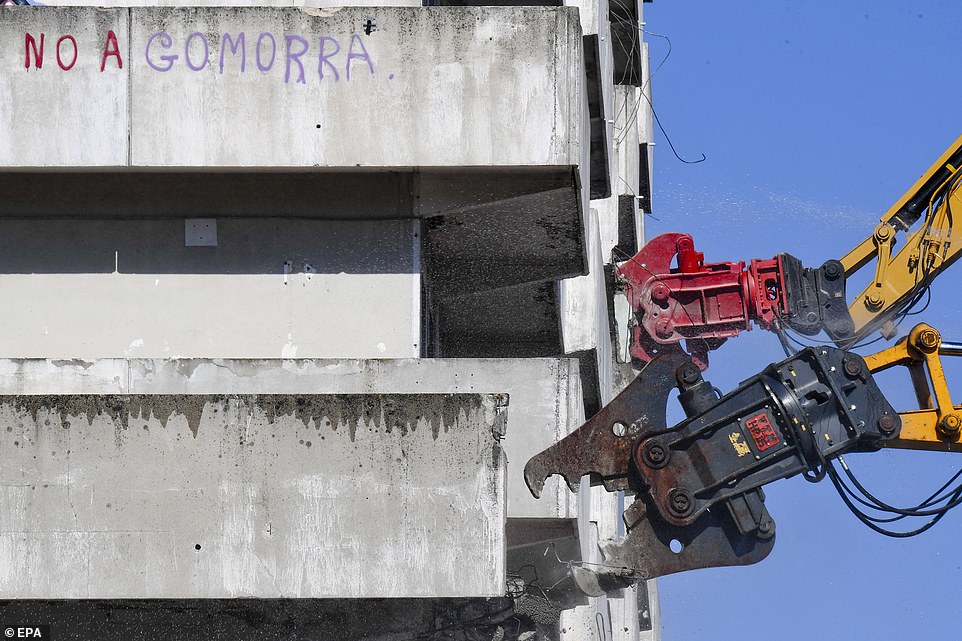 Demolition works for the last four of the notorious Vele (Sails) buildings in the drug-ridden Naples district of Scampia began on 20 February 2020, after years of being associated with the Camorra mafia 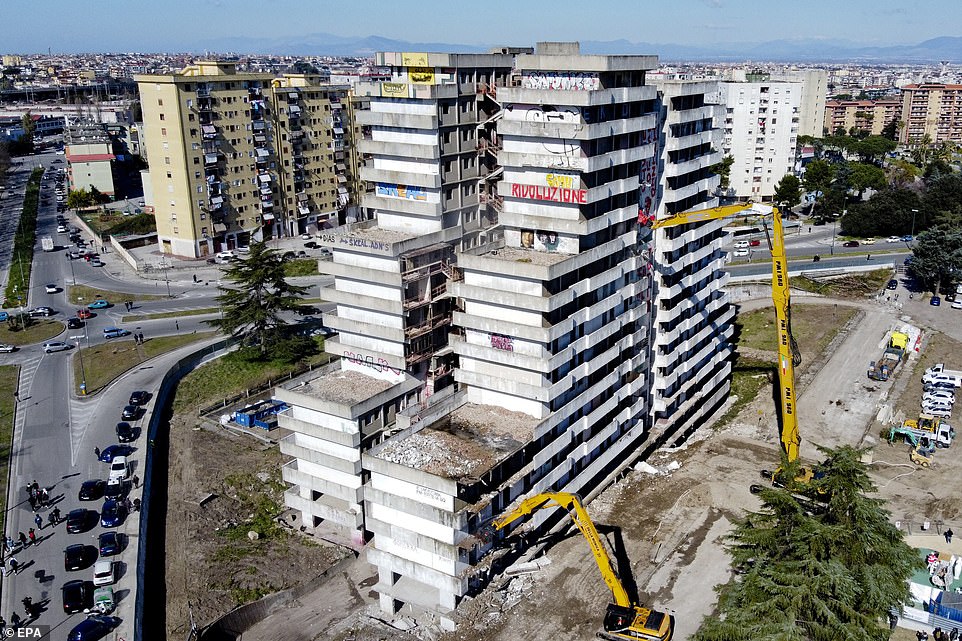 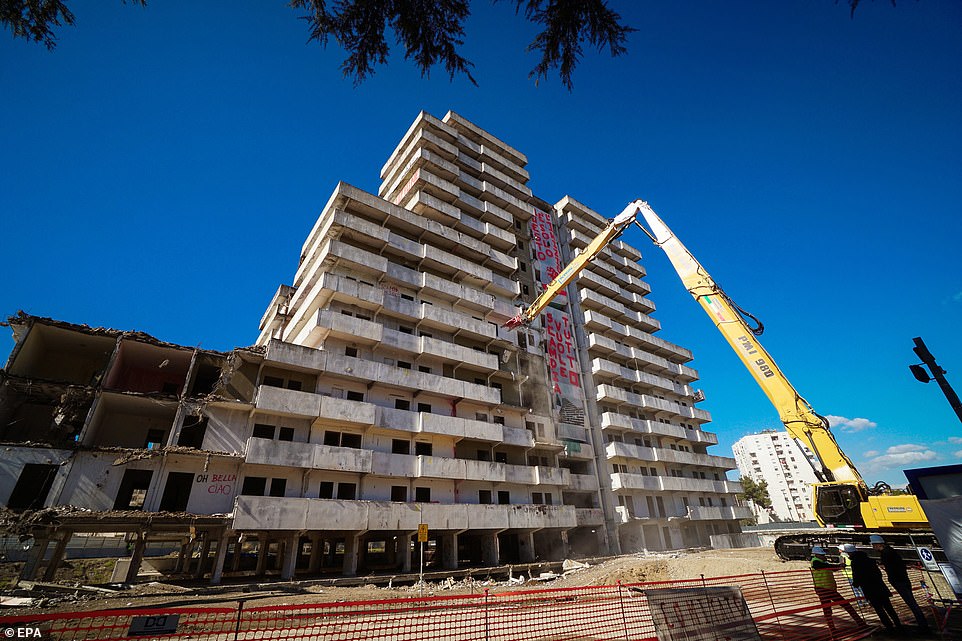 Banners reading ‘this is only the beginning’ (top) and ‘Scampia wants all’ hang from the so-called ‘Sails of Scampia’ (Le Vele di Scampia) tower block, during demolition works