Staff and customers at a Bendigo toy shop were moved to tears this week after a mystery couple walked in and paid off thousands of dollars worth of laybys for Christmas toys.

Scott Mills, who owns Toyworld in Bendigo, said the grandparents visited his shop on Wednesday morning and said they wanted to help those who were struggling. They then paid off the bills of 82 families. 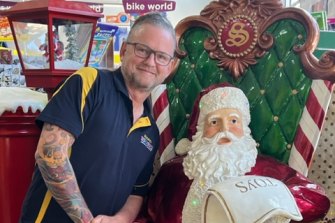 “They told us a story about how they were in hardship when they were younger and struggled to pay their bills ahead of Christmas,” Mr Mills said.

“They always swore that if they ever found themselves in a position where they could help, they would. After the crap year we’ve all had, they wanted to do some good.”

The couple’s generosity has paid for Christmas toys including Lego, trikes, dolls, toy prams, remote control cars, Barbies and board games. Many families had been unable to pay off their debt and bring home the toys for their children.

“These are toys for families who don’t have the money to duck in and buy their children’s Christmas presents in one go. They are strugglers and they have to be organised. They come in every week and pay off a little bit,” Mr Mills said.

While Mr Mills knows the identity of the local couple, he said they wanted to remain anonymous and did not want to disclose how much they had spent.

He said two of his staff members spent Wednesday afternoon crying as they phoned families to share the good news.

One mother was in quarantine after coming into close contact with a COVID-positive person and as a result, had lost casual work at her a cafe. She didn’t qualify for welfare and had been worried about how she was going to afford Christmas.

Another mum was driving and starting crying when she heard the news, and had to pull to the side of the road to compose herself. One father told staff he had $10 in his bank account after losing his job and the couple’s generosity would mean his twins would receive a birthday present next week.

It’s been a tough year for the retail industry, and Mr Mills said the cash injection would do wonders for his struggling business.

“I’ve had a lot of sleepless nights,” he said.

It’s not the first time Good Samaritans have paid off laybys at Toyworld stores.

Donna White, the brand manager for Associated Retailer Limited, which owns the popular Toyworld trademark, said similar acts of kindness had played out at least four times in recent years.

She said generous strangers had also paid off laybys at Toyworld shops in Pakenham in Melbourne’s south-east, in Canberra and Gympie and Burleigh Waters in Queensland.

“There are some very kind people out there,” she said. “This gives everyone a really good feeling.”

In need of some good news? The Greater Good newsletter delivers stories to your inbox to brighten your outlook. Sign up here.