MPs will not vote on a Brexit plan for another fortnight amid accusations that Theresa May is running down the clock on the crunch negotiations.

Cabinet minister Andrea Leadsom today revealed the Commons will get to vote on the Government’s proposed Brexit ‘next steps’ on January 29.

That will be two weeks after Mrs May ‘s Brexit blueprint was rejected by a staggering 230 votes – the biggest defeat ever inflected on a British Prime  Minister.

The revelation comes as the PM faces furious accusations from Labour that she is ‘running down the clock’ on negotiations to ‘blackmail’ MPs into backing her deal at the last minute. 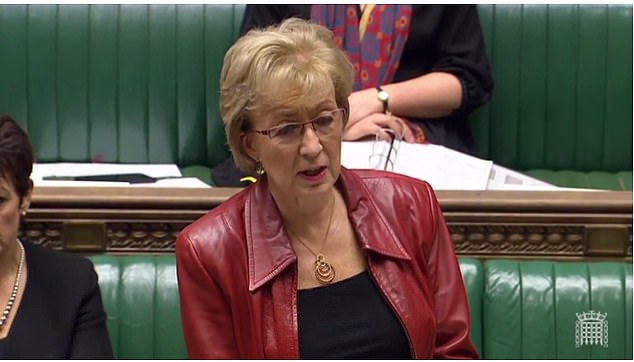 Mrs May has denied the claim, and is holding meetings with political opponents as she scrambles to draw up a Brexit plan which can command the support of MPs.

Commons leader Mrs Leadsom told MPs: ‘A statement and a motion on the Government’s next steps under section 13 of the EU (Withdrawal) Act will be tabled on Monday.

Lidington and Gove pitch in for charm offensive on Brexit plan

Whitehall was buzzing with politicians heading to and from Brexit talks today.

Theresa May has put her effective deputy David Lidington in charge of coordinating the cross-party efforts.

But Environment Secretary Michael Gove – a key figure in the Leave campaign – is also playing a critical role.

Defence Secretary Gavin Williamson could use his strong links with the DUP to try and win over the government’s allies.

Mrs May is hosting MPs in Downing Street, while other meetings are taking place in the Cabinet Office on Whitehall.

The buildings are connected.

‘A full day’s debate on the motion will take place on Tuesday January 29, subject to the agreement of the House.’

The Government will use the January 29 debate to outline what it plans to do next in the Brexit talks in a motion – exactly two months before Brexit day.

Crucially, the motion can be amended by MPs, who will use it to try to shape Brexit – for example by calling for a second referendum, a softer Norway-style exit, or an extension of Article 50.

The news of the looming Commons clash comes as Mrs May desperately scrambles to try to come up with a Brexit Plan B.

The PM has spent the past 24 hours holding meetings with MPs from rival factions across the Commons – including the leaders of the SNP, Greens, Lib Dems and Plaid Cymru.

But Jeremy Corbyn has snubbed her invitation – demanding that she rules out a no deal Brexit before he will even sit down with her.

This morning the PM hosted hardline Brexiteers from inside her own party – including Steve Baker, David Davis and Iain Duncan-Smith for discussions at No10 as she tries to strike a compromise.

Speaking outside Number 10 late last night, Mrs May said: ‘I understand that to people getting on with their lives, away from Westminster, the events of the past 24 hours will have been unsettling.

‘Overwhelmingly, the British people want us to get on with delivering Brexit, and also address the other important issues they care about.

‘But the deal which I have worked to agree with the European Union was rejected by MPs, and by a large margin. I believe it is my duty to deliver on the British people’s instruction to leave the EU. And I intend to do so.’ 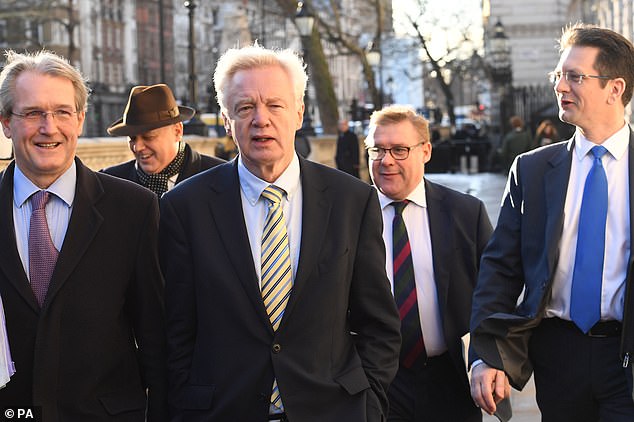 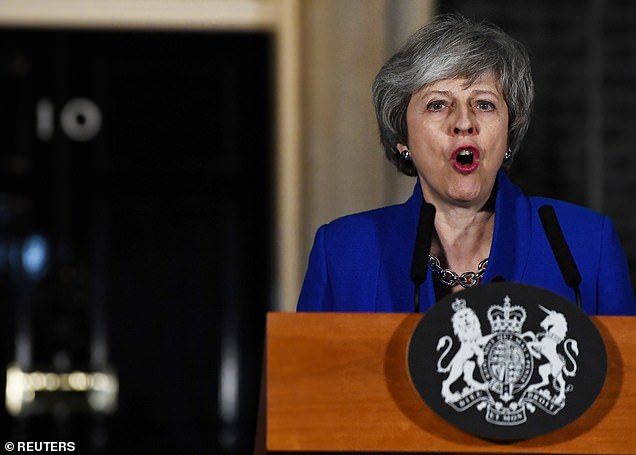 In a Downing Street speech last night, Theresa May held out an alive branch to political rivals last night after surviving a Labour bid to oust her

But Mr Corbyn underlined his intentions by delivering a Brexit speech in the marginal constituency of Hastings this morning.

‘Last night’s offer of talks with party leaders turned out to be simply a stunt, not the serious attempt to engage with the new reality that is needed,’ he said.

He added: ‘I say to the Prime Minister again: I am quite happy to talk but the starting point for any talks about Brexit must be that the threat of a disastrous no-deal outcome is ruled out, taken off the table, and we can talk about the future of the plans that we will put forward and the future relationship with Europe.’

‘Since he appears to be determined to play party political games rather than acting on the wishes of his own members and MPs, he will no longer be able to rely on our support for further no confidence motions,’ he said.

‘I believe other parties are taking the same view. It’s time Mr Corbyn got off the fence and made his position plain.’