A group of 46 Tory MPs and peers has demanded Parliament ‘lead by example’ in the Government’s back to work drive, claiming it is ‘absurd’ the House of Commons is still ‘near empty’.

The group said the Government is ‘right to exhort people to return to their place of work’ and Parliament should show the way – but currently ‘it is failing to do so’.

The calls to drop the current limit of 50 MPs being allowed in the Commons at any one time came as Sir Lindsay Hoyle pushed for parliamentarians to be tested for coronavirus every day.

The Commons Speaker said daily testing would enable Parliament to get ‘back to normal’. 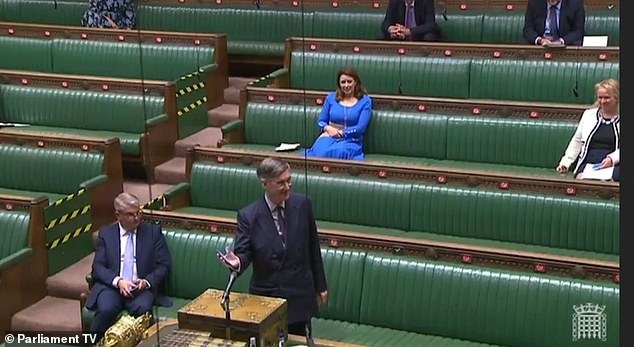 A group of 46 Tory MPs and peers has demanded that Parliament ‘lead by example’ and show workers it is safe for them to return to their workplace. The group wants restrictions on the number of MPs allowed in the Commons to be dropped

The House of Commons has been subject to strict social distancing rules ever since MPs physically returned to work following an initial shutdown.

But some MPs are increasingly frustrated at the sparsely populated green benches, arguing the Commons is setting a poor example to the nation while also making it more difficult to hold ministers to account.

In a letter published by The Telegraph, the group of 46 Tory figures said: ‘We all need to learn to live with the virus, and manage the risks, so we can get the economy back on its feet.

‘Parliament must therefore lead by example, but it is failing to do so.

‘We are in the absurd situation where ministers, speaking in near empty debating chambers, are telling people it is safe to go back to work.’

The group said that ‘all necessary steps must be taken’ to get back to ‘business as usual’ in both the Commons and the House of Lords.

A failure to do so would result in workers asking why they should return to offices ‘if MPs and peers appear unwilling to do so’, the group argued.

Meanwhile, Sir Lindsay has pinned his hopes of a return to normal on introducing a daily testing regime for MPs.

‘What I have got to do is make sure the House is safe, not just for MPs but for staff – staff of MPs, staff of the House of Commons – they really matter to me as well.

Told that such a move could spark a backlash given that some in the care sector are still struggling to get tested, Sir Lindsay said: ‘I believe we all should have tests made available. 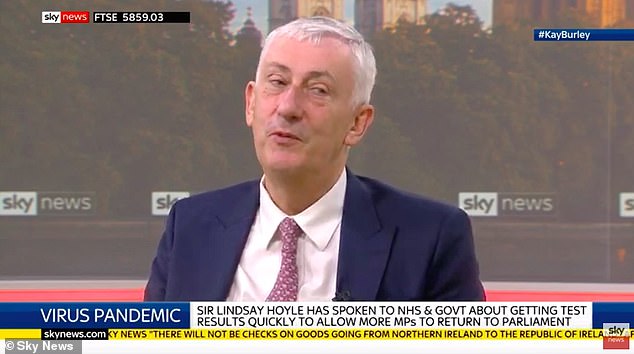 ‘There is a lot of investment going in there, there’s a lot of new tests coming out onto the market.

‘Of course it is not just for us. I would like to see the whole of the country wherever we can test to be tested.

‘What we need is a quick turnaround test so in other words if we can do that within five minutes of somebody arriving, that is the type of test I would like to see.’

He added: ‘In the end we have got to get the country back. The obvious answer is we need that vaccine. That is not with us. So it is what we can do now to make places safe.’