This is the shocking moment that an 80-year-old man is dragged out of his son’s house by an angry motorist accusing of him of spitting on his car.

Door bell camera footage shows the tattooed man hammering on the front door of the home of the son of Dennis Macleod, 80, in Waterloo, Liverpool, on Tuesday evening and when he answers, he says: ‘you’re spitting on my car.’

When Mr Macleod denies it, the man says, ‘you were f***ing seen’, and moments later, drags him out of the house to where the car is immediately outside his gate. 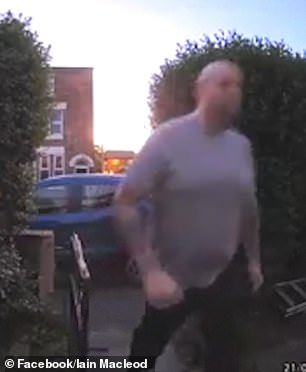 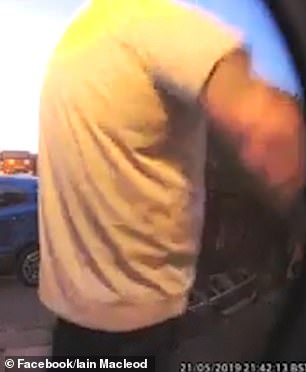 This is the moment before Dennis Macleod, 80, is dragged out of his son’s home in Waterloo, Liverpool, by a man claiming that he spat on his car

Before being dragged away from his son’s front door, Mr Macleod had claimed the man was ‘parking there all the time’.

However, when the white-shirted man replied, ‘I’m not parking there all the time’, Mr Macleod said: ‘you are!’

The white-shirted man then appeared to slap the old man’s hand down, and, with a bottle of what appeared to be cleaning liquid in his other hand, then dragged him out of the front gate.

Launching another tirade as he dragged him, he said: ‘You will clean the f***ing car, you horrible little b****rd.’

Once the pair were at the car, the man then loomed over him and said: ‘clean that car!’

Mr Macleod then looked back to his house and shouted to his son: ‘Ian, call the police!’ 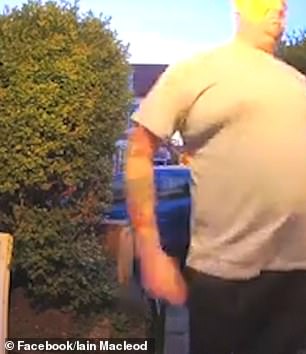 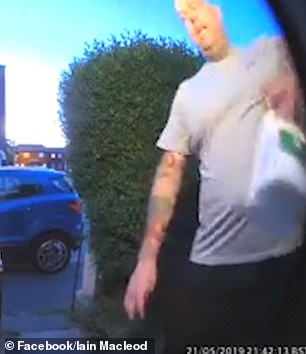 After Mr Macleod opened the door, the man said: ‘you’re spitting on my car.’ Mr Macleod denied he had done so but the man then slapped his hand out of the way and dragged him down the path towards the car

He then added, ‘he’s assaulted me,’ before an unidentified woman appeared and ushered the aggressive man away.

Iain Macleod said that his ‘shaken’ father had been house-sitting for him while he was on holiday.

He denied that his father spat on the man’s car because, after returning from holiday earlier that day, the pair had been talking inside for more than an hour.

He told MailOnline: ‘I just came back from holiday had a chat with him for about an hour so it could not have been him. 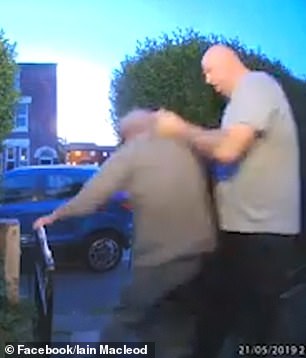 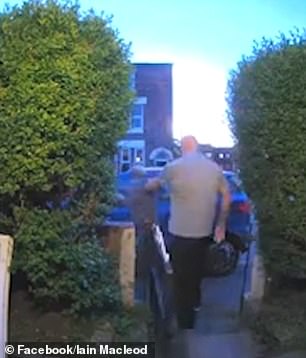 Mr Macleod was then dragged out of the gate by the man, who said: ‘You will clean the f***ing car, you horrible little b****rd.’ Once the pair were at the car, the man then loomed over him and said: ‘clean that car!’

‘I went upstairs and I heard banging on the door, I thought “that’s nothing” but the next thing I heard was commotion.

Iain Macleod then went out to intervene in the confrontation.

He said the unidentified woman appeared to be his partner and had tried to ‘neutralise’ the situation by ushering the man away.

‘He was lying through his teeth [about my father],’ Mr Macleod said. 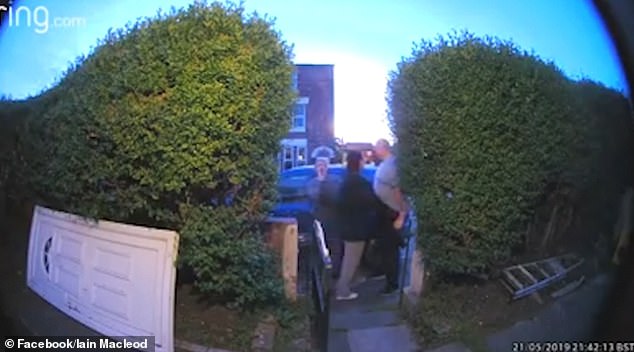 Mr Macleod then looked back to his house and shouted to his son: ‘Ian, call the police!’ Mr Macleod had been house-sitting for his son while he was on holiday

‘He eventually left after squaring up to me when I came out. He was quite confrontational.

‘As you would be. He was about 6ft 6. The fella was huge. He dragged my Dad like a rag doll. I’m fuming to be honest.

‘I’ve never seen the guy before in my life.’

A spokesman for Merseyside Police said: ‘We were called at 5.10pm on Wednesday 22nd May to reports an 80 year-old man had been assaulted in Wellington Street, Waterloo.

‘Officers were contacted following reports an unknown male had knocked on the door of a house and accused the occupant of spitting on his car.

‘During the confrontation the male grabbed hold of the pensioner’s arm. The male then got into his car and drove away.

‘The pensioner was not seriously hurt but was left with a sore arm.