Council Scrooges threaten to fine kind-hearted mother, 44, for flyposting after she put up leaflets inviting lonely people to enjoy a free Christmas dinner 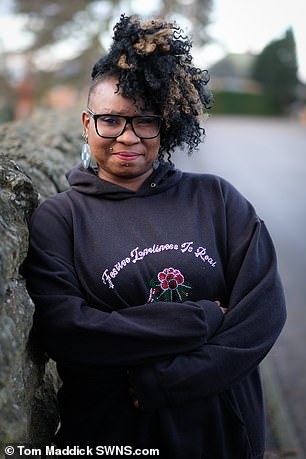 Mo Fayose, 44, posted notices around Basford in Nottingham asking people to get in touch if they were on their own during the festive period. Pictured in an undated image

Council scrooges threatened to fine a kind-hearted mother for flyposting after she put up leaflets inviting lonely people to enjoy a free Christmas dinner.

Mo Fayose, 44, posted notices around Basford in Nottingham asking people to get in touch if they were on their own during the festive period.

But the mental health nurse was shocked when she received an email from the town hall accusing her of illegal behaviour.

The single mother-of-two has hosted Christmas Day dinners for vulnerable and lonely people for the last three years.

She began by opening her home to five guests but the event is now so popular she hires two community centres for more than 100 people.

Ms Fayose and team of volunteers cook a three-course dinner, complete with crackers and decorations. She spends the year raising around £3,000 to buy the food and cover the cost of hiring the venues.

But when she put up posters for this year’s event, she was stunned when a Nottingham City Council community protection officer ordered her to remove them ‘immediately’.

Officials have now backtracked and deemed the letters ‘a genuine misunderstanding’. 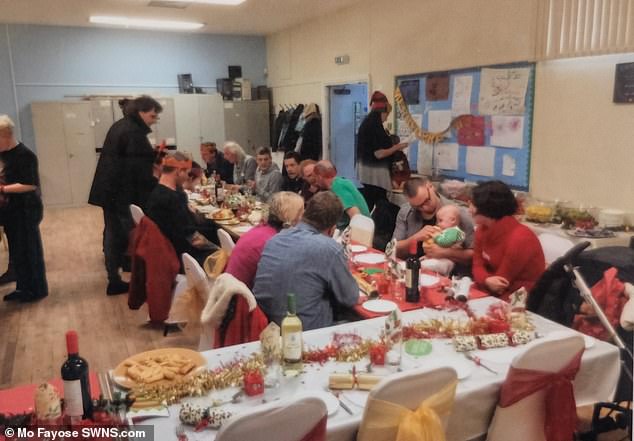 The single mother-of-two has hosted festive dinners for vulnerable and lonely people for the last three years. Pictured is the event on Christmas Day in 2016

Ms Fayose removed the flyers but blasted the council for taking its initial ‘heavy handed approach’ to her free event. She said: ‘The posters are really important; it’s the way to get it to those who are not using social media.

‘I was really shocked when I got the email telling me I was breaking the law. I just wanted to help people who were on their own at Christmas. This was the first time I had received an email like this from the council.

‘I started putting up the flyers in November and the council emailed me on December 4.’

The email read: ‘We know what you are doing is good but it is classed as fly-posting which is a problem. Therefore I would ask you to take it down otherwise you would be fined.’

Have your Christmas charity plans been ruined by Scrooge-like officials?

Ms Fayose called the email ‘just crazy’, and said: ‘I put the posters all over Basford so everyone could see them.

‘I put it online but not everyone is on social media especially older people who are sometimes the loneliest in our society.’

The mother, who is separated from her husband and lives with her 19-year-old daughter Ebbyy and 15-year-old son Jebediah put on the Christmas dinners three years ago.

‘A patient on the ward where I was doing my mental health training told me that they don’t celebrate Christmas because they had no one to spend it with,’ she said.

‘That really got to me and I thought there must be something I can do to help people like this. 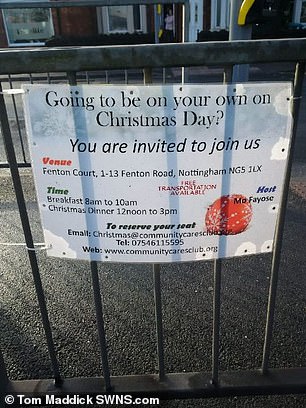 This is one of the posters that led to Nottingham City Council threatening a fine. Photo is undated

‘I just thought I would invite people to my home on Christmas Day and make dinner for them.’

By 2016 the event had ballooned to include 130 people, and this year Ms Fayose is expecting even more.

‘I just hope enough people saw the poster before I had to take them down,’ she said. ‘I’ve had lots of people replying to me but there are still places available.

‘I would hate it if anyone missed out and spent the day on their own just because the council ordered me to take them down.

‘The lunch is a really happy event and everyone gets on and enjoys eating and celebrating together.

‘Through my work as a mental health nurse I know that festive loneliness is real. I just wanted to do my small part in helping people come together.

Nottingham City Council has since decided to take no action regarding the posters and deemed the incident a ‘genuine misunderstanding’.

Councillor Linda Woodings said: ‘It is a really worthy cause and there has been a genuine misunderstanding.

‘The council always promotes the importance of looking after each other and this includes encouraging people to cook a Christmas dinner for neighbours who may be on their own.’