Tokyo: The number of missing people has risen substantially in Japan two days after torrential rains triggered landslides swept away hundreds of homes, shops and vehicles.

At least three people have been found dead and 113 are missing as a result of the mud wave that hit the central Japanese city of Atami at the weekend, a local official and media said on Monday. Initially officials said some 20 people were missing. 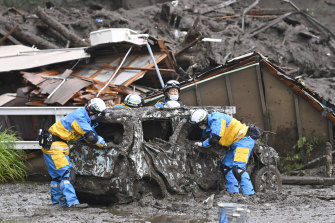 Rescuers conduct a search operation at the site of a mudslide at Izusan in Atami, Shizuoka prefecture, southwest of Tokyo on Sunday.Credit:Kyodo News/AP

The torrential rains and landslides are a reminder of the natural disasters – including earthquakes, volcano eruptions and tsunami – that haunt Japan every year. Except this time, the country also has the Tokyo Olympics, which begin on July 23, and the coronavirus pandemic to manage.

Local media reported the country’s Seflf-Defence Forces have been asked to mobilise. 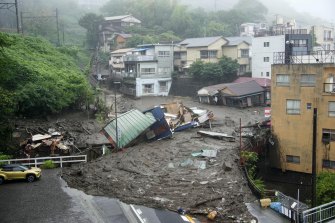 A powerful mudslide carrying a deluge of black water and debris crashed into rows of houses in Atami, south-west of Tokyo on Saturday.Credit:AP

“I want you to do your utmost to take emergency measures while placing people’s lives first,” Prime Minister Yoshihide Suga said at an emergency meeting of the relevant ministers, the paper reported.

The landslides, which affected about 130 buildings, occurred on Saturday 90 kilometres south-west of Tokyo in Atami, which is home to hot spring resorts and sits on a steep slope into a bay.

The water, mud and debris are thought to have flowed along a river for about 2 kilometres to the sea, local media said.