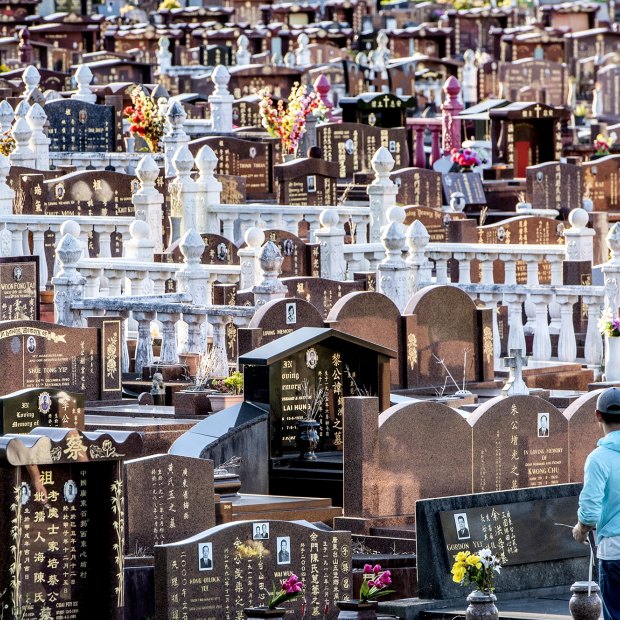 At the near-full Rookwood Cemetery, Sydney’s death problems are made clear.Credit:Steven Siewert

Everyone dies. But last year in NSW, far more people than usual did. Every single week up to September, dozens more deaths were reported than the state’s average. The cause is no secret: a rapidly ageing population combined with the ongoing impact of the pandemic.

But behind those numbers stands a colossal and often misunderstood industry that deals with everything from palliative care and burials to cremation and counselling.

And under immense pressure, 2022 changed it forever.

Crematorium operators spent the year dealing with a “high volume” of requests, funeral directors have been forced to increase their services and, as if to prove bureaucracy stays with you to the grave, the city’s cemeteries are set to be full within 10 years.

Data from the Australian Bureau of Statistics, from January to September 2022, reveals deaths in the year far exceeded the baseline average for every single week, apart from two weeks at the end of September.

At its worst, during the peak of the Omicron crisis in January 2022, there were 367 extra deaths in a single week. After a slight slump, the number trended up once again to August.

Guardian Funerals, a giant provider of funerals across the state, said they assisted “more families than ever before in 2022 and as we have commenced 2023, there continues to be an increased demand for our services.”

At their funeral parlour in Lidcombe, the work piled up for morticians Irini Papanikolaou and Jo Place. Working as an embalmer for parent company InvoCare – which also runs White Lady Funerals, Simplicity Funerals and more than 50 other Australian funerals and crematorium brands –Papanikolaou cares for the dead: she dresses them in clothes, styles their hair and makes them look presentable for their family’s final viewing.

“I absolutely love what I do,” she says. “I’ve been doing this for many years, and it’s just an honour to be able to prepare a deceased.” She says there are challenges associated with the job, particularly in times of traumatic or early death.

The work is made harder when it’s busy – Papanikolaou sometimes works up to 12-hour days. 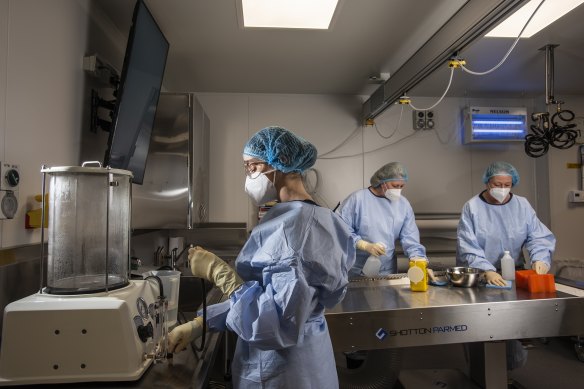 “It’s about having the conversations with the families about understanding when the funerals can happen,” she says. “It’s really about the scheduling of the funeral service itself.”

Nick Maurer, the third-generation leader of Maurer Family Funerals in Chatswood, says his family business felt the pinch but kept up with demand.

“We’ve got a relatively small market share. If we go from 40 to 50 funerals a month, that’s a big increase for us,” he says.

While it can take between five and 10 days to organise a funeral, his business has helped organise funerals in far shorter time periods for clients turned away by other companies due to lack of capacity.

It’s only now, after a few years of increased focus on dying, that the public is experiencing what those in the industry have known for decades: when it comes to dealing with death, Sydney is headed for a crisis.

In the most dire state are Sydney’s cemeteries: they’re rapidly running out of space. Rookwood Cemetery, located between Lidcombe and Strathfield, is about as large as Sydney’s CBD. But less than five per cent of its burial space remains open. Space for Maori and Russian Orthodox groups, among others, are set to be full within a matter of years.

Government modelling says state-owned cemeteries will fill up by 2029 – at the latest. And across the city, we’ll run out of space to bury our dead entirely by 2051.

(Catholic Cemeteries and Crematoria began work on Macarthur Memorial Park in Varroville, in Sydney’s south-west, late last year. It was the first new cemetery opened in the state in more than 50 years – but will do little to solve the major structural issues of the city’s overcrowding cemeteries.)

It’s a horrifying thought, with grave public health consequences as well as the cultural, spiritual and familial impact on those who mourn. How did it come to this?

Bad planning, for one thing: the most recent government-owned cemetery was opened in 1948. But constant bickering over who should own Sydney’s cemeteries – the state government, churches or councils – has played a major role in slowing any progress.

Contemporary discussions about the issue, which resulted in the state government forcibly amalgamating 17, and then a further five, cemetery trusts into single state-owned entity OneCrown in 2021, have much deeper roots to the pre-federation era. The NSW government attempted to create a “general” cemetery at Moore Park, where the dead would be buried without being grouped according to religion. Church leaders argued the government was taking control of their own ancient spiritual practices.

“It was just uproar,” says Sydney historian Lisa Murray, who has written a book on Sydney’s cemeteries. “The Catholics just said, ‘Nah, we’re not doing it’, and so did the Church of England.”

Determined to create a general cemetery for its growing population, the state government found a compromise in creating a cemetery for everyone, with land for each denomination apportioned based on the proportion of religious affiliations of the population at the time.

So Rookwood was born. Now the largest cemetery in the Southern Hemisphere, it is home to more than 640,000 bodies and is – possibly – the single most ethnically and religiously diverse postcode in the world.

Most of the cemetery’s space was originally set aside for Anglicans, Catholics and other Christian denominations. But as Sydney has grown, so too has the cemetery. Jewish and Muslim graves have been added on its edges, between the Catholic graves and the neighbouring golf course. The Druze and Khmer communities have found a resting place for their people among the war graves and gardens. The garden of the dead now tells the rich and living story of Sydney’s people and culture over time.

But not for much longer. While there are only a few decades until Sydney’s cemeteries will be full for good, one factor has kept the worst at bay so far: cremation.

More than three in four people across the state are cremated (in Sydney, around 66 per cent choose cremation, lower than the state average given the greater number of migrants who practice faiths that prohibit the practice).

41,448 grave spots were saved over the past financial year with next of kin receiving the deceased’s ashes in urns in lieu of burial.

Cremation facilities are like any other industrial equipment. They’re big and loud. It can take about an hour to burn a body – but the exact length of time depends on a body’s size and the time of day (incinerators are hotter towards the end of the day, when they have been burning the longest).

But dying is an expensive exercise, regardless of how you do it. Data from 2021 shows a no-frills cremation in Sydney costs an average of $7253, while a simple memorial-free burial costs $6331 – not including a plot, which costs an average of $15,000 (but at Waverley Cemetery, the resting place with a view, a plot can cost as much as $28,000).

And while death is as certain as the high fees you’ll pay for it, there are ways to make it more comfortable. It’s what drove palliative care specialist Rachael Zielinski to become a fulltime nurse to the dying.

“I feel this deep connection with someone when they’re coming to the end of their life, she says. “I feel so lucky to be in that time with someone.”