Just his resting ‘Grinch’ face! Mom hits back against criticism of ‘animal cruelty’ after she showcased her Miniature Schnauzer Rizzo’s Christmas makeover

A mom from Chicago, Illinois, has defended her actions after trolls criticized her for dyeing her ‘sad’ dog bright green, white and red to resemble the Grinch.

But the mom-of-five was flooded with negative comments branding it ‘animal cruelty’ to have colored the one-year-old’s fur, despite the fact that non-toxic dyes were used at the groomers. 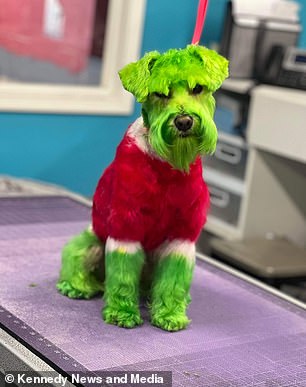 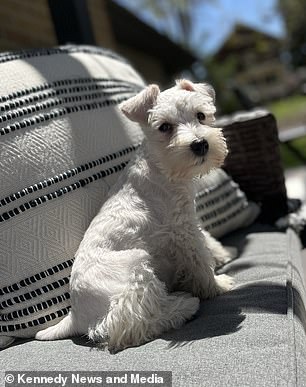 Another wrote: ‘He looks so sad.’

One person posted: ‘How awful, that poor dog.’

Whereas others saw the fun side of it.

One wrote: ‘This is the cutest thing ever.’

Another commented: ‘He looks precious! As a groomer this is absolutely not abuse in any way. imo it’s no different than putting babies in beauty pageants all dolled up.’

Someone else added: ‘Love it.’ 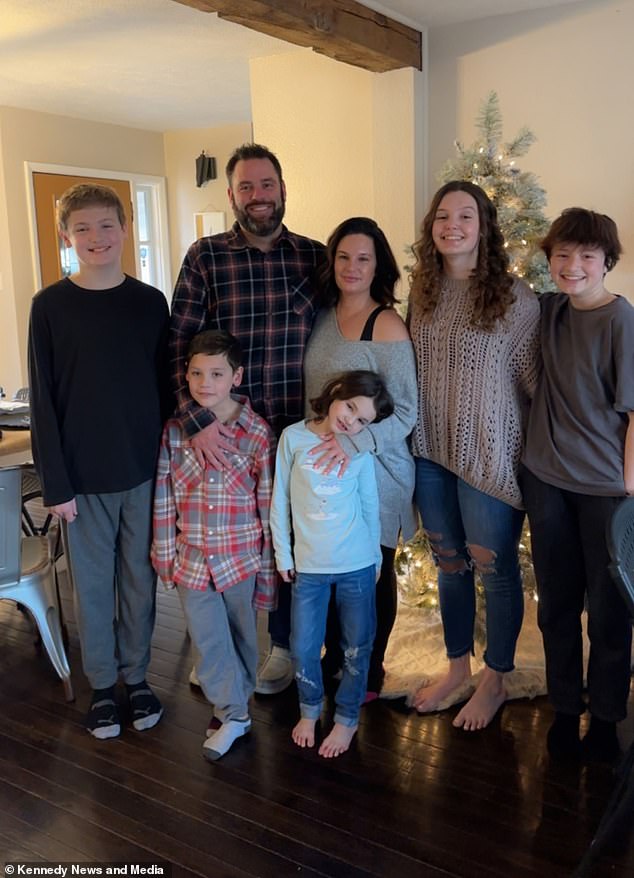 Ashley, who is mom to Madelyn, 15, Hayden, 14, Elise, 12, Kendall, seven, and five-year-old Hudson, said: ‘We love Christmas in our house and absolutely love the Grinch’

The aesthetician, who is married to 37-year-old golf pro Matthew Spielmann, argued that dogs of this breed tend to have ‘grumpy-looking faces’, adding that it is not in fitting with the pet’s ‘happy-go-lucky soul’.

Ashley shared several videos of her ‘Grinch dog’ posing in front of the Christmas tree – and one of him getting cuddles on the couch alongside the sarcastic caption ‘so abused’.

She said: ‘We love Christmas in our house and I knew with his white fur our groomer would be able to color him fine.

‘I was so excited when I saw him coming out of the groomers. She sent pictures during the process and after when he was all blow-dried and I loved it immediately, which I knew I would.’ 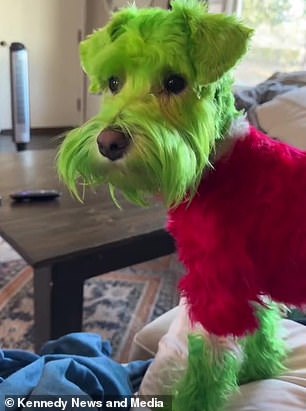 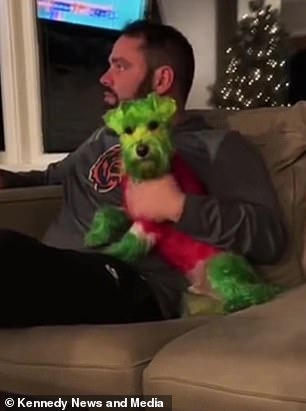 Ashley said: ‘My children and husband at first thought he was silly. I think it’s grown on them a little bit now they have this little green and red dog running around’

Ashley added: ‘My children and husband at first thought he was silly. I think it’s grown on them a little bit now they have this little green and red dog running around.

‘When I take him out on a walk people go crazy for his fur. I took him to Starbucks the day after and people in the line were taking pictures of him.’

She said Rizzo’s festive makeover was done by the same groomer he visits every six weeks.

Responding to online criticism, Ashley, who also has a one-year-old black Miniature Schnauzer called Sosa, said that a dog-friendly dye specifically for animals that is ‘completely safe’ was used. 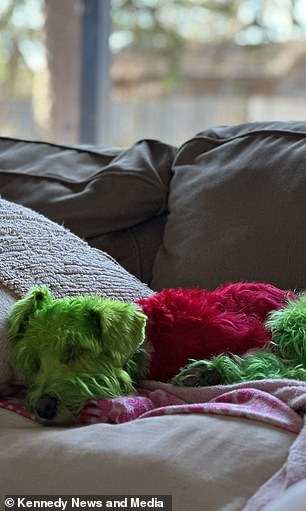 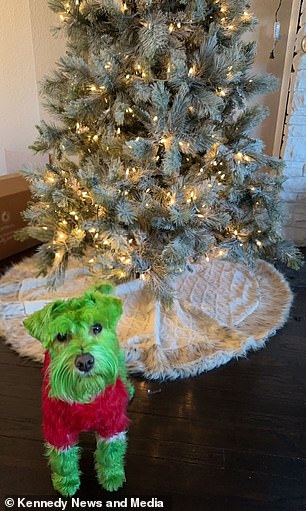 Ashely said Rizzo’s festive makeover was done by the same groomer he visits every six weeks. Responding to criticism online, she said that a dog-friendly dye specifically for animals was used that is ‘completely safe’

She continued: ‘Some people online have lost their minds over it and said it’s animal cruelty.

‘When I posted it [the video of him with dyed fur] I did not think it would get the reaction it did as far as how many people have felt the need to comment, but also I’m not surprised.

‘We’re in this day and age where everybody has to comment on everything – good or bad.

‘Comments are comments at this point, it doesn’t bother me at all.’

Rizzo was bought in April as a mate for Sosa.

Ashley said: ‘Both he and Sosa are well-loved members of the family. I don’t even want to say it’s hurtful because we know what a good life our dogs have.

‘People are basing their judgements on a ten-second clip. It’s just crazy to me that people get so upset and mad about something they don’t even really know.

‘He’s a pretty happy-go-lucky soul so when people are commenting on how sad he looks, I’m just like: “That’s just the breed”.

‘I shared additional videos, I don’t want to say mocking people, but if people are going to say it I’ll say: “Yeah, look his life is so bad”. 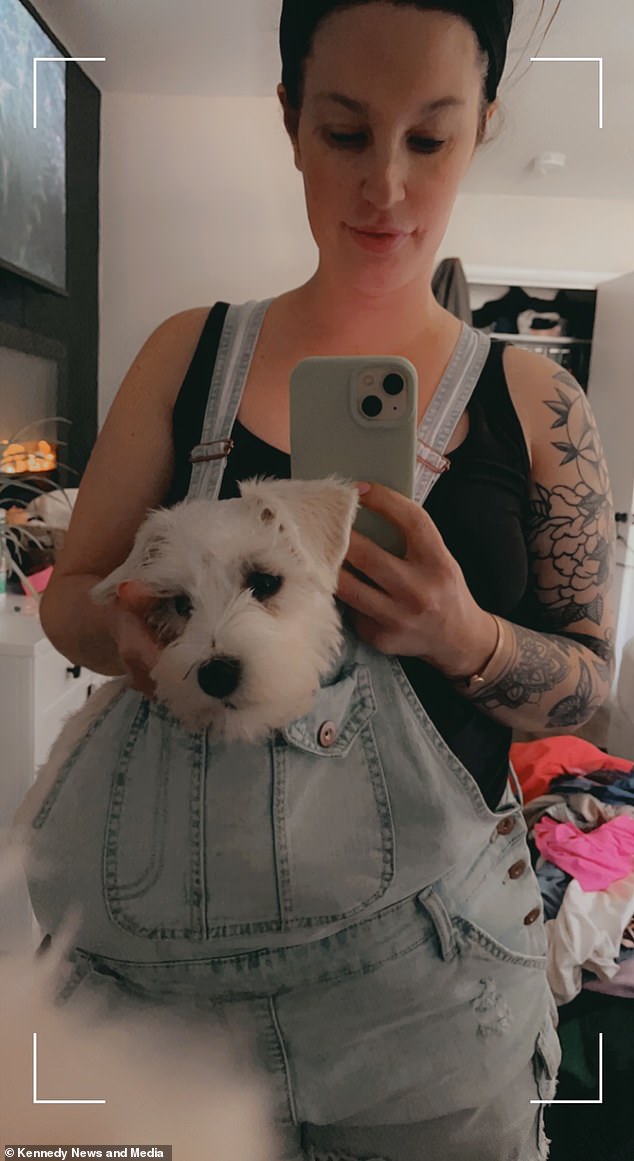 Pictured: Ashley with Miniature Schnauzer Rizzo before his festive transformation

She told Newsweek: ‘We’re really looking forward to Christmas and having our own little Grinch in our household. I hope he doesn’t steal the presents.

‘We love Christmas in our house and absolutely love the Grinch.

‘My younger children watched the movie every night last year. So because Schnauzers naturally have grumpy faces I thought we would do something fun and he would be the perfect Grinch.’

Ashley said that the makeover process was a relatively quick one, too, lasting just an hour and a half.

She said: ‘My goal in doing this was to spread happiness, smiles and the Christmas spirit.

‘I actually had a lady message me on TikTok who told me that the day she saw my video while she was in radiation therapy for cancer.

‘She said it made her whole day. It was so awesome, this complete stranger who is going through one of the hardest things, that my dog could make her day.

‘I hope it starts a trend and we see all the holiday pets or a bunch of colored Grinch pets everywhere.’