Michael Gove gave television viewers his best Scouse accent today as he told people to ‘calm down’ about the cost of living crisis – and ruled out an emergency Budget to provide more help to struggling families.

The Levelling-Up Secretary also dropped a sort of American accent in a lively display on television this morning as he sought to play down confusion sown by Boris Johnson yesterday.

The Prime Minister, in his response to the Queen’s Speech, warned there were limits on how much public money he was prepared to commit, but told MPs: ‘The Chancellor and I will be saying more about this in the days to come.’

It sparked immediate speculation of a new fiscal intervention by the Treasury, but both it and No10 were quick to rule out an imminent special announcement.

Labour has demanded an emergency budget saying that swift action is needed with inflation expected to hit 10 per cent by October off the back of rising household bills and food costs.

‘It is an example of some commentators chasing their own tails and trying to take a statement that is common sensical, turning it into a major, capital letters, big news story,’ he said.

‘And in fact, when the Treasury quite rightly say, calm down, people instead of recognising that they have over-inflated the story in the first place, then say ”oh, this is clearly a split”. 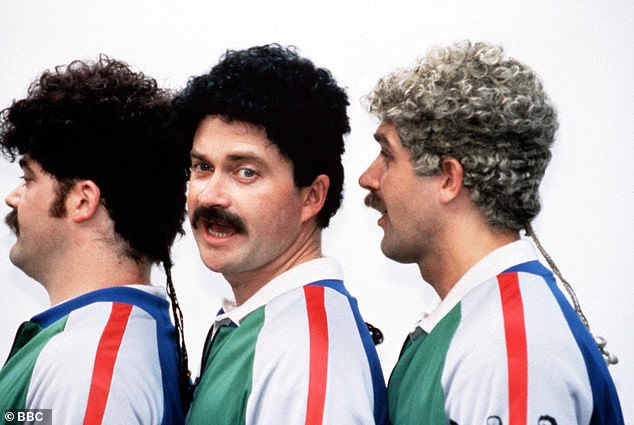 The Scousers sketch revolved around three Liverpudlians in tracksuits, with two breaking into arguments and the third telling them to ‘calm down, calm down’. 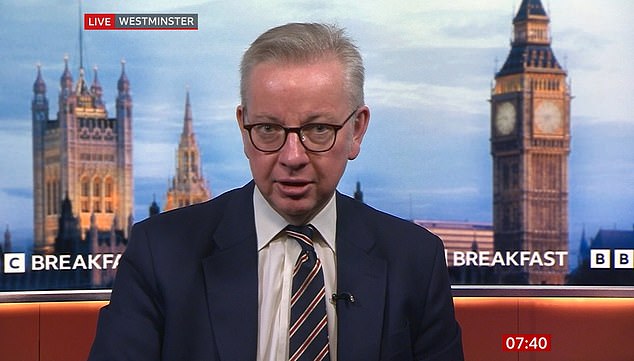 The Levelling-Up Secretary also dropped a sort of American accent in a lively display on television this morning as he sought to play down confusion sown by Boris Johnson yesterday.

‘The truth is the Prime Minister says ”Government is working hard” and the Treasury say ”Yes we are and I’m afraid the Budget is going to be when we said it would be”. That becomes a story? No.’

The phrase ‘calm down’ was a staple of Harry Enfield’s ‘Scousers’ characters in the 1990s. The sketch revolved around three Liverpudlians in tracksuits, with two breaking into arguments and the third telling them to ‘calm down, calm down’.

Mr Gove later – more calmly –  told Sky News: ‘There won’t be an emergency budget. It is sometimes the case that the words from a prime minister or minister are overinterpreted.

‘The Prime Minister is right. We will be saying more and doing more in order to help people with the cost-of-living challenge we face at the moment, but that doesn’t amount to an emergency budget. It is part of the work of government.

‘Last night the Prime Minister convened a group of ministers – we have all done work on some of the things we could do to help. Those policy initiatives will be announced by individual departments in due course as they are worked up.’

Accused of ‘doing nothing’ for families as he defended the new legislative agenda, the PM set hares running yesterday by insisting he and the Chancellor would have ‘more to say’ on the squeeze ‘in the days to come’.

But the Treasury was bemused by the remark – stressing that it is still not clear where energy bills will ‘land’ in October and pouring cold water on the idea of an emergency Budget. One government aide said the premier seemed to have been ‘freelancing’.

Mr Johnson faces growing fury at the lack of action as inflation surges towards 10 per cent and the economy stalls, after merely pointing to the existing £22billion package of help.

He insisted he would make long-term investments rather than try to ease the immediate pain.

Instead the Parliamentary session – kicked off by Prince Charles rather than the Queen for the first time in six decades as she is suffering ‘mobility issues’ – focused on broad reforms with a smattering of crowd-pleasing policies such as bolstering police powers to tackle disruptive protests.

Schools and higher education are being overhauled to help the post-Covid recovery, while owners of unused second homes are expected to be punished, and locals given more power over housing developments.

There is also action to revive high streets, a shake-up to create Great British Railways, and a vehicle for the controversial privatisation of Channel 4 – as well as steps to ensure ‘woke’ attitudes do not hamper free speech at universities.

Sir Ed Davey has said he was surprised that the Queen’s Speech did not do more to tackle the cost-of-living crisis after the Conservatives lost hundreds of council seats last week.

The Lib Dem leader told Sky News: “I was expecting that after the people had said during the local election results they were not happy, the Government would take some action, but there was nothing for the cost of living.”

Sir Ed called on the Government to fund a VAT cut through a windfall tax on the “superprofits” of oil and gas companies.

“When these oil and gas companies are making huge profits they never expected to make, these are huge superprofits, it’s only fair to ask them to pay the money to help people who are having to pay those bills,” he said.

Asked about the Government’s apparent willingness to breach the Northern Ireland Protocol, Sir Ed said it would be an “absolute disaster” for ordinary people.

He added: “For Michael Gove and Boris Johnson and the rest of them to think that a trade war is the right way to deal with the cost-of-living crisis, an economic crisis, I don’t know what planet they’re living on.”