Met Police officers’ son, 20, who escaped prosecution for killing two men in drug-drive crash is spared jail for having £1,000 stash of cannabis at family’s £1m home

A son of two Met police officers who was previously involved in a crash that killed two men while he was drug-driving was spared jail today after he was caught with stash of cannabis.

Max Coopey, 20, from Ascot, Berkshire, stood before District Judge Samuel Goozee at Reading Magistrates Court on Friday after a police search of his home address on 31 July 2019 found more than 120g of herbal cannabis and two grams of cannabis resin in his bedroom at his parents’ £1million home.

A lawyer defending him said Coopey had used the drugs to ‘self-medicate’ in the wake of the double-fatal crash in 2018, where he hit and killed two pedestrians while driving his father’s sports car.

On 2 August 2018, Coopey, then aged 17, was at the wheel of his Met Police sergeant father’s sports car while over the limit for cannabis when he drove into sales manager Jason Imi, 48, and his colleague John Shackley, 61.

The pair had been walking back to their hotel from a work night out with their IT firm and were thrown over the roof of the Audi A5. They died the moment they hit the ground.

Although he was arrested on suspicion of causing death by dangerous driving, investigators concluded Coopey was not responsible for the men’s deaths as the crash could not have been avoided. 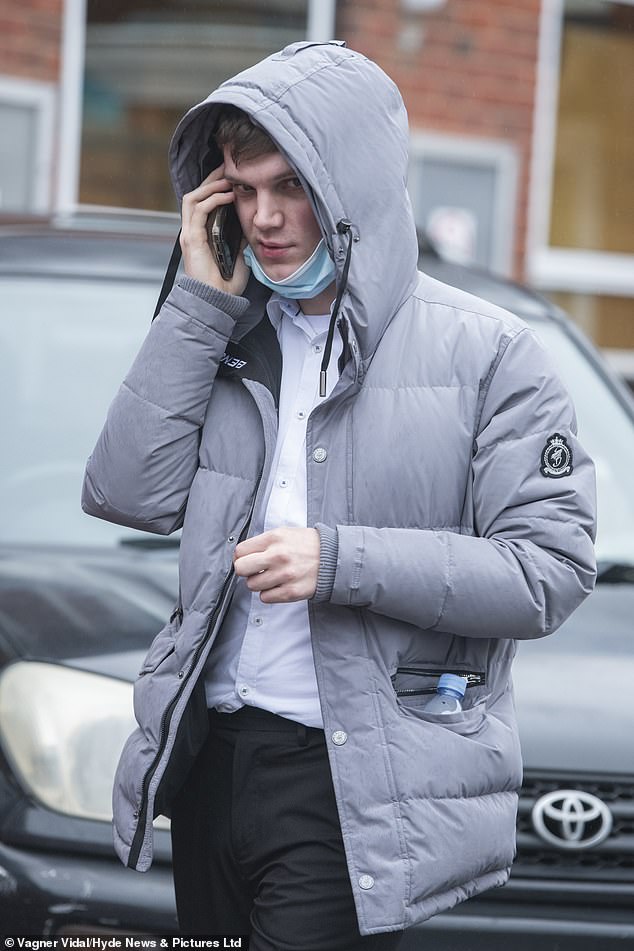 Max Coopey, 20, the son of two Met Police officers who was involved in a crash that killed two men while he was drug-driving, was spared jail today after he was caught with stash of cannabis worth approximately £1,000. Pictured in January

The case was ultimately settled at the London County Court for £800,000 on February 1 this year. It was understood the family of rugby coach and grandfather Mr Shackley were also suing.

In an inquest held on 8 July 2019, the assistant coroner for Berkshire, despite a submission by a lawyer representing the Imi family that the deaths were unlawful killing, made a conclusion of ‘road traffic collision’.

On Friday, defence barrister Chloe Hill said: ‘To put it bluntly, he was a badly-behaved and difficult teenager. He was expelled from two schools and has a criminal record.

‘Using his own words, he was “drawn to the wrong crowd”, and was often surrounded by bad influences.

‘Shortly after he left college this offence happened. During the last two years he has started to turn his life around. He has been involved in evening classes and is hoping to apply to university.

‘This offence is almost three years old, and Mr Coopey was using cannabis heavily at the time. He had been self-medicating, as the year prior he had been involved in a fatal car crash.

‘He tells me his cannabis use had made his mental health significantly worse, and is currently seeing health professionals. It’s clear that while he was an incredibly difficult teenager he is trying extremely hard to turn his life around.’

Sentencing, District Judge Goozee said: ‘You are given credit for your guilty plea today. I have regard the fact that on July 31 you had only recently just turned 18 years when you committed the offence.

‘Although it was a considerable amount of cannabis, I will be approaching it as personal use. It is clear that at the time of these offences you had been at a youth court.

‘It was a time where you turned to criminal activity, unlike now where you are trying to change your life around.’

Appearing at Reading Crown Court today, Coopey was ordered to pay a £300 fine, £85 court costs and £35 victim surcharge. The judge also made a forfeiture and destruction order for the cannabis seized at the time.

The 20-year-old admitted to possession of the cannabis, worth up to £1000, after denying the charge in a previous court appearance.

Prosecuting, Anna Fitchett said: ‘On July 31, 2019, a search warrant was executed at Mr Coopey’s home address. During the search officers discovered a large quantity of cannabis, found in his bedroom.

‘Officers found 125g of herbal cannabis, and 2g of cannabis resin. The herbal cannabis was valued between £800 to £1,000. He gave a no-comment interview and changed his plea in court today.

‘He has seven convictions for 10 offences, two unrelated but were committed when he was a youth.’

His parents, Met Sergeant Russel Coopey and Pc Catherine Coopey, were not facing any misconduct investigation over the incident.

In a statement, the Metropolitan Police Service said: ‘In relation to any DPS action arising from Max Coopey, 20, appearing at Slough Magistrates Court and/or drugs found at an address in Ascot.

‘Appropriate disclosures have been made to the Met by relatives of Max Coopey.

‘There is no related disciplinary action being taken by the Met.’

They had previously been investigated by the Met’s professional standards department over claims they had allowed or facilitated the use of a controlled drug.

The probe was in relation to an incident where Max Coopey was arrested on June 10 2018, having been found driving his mother’s car without a licence or insurance, while under the influence of drugs. Both parents were ultimately found to have no case to answer. 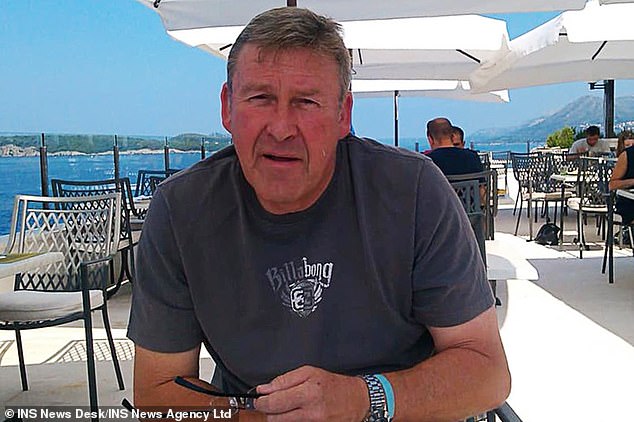 On 2 August 2018, Coopey, then aged 17 years, was at the wheel of his Met Police sergeant father’s sports car when he drove into sales manager Jason Imi, aged 48 years, and his colleague John Shackley, aged 61 years (pictured) 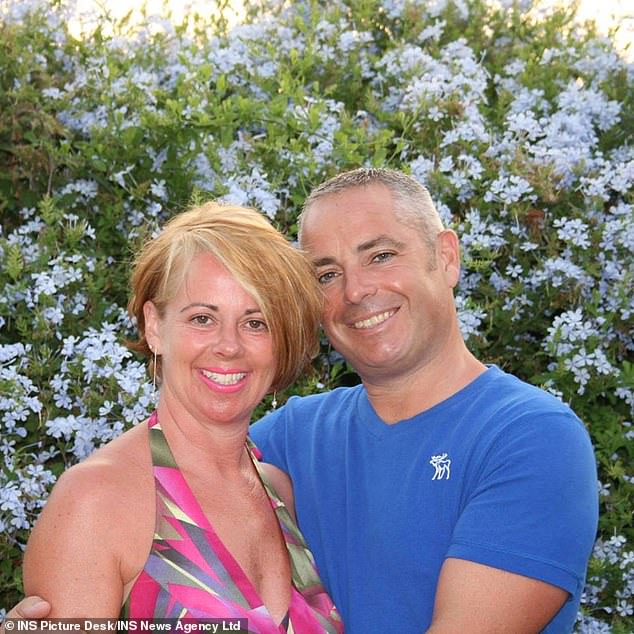 The pair had been walking back to their hotel from a work night out with their IT firm and were thrown over the roof of the Audi A5. They died the moment they hit the ground. Pictured, victim Jason Imi with his wife Sarah

Coopey was already on court bail and subject to a youth rehabilitation order at the time of the raid on his family home on The Burlings on 31 July 2019.

A police community support officer (PCSO) claimed to have seen Coopey driving on October 19 2018, two months after the fatal collision. Coopey denied the offence when TVP officers attended his home the following day.

His conviction was quashed on 18 June 2020 on the basis that the PCSO might have mistaken Coopey for one of his friends.

He was charged with driving while disqualified and appeared in court twice at court in July 2019 – on July 17 and 24 – for his trial, but it was adjourned on both occasions.

Within the week of his last court appearance, he was arrested at home over the cannabis possession.

Officers had entered his address to investigate ‘other charges’, which involved mobile phone downloads. None of those charges were being proceeded with, the court heard.

Coopey was later convicted by District Judge Davinder Lachhar of the driving while disqualified offence and for turning up late to his trial.

DJ Lachhar jailed him for 12 weeks on 29 October 29 2019 but he was released pending an appeal to the crown court.

However he was forced back to court to defend a civil claim launched by Sarah Imi, Mr Imi’s widow, who sued Coopey over her the father-of-three’s death.

On Friday, the judge fined Coopey £300, ordered him to pay £85 in costs and a £34 victim surcharge. Coopey thanked the judge and walked free from court.