It’s September and lockdown just got a lot tougher.

During days that should be full of footy and raucous fun, the streets seem particularly empty. 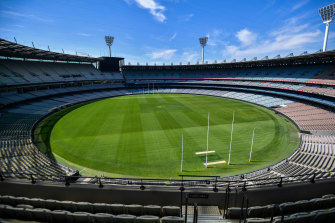 It will be an empty MCG again in September.Credit:Joe Armao

It’s a small sad marker and insignificant compared to the literal life and death consequences of COVID, but it’s now two Melbourne Septembers in a row that have felt hollow because the MCG lies miserable, quiet and abandoned.

Though my beloved Swans lost last weekend, I sympathise with Demons supporters who should be gearing up for the time of their lives but instead find the city quiet in a slightly haunting way. Meanwhile, the AFL finals are scattered across the country with the grand final to be held in Perth.

It’s not just the lost camaraderie (a word that covers up a lot of boisterous drinking and stupid behaviour). The unsettling silence around the MCG is a poignant reminder that it should be the vibrant centre of an animated city. 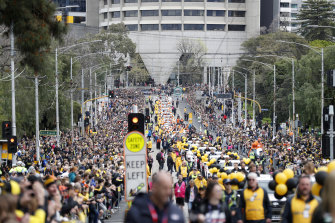 And that is more unique than we might think. For most of human history the greatest civic building in any city was its cathedral, temple or mosque. So, in the very centre of Paris stands Notre Dame. Or think the Alhambra in Granada.

After the Enlightenment, people took greater civic pride in their government and administrative buildings. This is especially true in London and Canberra where parliament sits at the core of each city.

But in the modern secular world the public building that defines us and is central to our lives is the sports arena. And the MCG is important because it lies at the heart of the city in a way other sports grounds do not.

For example, Wimbledon and Wembley are well out from the centre of London, as is Yankee Stadium in New York (a city built on commerce that radiates out from Wall Street). The SCG is close to the centre of Sydney, but nobody ever strolls there like they do to the MCG. Besides, Sydney’s emotional and cultural heart is at Bondi Beach. 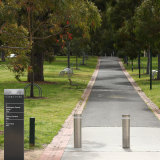 Usually teeming with supporters, the path to the ’G was empty last September on grand final day.Credit:Getty Images

Likewise, the ‘G is Melbourne’s secular cathedral. And it’s profoundly democratic. The dress code may be different in the Members’ Long Room to Bay 13, but out on the field it’s not about your bank balance, what school you went to, your religion or race (although we failed that ideal shamefully when it came to Adam Goodes). It’s purely about skill, hard work, courage, resilience, teamwork and imagination.

This makes the G’s silence this September all the more disconcerting. Despite the lockdown it remains the heart of this open pluralistic city ready to welcome people back and standing proud knowing in the words of Milton, “They also serve who only stand and wait.”

Duncan Fine is a lawyer and regular columnist