Melbourne was nudging 20 degrees by 7am and, as the city awoke, it breathed a collective sigh of relief. On walking tracks and beaches, strangers looked at each other – maskless – and grinned. Once again, we had done it.

The statewide snap lockdown – billed as a circuit breaker and ending at midnight on Wednesday – was nowhere near as tough as previous Melbourne lockdowns. But it still stung.

Photographer Chris Cincotta, who launched the wildly successful Humans of Melbourne, says we are a resilient city.Credit:Justin McManus

Business groups have warned many small and medium operators will never come back after the past year’s rolling lockdowns, and estimate the losses from the latest shutdown could be nudging $1 billion.

Through it all, Melbourne has again shown its resilience. Having technically eliminated the virus in November, we have again driven community transmission of COVID-19 into the ground (on Friday, three new cases were confirmed; all of them people already in quarantine having been exposed through close contacts).

Chris Cincotta, who launched the virally popular social media phenomenon Humans of Melbourne five years ago – he says it’s “a love letter to Melbourne” – believes individual and collective resilience has been the key to our city’s success in suppressing the virus.

In August, on the first day of what was to be a 42-day lockdown (it later stretched to 17 weeks), Cincotta took to Instagram to share a photograph of the Yarra River at sunset.

“Just in case anyone forgets, this is what we are fighting for,” he wrote. “I would love to make a pact with all of you legends. A lot of us will be spending a lot of time online in the next six weeks. It is more important now than ever that we remain positive for ourselves and our loved ones.”

The post was seen by more than 10 million people, and shared across the world. And Cincotta’s call to positivity was taken up by Melburnians from all walks of life.

From teddy bear hunts for cooped-up kids, to rainbow drawings displayed in homes’ front windows and Spoonville, what sustained our city was our willingness to create beauty in boredom.

“We are resilient,” Cincotta said. “We’re such a great city.”

Director of the Melbourne Institute Professor Abigail Payne, who has been leading research on the impacts of COVID-19 on our city for the University of Melbourne, agrees we are a hardy bunch.

“What I think has struck me [about] Australians – and this is particularly true of Victorians because we’ve gone through it more than others – [is] how compliant we are,” she said.

This has been a tale of two pandemics, though. The institute’s research has shown many of us continue to suffer the lingering effects of the COVID-19 tail. 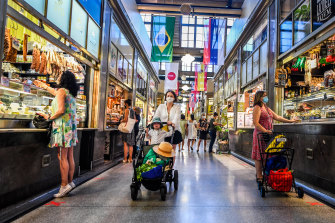 Shoppers in the Queen Victoria Market on FridayCredit:Justin McManus

Of those surveyed by the university in early February, 27 per cent suffered financial stress and were struggling to pay for basic goods and services.

The proportion of Australians vulnerable to “adverse income shocks”, already financially stressed and only just making ends meet, was 56 per cent. This was despite real GDP rising by 3.3 per cent in the September quarter of last year and Australia no longer being in recession as of December.

Professor Payne cautioned that we are not out of the woods yet; the next weeks and months will be crucial in continuing to suppress the virus and the months after the end of JobKeeper will push many individuals and businesses to breaking point.

Amid the rolling uncertainty of the past 11 months, however, many have found their strength by looking for the good. 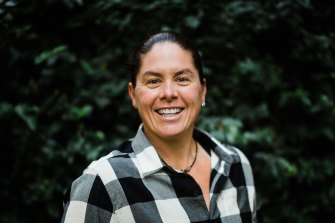 Amy Churchouse started the country’s first Good Karma Network five years ago, kicking off with a community page for residents of her home suburb of Kensington. Since then, the movement has grown to 57 networks, with some 125,000 members across Australia (most are in Victoria).

The aim of Good Karma Networks are to spread kindness, compassion and good deeds; surely a movement suited to a global pandemic that has united us in common experience while keeping us cruelly apart.

Churchouse said such movements are needed now, more than ever.

“It was a powerful tool before COVID, and I think it’s important for us to think about this in a wider context,” she said. “It’s about humans being good together. If we are a community, if we are connected, we can cope with anything.” 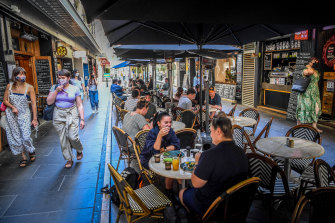 As Melinda’s health and mobility deteriorated during 2020, she was forced to stay home more and more, while the rest of the household was busy at work or school.

“The lockdown of everyone brought the household back home and forced a change with all members,” Marc said.

“It was now a case of stopping the bustle and frantic nature of life in Melbourne and spending time together. The household daily routine was filled with sounds of life and movement. This gave Melinda the opportunity to spend time, a precious resource when faced with a defined end.”

Melbourne lord mayor Sally Capp paid tribute to Melburnians, saying they have rallied together when it mattered most. 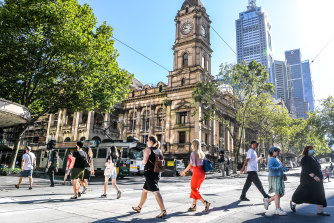 Melbourne is regaining some of its old buzz.Credit:Justin McManus

“Melburnians are some of the most resilient and caring people in Australia – if not the world,” Cr Capp said.

“We defeated a second wave of COVID and the overwhelming majority of Melburnians have done whatever it takes to keep our community safe.

“Despite the incredible pain and sacrifice so many people have made throughout the pandemic, one unifying feature has been how often we have looked to help out each other during this crisis.”

On Friday, Melbourne’s CBD was regaining some of its old buzz.

The number of pedestrians in the city was up by about 150 per cent compared with the last day of lockdown, although the number of people was still only at one-third of pre-pandemic levels.

“We will still need to continue our compassion and care for other Melburnians for many months as our city recovers,” she said.