Meet the Mag-sniff-icent Seven: These amazing dogs’ ability to smell out microscopic particles of diseases’ signature odours is giving hope to millions of sufferers

With their ears pricked back and coats ruffling in the wind, these magnificent seven dogs are spearheading scientific research giving hope to millions.

The adorable mutts gorgeous qualities are matched by their incredible talents to detect a range of medical conditions and warn of impending health attacks.

Their ability to sniff out microscopic particles of a disease’s signature odour already helps thousands of patients.

But fresh research involving the trail-blazing pooches could lead to potential treatments for Parkinson’s Disease and early diagnosis of prostate cancer.

Their skills make them more than loving pets as they are part of an 80-strong annual intake that are schooled in bio sensory detection by the Medical Detection Dogs (MDD) charity near Milton Keynes.

‘Henry has given me my life back,’ says Elizabeth Draper, who suffers from Postural tachycardia syndrome (PoTS), a heart condition that causes blackouts with no warnings.

‘I became a virtual prisoner because of the fear of blacking out near a road or at a station. I had to stop my university studies and my life was just on hold until Henry came along.’

Henry, a three-year-old Labrador, is a graduate of the MDD’s remarkable academy which fine tunes dogs’ ability to engage 300 million smell receptors in their noses to isolate scents down to the equivalent of recognising a teaspoon of sugar diluted by two Olympic-size swimming pools of water.

He was trained on samples of sweat and breath taken from 23-year-old Elizabeth immediately after attacks and is now so familiar with the tell-tale scent that he alerts her up to seven minutes before her heart palpitations start. 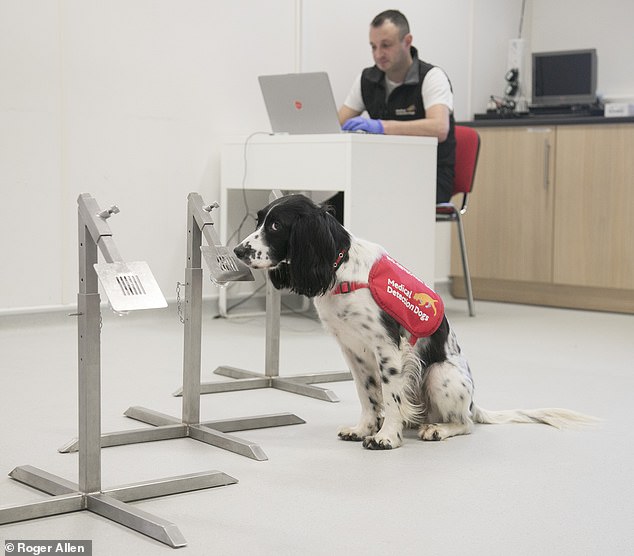 Scent dogs Freya (Malaria), being put through her paces in the training lab 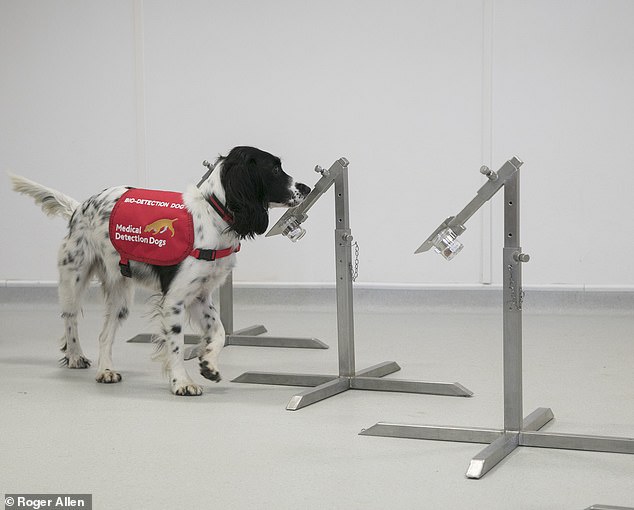 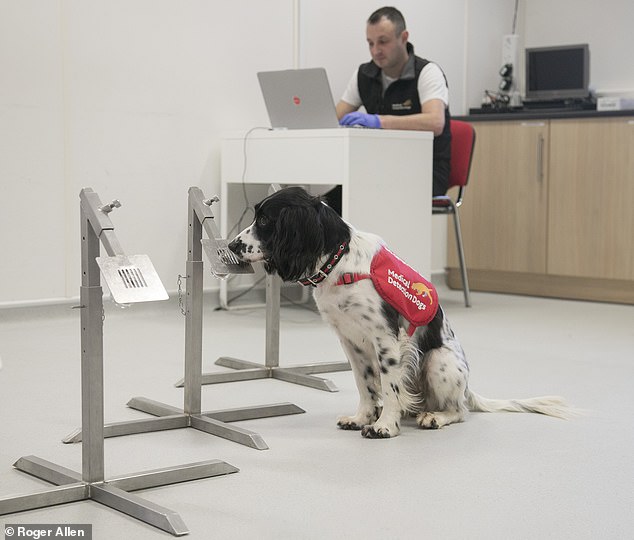 The charity has been training dogs to sniff out cancers and define when their owners’ blood sugars are heading to crisis levels for a decade.

Their latest link-ups could revolutionise research in prostate cancer and Parkinson’s.

The progressive neurological disorder, which affects more than 127,000 people in Britain and is expected to double by 2025, is without cure or a definitive test and is often only diagnosed years into its destructive cycle.

Research is being carried out with  Manchester University in a bid to discover how dogs can detect the chemical indicators of Parkinson’s.

It is hoped their skills will help diagnose patients up to 10 years before their symptoms emerge.

MDD, whose Patron is the Duchess of Cornwall, has also linked-up with the Massachusetts Institute of Technology and Johns Hopkins University, in the US, to harness the power of five of its dogs to identify prostate cancer from patients’ urine samples in a project to create an artificial biosensor. 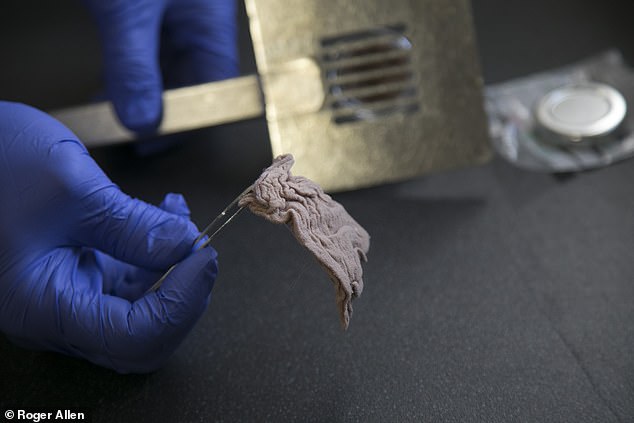 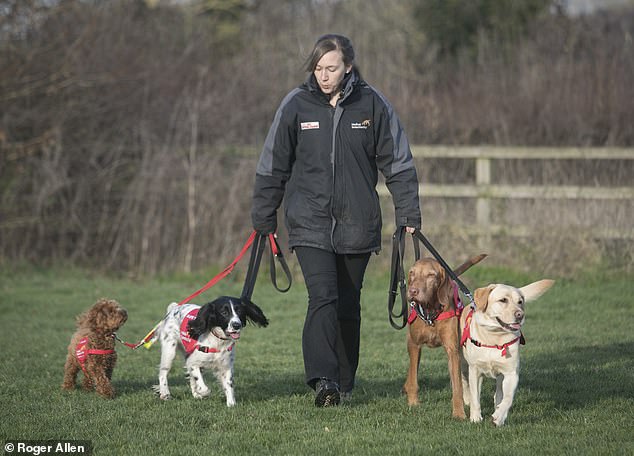 Eliza, Asher, Midas and Henry are treated to walkies at Medical Alert Assistance Dogs as they take a break from their pioneering research work

The charity has also joined forces with NHS units to train dogs to spot bacteria and pending infection in patients.

It is hoped it will act as an early warning system for the presence of superbugs such as MRSA on hospital wards.

‘These dogs are lovable animals with special abilities,’ says Dr Claire Guest, who founded the charity in 2008. ‘They can home in on the odour of disease with incredible accuracy and have already helped thousands of people regain their lives.

‘They also have the power to revolutionise the future of diagnostics and save millions of lives. They really enjoy their work be it on research programmes or alerting their owners and keeping them safe.’

The dogs have also had the royal seal of approval after the Queen was treated to a demonstration of the dogs’ phenomenal talents earlier last year at The Royal Mews to mark the charity’s 10th anniversary.

They are both family pets and life savers and come to MDD’s base at Great Horwood, Buckinghamshire, from a variety of sources including rescue centres.

Basic training is given to the dogs and then they hone in on a specific disease in a programme, which lasts an average of nine months before being homed.

Magic, a 6.5-year-old Labrador, has been trained to spot when owner Claire Pesterfield’s blood glucose levels drop too low or rise too high and she estimates his alerting has saved her life more than 4,000 times over five years.

The 45-year-old from Hitchin, who has had Type 1 diabetes since she was 13, has impaired hypo awareness which can spark dangerous attacks but Magic gives her at least 45 minutes warning so she can take action. 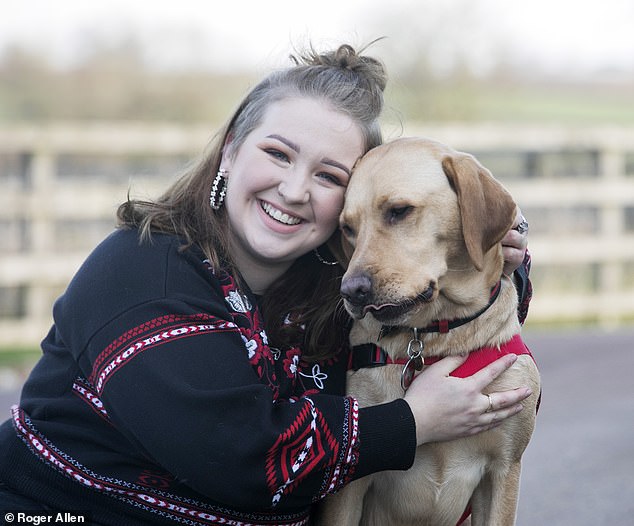 Freya, a two-year-old Springer Spaniel, who came from a rescue organisation, is nearing the end of her training to detect malaria and is able to do so with  unerring accuracy.

It is part of a research project, funded by the Bill & Melinda Gates Foundation, that could provide easy and effective screening in disease hotspots in place of the current finger-pricking and laboratory testing diagnostics.

Having a medical detection dog has totally transformed Elizabeth’s life as her condition had forced delays to schooling and university and medication had a patchy impact on controlling the condition.

But she is right on track with her education and will  complete an animal science degree at Writtle University College, near Chelmsford in Essex.

‘I blacked out so frequently that I couldn’t leave the house without someone and it wasn’t wise for me to be alone because it was too dangerous,’ says Elizabeth, from East Grinstead.

‘I missed a year of Sixth Form and then had to stop university because of several attacks, including hitting my head on the washbasin in my room. I’ve had several falls and concussions.

‘I’ve had to watch my friends leave school or graduate from university while I couldn’t even pop to the shops on my own. I had a lot of anxiety and became secluded but Henry has changed my life completely. I feel like an adult. I don’t feel like a child anymore.

‘I can leave the house, go to the shops, go to the pub without any worries because he will jump up and let me know if an attack is coming. My confidence is back and I feel happier, he is a ray of sunshine.’ 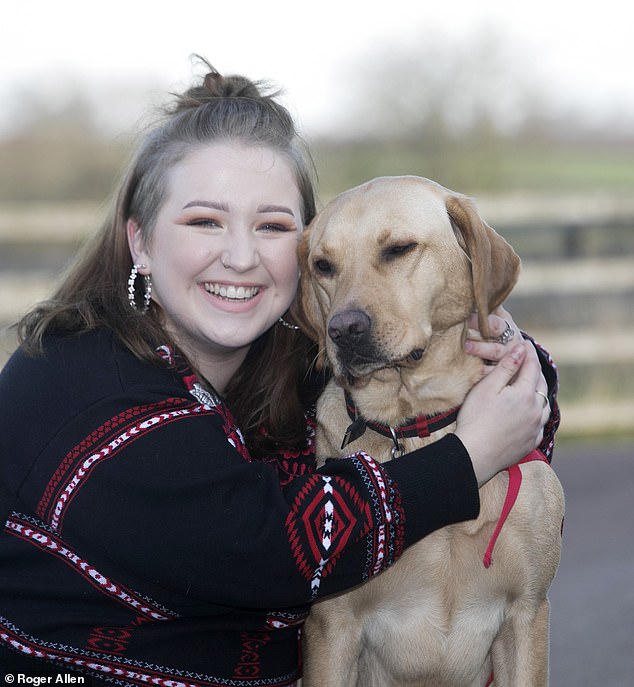 Henry has given early warnings signs on multiple attacks over the last year since linking with Elizabeth, allowing her the chance to sit down or rest in a safe position when she passes out or waits for the palpitations to subside.

Her brother James, 26, said the pooch had made a real difference to the way she lives day in day out and added: ‘Elizabeth is able to get on with her life now.

‘She is much more outgoing where as she had to sit and stay at home so Henry has been liberating for her.

‘It was disturbing for us as a family and we had that horrible feeling that it was only a matter of time before it happened somewhere bad such as next to a road.

‘I was a bit sceptical and then thought he may be able to catch one or two but Henry’s been fool proof.’