Residents looked on in horror last night as rivals battled each other with machetes in the streets of Leeds.

Police have stepped  up patrols in the Harehills area of the city after footage emerged showing a large group of men wielding 4ft long blades in running clashes.

The incident, which took place in Edgware Avenue in the city shortly after 8pm, saw armed police rush to the scene after reports of a loud bang and masked men with machetes.

By the time officers arrived the suspects had fled, although police were able to recover two machetes and a bag containing what is thought to be Class A drugs. 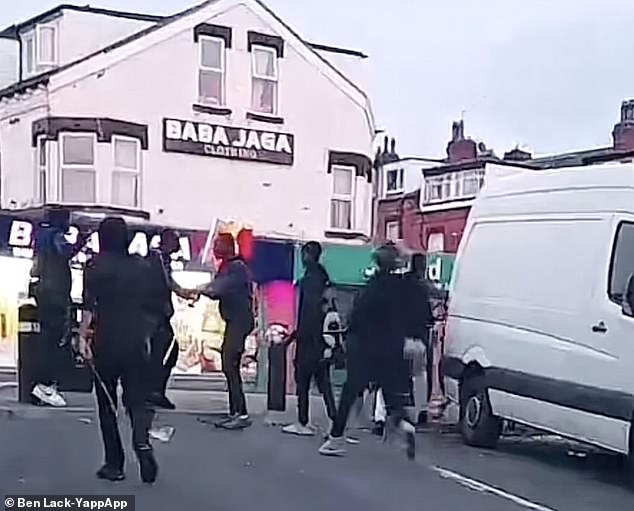 Video has emerged showing clashes between rivals in the Harehills area of Leeds last night. Pictured: Some members of the group, with two men seen grappling with each other over a machete 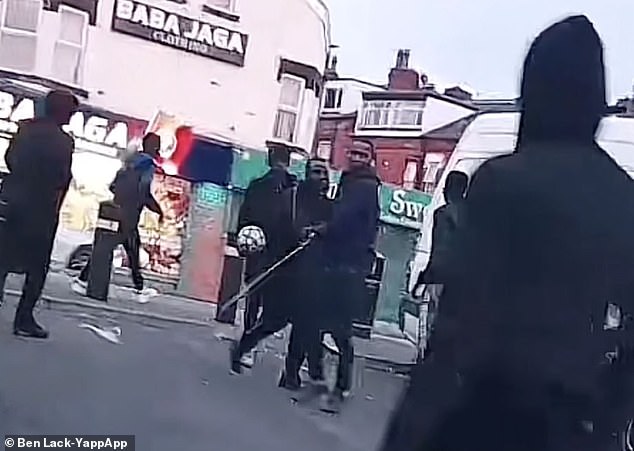 The violence happened in front of horrified residents in the inner city suburb at around 8pm. Pictured: A man can be seen holding a fearsome machete in the middle of the street 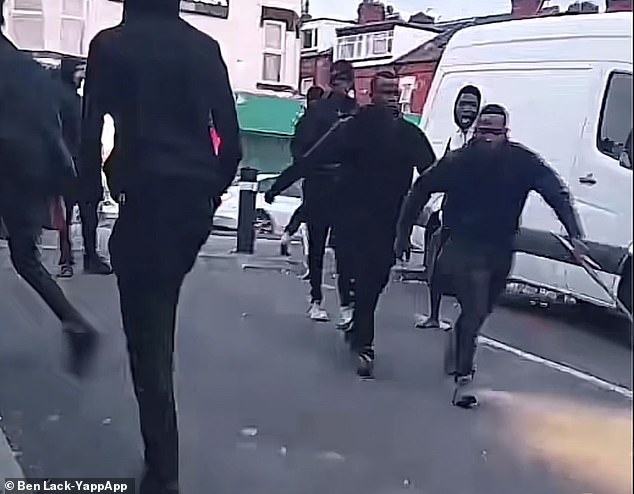 By the time police arrived at the scene the suspects involved had fled. Pictured: a man holding a machete in his left hand starts to run away

Video of the incident shows groups of men running up the street with those involved shouting at each other.

The man in the grey clothing then falls over and the man holding the machete appears to stand over him.

Other members of the group join them, one person seen grappling with a man over a machete.

In the background a man can be heard shouting the word ‘police’, while another can be heard calling for them to ‘calm down’.

West Yorkshire Police says the loud bang reported to it was caused by a brick breaking a window, and says it is searching for the men involved in the terrifying clashes.

A spokesperson for West Yorkshire Police said ‘At 8.09pm yesterday, police were called to a disturbance in the street in Edgware Avenue, Harehills, involving masked males armed with machetes.

‘A witness reported hearing a loud bang. Armed officers were deployed to the scene and confirmed the noise was a window at an address having been broken with a brick. 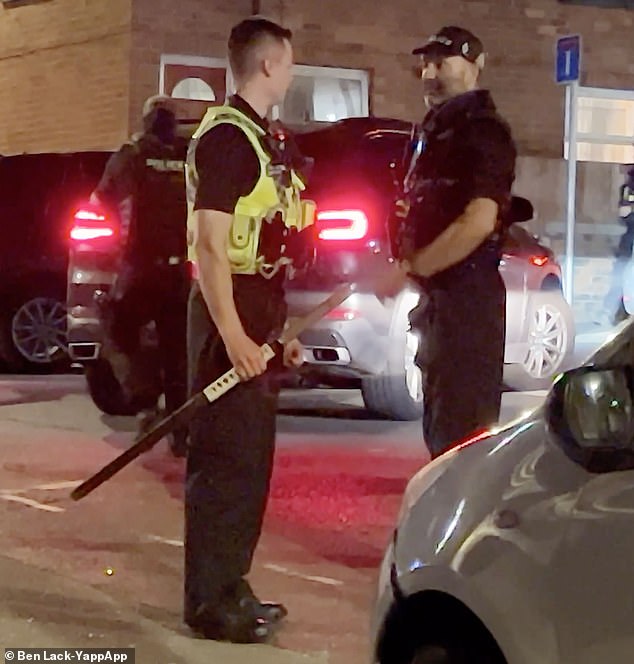 West Yorkshire Police (WYP) says it responded to reports of a disturbance involving masked men with machetes. Pictured: A police officer holding a machete found near to the scene 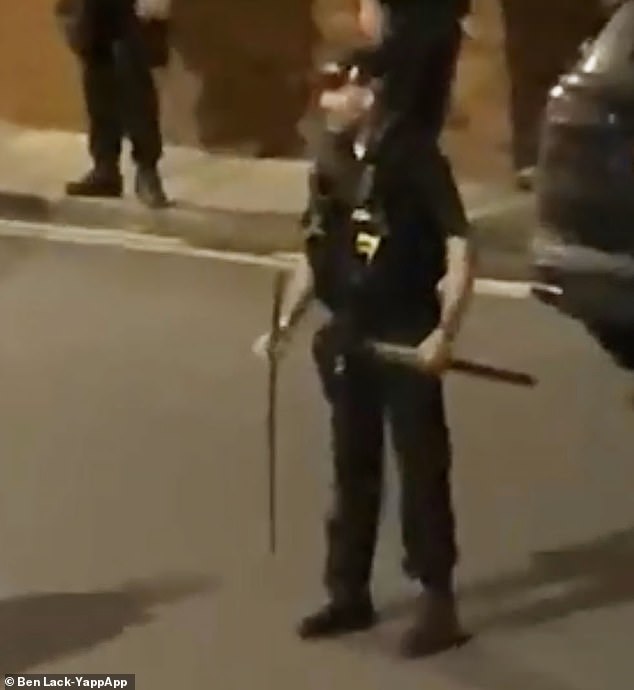 Police say they found two machetes near to the scene, as well as a bag containing what are thought to be Class A drugs. Pictured: A police officer holding one of the machetes found near the scene 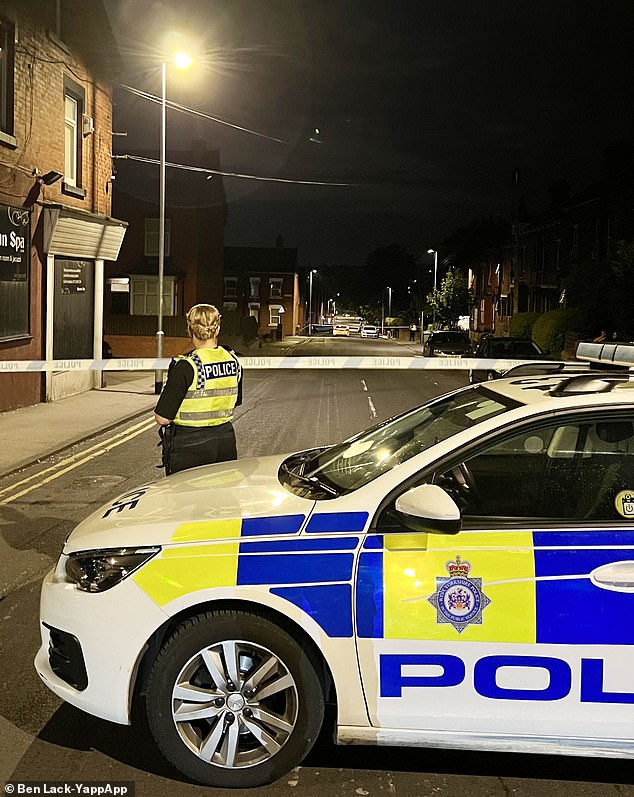 West Yorkshire Police says it has stepped up patrols in the Harehills area following the incident. Pictured: A police officer and a police car in front of a cordon at the scene last night

‘The males had run off towards Bayswater Road and Harehills Road.

‘Officers searched the area for them but no suspects were found and no one was found with any injuries.

‘Two machetes were recovered in the vicinity along with a bag containing wraps of what is believed to be Class A drugs.

‘The incident is being investigated by detectives from Leeds District CID, and officers from the local neighbourhood policing team are increasing their patrols of the area to reassure residents.’

Anyone who witnessed the incident or who has any information that could assist the investigation is asked to contact West Yorkshire Police via 101 quoting crime reference 13220465395 or online via www.westyorkshire.police.uk/101livechat.